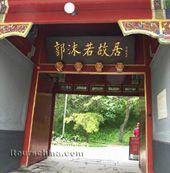 The Chinese author Kuo Mo-jo (1892-1978) was a Marxist interpreter of early Chinese society and thought and one of the major cultural figures of modern China.

In its early phase, modern Chinese literature was markedly romantic in its championship of the individual and its demand for the overthrow of the old society. Later, this dual passion was enlisted in the cause of communism, and a new literature was born that slights the romantic individual. Kuo Mo-jo is a representative figure in that, though an arch rebel and romantic in his early phase as a writer, he soon curbed his individualistic predilections to embrace Marxism and ended up after a long career in literature and politics as a sycophantic singer of praise of the Communist regime.

Born into a gentry family in Loshan, Szechwan, Kuo Mo-jo early chafed under parental and school authority and was once expelled from school for insubordination despite his excellent academic record. He was constrained by his parents to marry a complete stranger who appeared to him utterly repulsive. This distasteful experience precipitated his decision, despite his defective hearing, to study medicine in Japan. He thought, with many patriotic youths of his time, that medicine was one of the best ways to strengthen his country. He arrived in Japan in 1913, and while studying for his degree, he read on his own a great deal of literature, especially the German and English romantic poets. Supporting a wife and a growing family on a government scholarship, he began to entertain thoughts of a literary career because of the manifest success of the new literary movement in China since 1917. In 1921 he formed the Creation Society (Ch'uang-tsao shê) with his friends in Japan: Yü Tafu, Chang Tzu-p'ing, Ch'eng Fang-wu, and T'ien Han.

In the same year Kuo published a volume of poetry entitled Nü-shen (Goddesses) and a translation of Goethe's Sorrows of the Young Werther. Both books captured instant Chinese attention. In the next year the Creation Society launched Ch'uang-tsao Chi-k'an (Creation Quarterly), which espoused romanticism and art for art's sake in conscious opposition to the championship of a realistic and humane literature by a rival group, the Society for Literary Research. The magazine, which ceased publication after only six issues, was succeeded by several other Creationist journals, including Hungshui (The Deluge) in 1925 and Ch'uang-tsao Yüeh-k'an (Creation Monthly) in 1926. Active in all Creationist enterprises, Kuo wrote prolifically in all types of writing during the early phase of the society.

In the 1920s Kuo was acclaimed primarily for his poetry. In such ambitious poems as "The Hound of Heaven," "The Nirvana of the Phoenixes," and "Earth, My Mother," he resorts at once to Western and Chinese mythology and a modern scientific vocabulary to imitate Shelley and Whitman. With equal fervor he sings the chaos of modern city life, the imminent collapse of the present society, and the rhapsodic vision of a future humanity. In the more subdued nature poems of this period the influence of Goethe and Tagore is apparent.

Kuo wrote that he was converted to Marxism in 1924 after reading a book by a leading Japanese Marxist. Certainly by 1925, the year that marked China's massive resistance to imperialist exploitation in the so-called May Thirtieth movement, Kuo and several other Creationists had become active in politics and openly advocated a revolutionary literature.

That year Kuo left Shanghai for Canton to serve as a dean in Sun Yat-sen University, and in the next year he joined the Northern Expedition against the warlords as a propagandist in the Political Department of the Revolutionary Army Headquarters. At that time the Kuomintang and the Communist party were in close cooperation, and many revolutionary writers besides Kuo participated in the expedition; it was only after the forcible expulsion of Communists from the Kuomintang government in 1927 that these disillusioned veterans returned to their literary career with the avowed purpose of propagating Communist revolution.

Kuo fled to Japan in February of 1928. With the critic Ch'eng Fang-wu, he continued to direct the Creation Society until it was forced to disband by government order a year later. A political refugee unable to freely express his views in Chinese publications, Kuo turned to translation and, more fruitfully, to a study of ancient Chinese society and thought with the aid of archeological findings and Marxist notions about feudal society. While his interpretations and conclusions are debatable, Kuo's series of classical studies, which continued until the 1940s, certainly mark him as a scholar of intellectual vigor.

War Years and After

When the Kuomintang government and the Communists again agreed to cooperate on the eve of the Sino-Japanese War in 1937, Kuo deserted his Japanese wife and children and returned to China a vindicated hero. He was now entrusted with important government functions, first as head of the Third Department (in charge of propaganda) in the Political Training Board of the National Military Council and, from 1940 on, as chairman of the Cultural Work Council and, also beginning in 1940, as chairman of the Cultural Work Committee. Still in charge of propaganda, he now enjoyed much less power owing to the worsened relations between the Nationalists and Communists.

Nevertheless, Kuo did much to promote the Communist cause in the early 1940s, especially in his role as a playwright. He had written closet dramas in the 1920s; now he again turned to historical themes to write plays that would rouse the patriotic sentiment and include veiled antigovernment and pro-Communist propaganda. These plays, notably T'ang-ti chih hua (The Devoted Siblings) and Ch'üYüan, were great commercial successes and ushered in the trend for historical plays in wartime China.

Kuo Mo-jo visited the Soviet Union in 1945 and stayed in Hong Kong during the civil war between the Chinese Nationalists and Communists. On the eve of the Communist victory in 1949, he returned to China as its ranking man of letters, and with the establishment of the People's Republic, he was awarded many honors and positions: vice-premier of the State Administration Council (1949-1954); chairman of the All-China Federation of Literary and Art Circles; and president of the Academy of Sciences, the nation's leading research organization.

Kuo was thus, at least until the cultural revolution in 1966, nominally in charge of all creativity and research in China. But actually he was a front man for the Communist party and enjoyed little exercise of power. His verses and public utterances after 1949 suggest something of a sycophantic clown, a fool in Mao Tse-tung's court.

On the eve of the cultural revolution, Kuo recanted his entire literary career, declaring that all his publications deserved to be burned. This apparently saved him from the ignominy of persecution that soon was inflicted upon nearly all the ranking writers and artists of the nation. Over the years Kuo had been writing a long autobiography in several volumes, a document of great historical interest, but it seemed unlikely that he would continue with the story to cover the post-1949 years. He died on June 12, 1978, in Peking (now Beijing).

Aside from Kuo Mo-jo's Selected Poems from "The Goddesses" (1958) and Ch'üYüan: A Play in Five Acts (1953), there are only a score of poems and a few stories available in English in such anthologies as Kai-yu Hsu, ed., Twentieth Century Chinese Poetry: An Anthology (1963). A good critical study is Milena Dolezelová-Velin-gerová, "Kuo Mo-jo's Autobiographical Works," in Jaroslav Prušek, ed., Studies in Modern Chinese Literature (1964). David Tod Roy, Kuo Mo-jo: The Early Years (1971), is a detailed intellectual biography of Kuo's early life. Most accounts of modern Chinese literature include a discussion of Kuo Mo-jo. Among these Liu Wu-chi's supplement to Herbert Allen Giles, History of Chinese Literature (1966), gives the most rounded treatment, while Chihtsing Hsia, A History of Modern Chinese Fiction, 1917-1957 (1961), offers the most trenchant criticism. □

Zhu De , Zhu De (1886–1976) Chinese communist military leader. Zhu helped to overthrow (1912) the Manchu dynasty. In 1922, he met Zhou Enlai and joined the Ch… Joseph Warren Stilwell , Joseph Warren Stilwell (1883-1946) was the Army officer in charge of U.S. affairs in China during World War II. Joseph Stilwell was born on March 19,… Chiang Kai-shek , Chiang Kai-shek Chiang Kai-shek (1887-1975) was a Chinese nationalist leader. For 2 decades he was head of state on the Chinese mainland, and after 1… Tibet , Tibet Tibet has been an independent country throughout the historical period and since time immemorial according to Tibetans' own myth-based sense of… Wang Ching-wei , Wang Ching-wei The Chinese revolutionary leader Wang Ching-wei (1883-1944) was an early follower of Sun Yat-sen and served as president and prime min… Deng Xiaoping , Deng Xiaoping Deng Xiaoping Guangan, Szechwan Province, China Died February 19, 1997 Beijing, People's Republic of China Leader of the People's Repub…