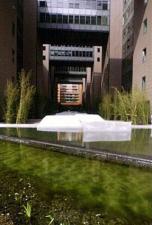 The Japanese architect Arata Isozaki (born 1931) developed a style which reflected both Japanese traditions and Western post-modern and mannerist influences. Isozaki also wrote about architecture and taught in several universities.

Arata Isozaki was born in Oita City, Japan, in 1931. He studied with Kenzo Tange, one of Japan's leading modern architects, at the University of Tokyo from 1950 to 1954. He continued to work for and with Tange as a graduate student at the university and then in the older man's firm from 1954 to 1963. At that point Isozaki established his own practice but did not disassociate himself from his mentor, continuing to design occasionally for Tange into the 1970s. This attitude is in keeping with native Japanese practices that stress collaboration and cooperation, rather than competition, among professionals.

Nearly all of the leading 20th-century Japanese designers have attempted to synthesize indigenous traditions with Western forms, materials, and technologies. Isozaki's "style" has in fact been a series of modes that have come as a response to these influences. As a young architect he was identified with Metabolism, a movement founded in Japan in 1960. However, Isozaki minimized his connections to this group, seeing the Metabolist style as overly utilitarian in tone. By contrast, in the 1960s, Isozaki's work featured dramatic forms made possible through the employment of steel and concrete but not limited aesthetically by those materials. His designs of branch banks for the Fukuoka Mutual Bank of the mid-1960s are characteristic of this early phase of Isozaki's career. The Oita Branch Bank (1966) is representative of the group: its powerful cantilevered upper stories are more characteristic of his English contemporary James Stirling that of any of his fellow Japanese architects.

In the 1970s Isozaki's architecture became more historical in its orientation, suggesting a connection with the burgeoning post-modern movement of Europe and the United States. His sources included classical Western architects, especially Andrea Palladio, Étienne-Louis Boullée, and Claude-Nicolas Ledoux. These connections Isozaki did acknowledge, and his work of the 1970s represents a mature synthesis of formal, functional, and technical considerations. A representative work of this period is his Fujimi Country Club, Oita City, constructed in 1973, which displays the love of pure form that also characterizes 18th-century French neoclassicism. Another French principle, architecture parlante (architecture that bespeaks its function), is also at work at Fujimi: by massing the building in the shape of a question mark, Isozaki commented wittily on his incomprehension of his countrymen's obsession with golf.

Later, his Western influences were decidedly mannerist, with Giulio Romano and Michelangelo replacing the classicists as sources. Isozaki's Tsukuba City Center of 1979-1983, located in Ibaraki, is a complex of buildings clearly indebted to Michelangelo's Campidoglio in Rome, but not at all limited by it. Chosen as project director for this urban development, Isozaki created a design that included large, colorful buildings, a large plaza, and a sunken garden that provides as clear a statement of post-modern aims as any project built in Europe or the United States.

This new-found fascination with what post-modern guru Robert Venturi called "complexity and contradiction" coincided with Isozaki's interest in building outside of his native country. His Los Angeles County Museum of Contemporary Art (1984-1985) may be the best known structure by a Japanese designer in America. Isozaki was, in fact, one of only a handful of Japanese architects to have some impact in the West. In June 1997 the MOMA celebrated its 18th years by honoring 18 individuals, including creator Isozaki.

Isozaki's popularity and prestige as an architect is reflected in the commissions he took throughout the U.S. and Europe. He was a part of a cadre of exclusive architects enlisted by Disney to design buildings throughout the U.S. His creation stands just outside Orlando. The only house he has designed outside of Japan listed for $1.3 million in 1997. Isozaki was one of a team of world-famous architects to design two huge business complexes on Berlin's Potzdamer Platz. He branched out by designing the sets for the Lyon Opera's production of Madama Butterfly. Beside the Barcelona Olympic stadium is the Games' most striking structure—the $100-million Sant Jordi sports palace designed by Isozaki for the 1992 Olympics. Its 3,000-ton roof was raised by a dozen hydraulic jacks over a period of 20 days to a height of 45 m. The result is an airy structure whose undulating white roof is pockmarked by 100 transparent bubbles that flood its interior with daylight. When it opened in 1990, 300,000 local people came to view it. Domus, or the House of Man, the interactive science museum in La Coruna, a northern Spanish city 600 km from Madrid. Set on a dramatic rocky site overlooking the Atlantic, the museum is housed in a towering pink-and-gray granite building designed by Isozaki.

Other buildings in the West designed by Isozaki include museums in Nice, Cario, as well as Los Angeles, and Brooklyn (NY), the American Pavilion at the Venice Biennale, and the Palladium discotheque in NY. Charles Jencks, an American critic noted Isozaki has taken the style of the West one step further. By carrying Western concepts to their logical conclusion, Japanese architects introduced new elements. Reyner Banham explains that "it is the marginal minor differences in the thinkable and the customary that ultimately make Japanese architecture a provokingly alien enclave within the body of the world's architecture."

Isozaki's excellence was recognized in his native country and around the world. One of the honors he received was the Asahi award, given to individuals who make significant and lasting contributions to Japanese culture. He was also a multiple winner of the Annual Prize awarded by the Japan Architectural Association. Since the early 1970s there have been several one-man shows honoring Isozaki's work, including a London retrospective (1976).

Nippon Telegraph and Telephone Corporation in Tokyo announced plans for a new gallery, with an opening exhibit by Isozaki called "The Mirage City." In January 1995, a Japanese art and technology center was opened in Krakow, Poland by President Lech Walesa and members of Japan's imperial family, Prince and Princess Takamado. The center, designed in the shape of an ocean wave, was designed free of charge by Isozaki.

Isozaki was a visiting professor at several Japanese and American institutions, including the University of California at Los Angeles, the Rhode Island School of Design, Columbia University, and the University of Hawaii. He also wrote extensively about his architecture and the principles behind it (although, unfortunately, few of these writings have been translated).

Arata Isozaki was instantly recognizable by his distinctive style of dress. He often wore traditional Japanese clothing, and he favored the color black. He appeared on the cover of the New York Times Magazine in 1986, dressed in a "dazzingly" fashionable Issey Miyake creation. By presenting himself as being sartorially distinct from the crowd, Isozaki provided a contemporary parallel to the flamboyant Frank Lloyd Wright, the famous American architect (and admirer of Japanese culture) who continued to affect Victorian dress long after it passed out of style.

An excellent source for background information on recent trends in Japanese architecture is Contemporary Architecture of Japan: 1958-1984 by Hiroyuki Suzuki, Reyner Banham, and Katsuhiro Kobayashi (1985). This book also contains many fine quality black and white illustrations. For additional general background, see also Udo Kulterman's New Japanese Architecture (London: 1960) and New Directions in Japanese Architecture by Robin Boyd (1968). For an extended treatment of the architect's work, consult Philip Drew's The Architecture of Arata Isozaki (1982). A special issue of Architectural Design (London: January 1977) was devoted to Isozaki. A recent review of Isozaki's achievements can be found in Paul Goldberger's article, "Profiles: Arata Isozaki," in Architectural Digest (March 1989). The architect wrote extensively about architecture in his native language, but only a few of these writings have been translated into English. These include "About My Method," "A Metaphor Relating with Water," and "Formalism," all published in The Japan Architect (1972, 1978, and 1979, respectively). □

oxford
views updated
Isozaki, Arata (1931– ). Japanese architect. His work has drawn on a wide range of sources, as he has held that anything in the history of architecture is fair game for quotation and/or interpretation. His syntheses of Western and Japanese themes, concentrating on clarity of geometry and stereometrically pure forms, have been impressive. He was loosely associated with Metabolism before he established his reputation with the Fukuoka Mutual Bank, Oita (1965–7). Other works followed, including Gunma Prefectural Museum of Fine Arts, Takasaki (1971–4), Kitakyushu City Museum of Art (1972–4), and the West Japan General Exhibition Centre, Kitakyushu (1975–7). In the Kitakyushu Central Library (1972–5) and the Fujimi Country Club House, Oita (1973–4—planned as a question mark), he began to experiment with vaulted structures. Fragmentary quotations from historic buildings (notably from Ledoux) began to be used in his work, e.g. the Tsukuba Civic Centre (1978–83), and his architecture became more sculptural, as with the headquarters of the Disney Corporation, Buena Vista, Orlando, FL (1989–92). Other buildings include the Museum of Contemporary Art, Bunker Hill, Los Angeles, CA (1981–7), the Museum Nagi MoCA, Nagicho, Okayama, Japan (1992–4), the Concert Hall, Kyoto, Japan (1992–5), and Domus: La Casa del Hombre, La Coruña, Spain (1993–5).

Charles Willard Moore , American postmodern architect and educator Charles Willard Moore (1925-1993) is noted for his eclectic range of historicist buildings, each of which… Fumihiko Maki , Architect Fumihiko Maki (born 1928) came to prominence in the 1960s, a period of growth and vibrancy in Japanese architecture. Although still identif… Cesar Pelli , Cesar Pelli Acclaimed by the American Institute of Architects (AIA) in 1991 as one of the ten most influential living American architects, Cesar Pell… Japanese Architecture , Japanese architecture, structures created on the islands that constitute Japan. Evidence of prehistoric architecture in Japan has survived in the for… Rem Koolhaas , Koolhaas, Rem Architect Rem Koolhaas is considered by his many followers to be the coolest, hippest, and most cutting-edge architect on the planet. B… Japan , Culture Name Orientation Identification. The Japanese names, Nihon and Nippon, are alternative readings of written characters that mean "origin of th…