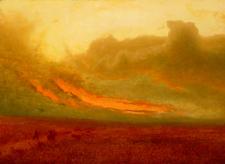 Alexander Helwig Wyant (1836-1892) was one of the outstanding American landscape painters of the late 19th century. His fascination with luminous atmospheric effects led to the creation of a subtle and poetic style.

Alexander Wyant was born on Jan. 11, 1836, in Port Washington, Ohio. The family soon moved to Defiance, where Wyant briefly attended the local grammar school and was later apprenticed to a harness maker. His childhood aptitude for drawing was not encouraged, but after a chance encounter in 1857 with some paintings by the landscapist George Inness, Wyant decided to seek the older artist's guidance. Essentially self-taught, Wyant was able to obtain some encouragement from Inness and small financial assistance from Nicholas Longworth, the Cincinnati patron of innumerable American artists of the period. By 1864 Wyant was listed among the contributors to the National Academy of Design exhibitions.

In 1865 Wyant visited Europe and studied briefly with Hans Gude at Karlsruhe, but the prevailing German taste for highly finished storytelling pictures with a rather dark tonality evidently did not attract him. Visiting England and Ireland on the way home, Wyant no doubt saw and learned from the paintings of John Constable and the English landscape school, but an intense and individual naturalism is the dominant quality of Wyant's early work. An outstanding example of this phase of his development is Mohawk Valley (1866). He became a full member of the National Academy in 1869.

Interested in America's newly opened western lands, Wyant took a sabbatical from his prospering career and joined a government expedition to Arizona and New Mexico in 1873. En route there, he was subject to exposure and unusual hardships, which evidently brought on the illnesses plaguing him for the rest of his life. His right side was paralyzed, which necessitated that he learn to paint with his left hand. Most remarkably, after 1873 Wyant's style became more intimate and less concerned with aerial perspective and panoramic views. The naturalistic, even photographic effects of the early work gave way to simplified brushwork, a use of broken color, and bolder designs. The later "impressionistic" studies of autumn effects, views in the Adirondacks or along the Ohio River, and the pictures such as Driving Mists and Moonlight and Frost brought him honors at home and abroad.

Wyant married Arabella Locke in 1880, and they had one son. His later years were uneventful and solitary. Physical infirmities restricted his activities, although he continued to paint each summer in the Catskill Mountains and in his New York studio in winter. He died on Nov. 29, 1892.

The two books of Eliot Clark, Alexander Wyant (1916) and Sixty Paintings by Alexander H. Wyant (1920), are the pioneering studies of the artist. No recent objective appraisal of Wyant's art has been made, except for the brief attention given him in Edgar P. Richardson, Painting in America (1956). □

Alexander Of Tralles , Alexander of Tralles (b. Tralles, in Lydia, first half of the sixth century a.d.; fl. in the time of Justinian) medicine. Alexander of Tralles was th… Alexander The Great , Alexander the Great Alexander the Great Alexander the Great (356-323 B.C.) was the king of Macedon, the leader of the Corinthian League, and the conq… Alfred Sisley , Sisley, Alfred Alfred Sisley (1839–1899) was a key painter of the early Impressionist period, a friend and associate of Claude Monet and Pierre Renoi… George Caleb Bingham , George Caleb Bingham The American painter George Caleb Bingham (1811-1879) depicted life in Missouri around the middle of the 19th century. His best-… William Sidney Mount , William Sidney Mount (1807-1868), one of America's first and best anecdotal painters, portrayed rural life on Long Island. William Sidney Mount was b… Grover Cleveland Alexander , Alexander, Grover Cleveland 1887-1950 American baseball player Grover Cleveland Alexander serves as an icon for his generation of professional baseba…