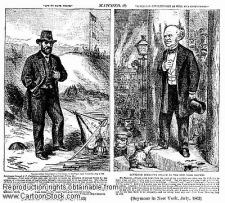 Horatio Seymour (1810-1886), a governor of New York, was a leading figure in the Democratic party. He owed his influence to his absolute integrity and his ability to bring conflicting factions together.

Horatio Seymour was born of a well-to-do family (his father was a banker) in the frontier village of Pompey Hill, N.Y., on May 31, 1810. He was admitted to the bar but practiced only briefly. From 1833 to 1839 he served as military secretary to New York governor William M. Marcy, his lifelong friend.

In 1841 Seymour entered the lower house of the New York Legislature. Although the conflict between two party factions endured for nearly 2 decades, Seymour was one of the few leaders capable of reconciling them even temporarily. Since he never sought to create a personal following through the use of patronage and generally followed a moderate course, he was able to command wide respect. He served as Speaker from 1845 to 1847 and in 1850 was elected governor, serving for two terms.

In national politics Seymour used his influence to preserve Democratic party harmony by supporting candidates, such as James Buchanan, who took the position that the Federal government lacked the power to regulate slavery. At the outbreak of the Civil War, he supported the Union cause but only in the expectation that a peaceful settlement would be arranged.

In 1862 Seymour was again elected governor, defeating a Radical Republican. Although he criticized Abraham Lincoln's excessive use of executive power and condemned the Emancipation Proclamation (which he ascribed to abolitionist influence), he worked diligently to fill New York's troop quotas for fighting the Civil War. Erroneous reports (propagated by Radical Republicans) that he had failed to take strong measures to repress the draft riots of 1863 in New York City because he wished to aid the Southern cause led to his defeat when he sought reelection in 1864.

In 1868 Seymour was nominated as the Democratic candidate to run against Ulysses S. Grant in the presidential election. A compromise candidate, he repudiated the party's written platform during his campaign. In spite of this action, he lost the election by a margin of only 300,000 votes. Refusing further offices, he continued to be a major influence in party politics. He aided Samuel J. Tilden in breaking the Tweed ring and backed efforts to reform Tammany Hall. He died in Albany on Feb. 12, 1886.

Edward I. Koch , Edward I. Koch Edward I. Koch (born 1924) was one of New York City's most controversial mayors. He led the city from the edge of bankruptcy in 1978 t… Mario M. Cuomo , Mario Matthew Cuomo Mario Matthew Cuomo Mario Matthew Cuomo (born 1932) was a progressive Democrat governor of New York state from 1982 to 1994. He e… Roscoe Conkling , Conkling, Roscoe CONKLING, ROSCOE Roscoe Conkling was for many years in the late nineteenth century the most powerful politician in the most powerful… Nancy Patricia Pelosi , Politician Nancy Pelosi is the first woman in American history to lead a political party in Congress. She has served the U.S. House of Representative… Thurlow Weed , Thurlow Weed Although he held only a few minor offices, American politician Thurlow Weed (1797-1882) was a leading figure in the Whig party and later… Alexander Hamilton , Hamilton, Alexander Secretary of the U.S. treasury, political leader As the nation's first secretary of the treasury under President George Washingto…