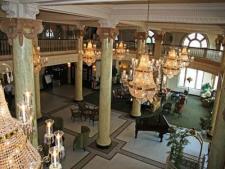 Utica, city (1990 pop. 68,637), seat of Oneida co., central N.Y., on the Mohawk River and the Erie Canal, in a large dairy region; inc. 1862. It is a port of entry, and its manufactures include electrical, electronic, and consumer goods; transportation and medical equipment; machinery and tools; leather, canvas, paper, metal, and stone products; and textiles. Settled in 1773 on the site of old Fort Schuyler (1758), it was destroyed (1776) in a Native American and Tory attack and resettled after the Revolution. Its location on the Erie and other canals and on the railroads stimulated its industrial development.

Like the string of industrial towns and cities from southern New England through upstate New York and into the Midwest, Utica has experienced a major reduction in manufacturing activity in the past several decades, leading to serious financial straits. However, since the late 1990s there has been considerable revitilization of the downtown area, as well as new manufacturing facilities and commercial development, both in Utica itself and in the surrounding suburbs. The Munson-Williams-Proctor Arts Institute is there, and Utica has an extensive park system. It is the seat of Utica College (a branch of Syracuse Univ.) and the State Univ. of New York Institute of Technology.

Utica (yōō´tĬkə), ancient N African city, c.25 mi (40 km) NW of Carthage. According to tradition, it was founded by Phoenicians from Tyre c.1100 BC Second in importance to Carthage, Utica usually allied itself with that city, but in the Third Punic War it sided with Rome against Carthage. Upon the destruction of Carthage (146 BC), Utica was made the capital of the Roman province of Africa. It fell (AD 439) to the Vandals, was recaptured (534) by the Byzantines, and was finally destroyed (c.700) by the Arabs. Excavations at the site have yielded two Punic cemeteries and Roman ruins, including baths and a villa with mosaics.