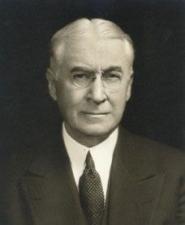 
Bernard M. Baruch (1870–1965) used his extraordinary talent as a stock market speculator to amass a sizable fortune at an early age. A generous contributor to the Democratic Party, he achieved influence and renown as an informal, and formal, consultant and adviser to the White House.

Born in Camden, South Carolina, in 1879, Baruch was the son of a doctor in the Confederate Army, and a descendant of one of the few Jewish families in South Carolina. The family moved to New York City when Baruch was eleven. He attended public schools and, in 1889, graduated from the College of the City of New York.

Baruch's interests in business and finance were evident early. He began his Wall Street career in the 1890s, as a runner for the firm A.A. Houseman & Co., which later merged into what became Merrill Lynch. He ventured out entirely on his own in his late twenties, and by the age of 30 he was on his way the becoming a very wealthy man. Baruch made his money as a speculator, often by selling short. Shrewdly and boldly playing the markets in copper, railroads, and sugar, sometimes with the help of insider tips, Baruch accumulated a $15 million fortune by the outbreak of World War I (1914–1918).

As his fortune increased, Baruch became more cautious and, in some instances, tended to sell early. During the stock market crash of 1929, his financial assets fell from more than $22 million to about $16 million, but his maxim, "run quickly" enabled him to escape Wall Street's free fall relatively unscathed. He continued to invest in the stock market throughout his life. Though he continued to build on his substantial wealth, he never became, as many believed from Baruch's very effective self-promotion, one of the richest men in America.

Baruch's wealth did not blind him to the world outside the stock market. He played an active role in the great events of his time. For most of his long life, he dedicated much of his time and efforts to public service. Still in his early thirties in 1912, Baruch became an informal adviser to President Woodrow Wilson (1913–1921). In 1916 Wilson appointed him to the Advisory Commission of the Council of National Defense, and then made him chairman of the War Industries Board in 1917. In 1919, following the end of World War I, Baruch was appointed to the Supreme Economic Council at the Versailles Peace Conference, a meeting of world leaders to set the terms of the German surrender, and he advised Wilson on terms of the peace.

In the 1930s, with the Democrats back in the White House, Baruch maintained a long, but not close, relationship with President Franklin Roosevelt (1933–1945). When World War II (1939–1945) broke out, Roosevelt called on the expertise Baruch developed through his running of the War Industries Board during World War I to advise the government on wartime economic mobilization. Among his other contributions to the war effort, Baruch was instrumental in a successful effort to overcome bottlenecks between the United States and several South American countries, obtaining rubber imports vital to the war effort.

In 1946, after World War II ended, Baruch was asked by President Harry Truman to head the American delegation to the United Nations Atomic Energy Commission, a group representing the major world powers, established to find international control mechanisms for the use and proliferation of nuclear energy. His proposal to control atomic energy, known as the Baruch Plan, required that any agreement on atomic weapons must contain veto-proof sanctions on offenders and include provisions for inspection of all atomic facilities. The then-Soviet Union could not accept these conditions, and Baruch's plan was rejected by a United Nations vote on New Year's Eve 1946.

Baruch's 40-year career as a close adviser to U.S. presidents gave him a reputation as "the parkbench sage," and he was one the most respected men of his time. When he died at age 94 in 1965, he had come to represent to many Americans the personification of the term "elder statesman."

American statesman Bernard Mannes Baruch (1870-1965), a successful financier, served as chairman of the War Industries Board during World War I. After World War II he was U.S. representative to the United Nations Atomic Energy Commission.

On Aug. 19, 1870, Bernard Baruch was born in Camden, S.C. His father, Simon Baruch, had been a surgeon in the Confederate Army, while Bernard's mother came from an old South Carolina family. The Baruchs left South Carolina for New York City when Bernard was a small boy, and he received his education in the public schools. He graduated from the College of the City of New York in 1889 and soon joined the Wall Street brokers A.A. Houseman and Company. Beginning as a "runner, " Baruch rose rapidly to partnership in the firm. He launched his own firm in 1903 and by 1910 had built a substantial and secure fortune.

Baruch married Annie Griffin of New York City in 1897. Three children were born to them. Baruch should have been a most contented man; his marriage was happy; his career prospered; he had time for sports and the theater. Yet there was another facet to Baruch that made him somewhat different from most Wall Street tycoons. His Jewish family placed more value on scholarship and service than on moneymaking and he was naturally drawn to a career of public service.

Woodrow Wilson first brought Baruch into Democratic politics during the presidential campaign of 1912, but it was not until 1916 that Baruch accepted a post in the intimate Wilson circle. Baruch was serving on the Advisory Commission of the Council of National Defense when war was declared in April 1917. In July he was named a member of the newly created War Industries Board. When the War Department fumbled its opportunity to control economic mobilization during the winter of 1917-1918, it became apparent to President Wilson that Baruch should become the chairman of the Board.

So many things were in flux in the War Department, in the operation of railroads, and in the control of fuel and food when Baruch became chairman that it is difficult to differentiate his work from that of others. Forces of reform converged from every direction. Although the United States did not complete its industrial organization and produce war material in quantity until the war's end, Baruch succeeded in coordinating American economic power for the first time in the nation's history. His work set precedents that were not overlooked by President Franklin Roosevelt when, in the 1930s, he organized the country to fight the Great Depression.

As the Versailles Treaty failed and the economic nationalism of the 1920s intensified, Baruch grew pessimistic about world affairs. He fought for industrial preparedness in a period when politically it was considered almost treasonous. He remained active in Democratic party politics, supporting William G. McAdoo for the presidency in 1924 and Al Smith in 1928. Malicious and false charges that he had profited personally from World War I hurt him deeply. He was also subject to anti-Semitic attacks. Perhaps the greatest blows were struck by the elder Henry Ford, who, in his newspaper, the Dearborn Independent, accused Baruch of being a part of a Jewish conspiracy to control the world's economy.

Baruch never recovered from Ford's insulting charges, and he refused public positions during World War II partly because of the terrible hurts inflicted by the auto magnate. Baruch may have served without portfolio during World War II, but he was not without influence. It was the "Baruch Report" that set the stage for the solution of the 1942 rubber crisis, so critical to Allied victory. It was Baruch who recommended James F. Byrnes of South Carolina for director of the Office of War Mobilization. Baruch, the "park bench statesman, " worked hard on plans for demobilization and post-war economic planning. He was on a mission to England as Roosevelt's personal emissary when he heard of the President's death.

At 75 Baruch undertook his last public mission, as American representative to the United Nations Atomic Energy Commission. The Baruch Plan for international control of atomic energy faltered on the matter of inspection and became quickly embroiled in the politics of the cold war. A few scholars have seen the proposal as an attempt by the United States to retain a monopoly of atomic weapons, but at the time even some Soviet statesmen saw it as a valid first position for important negotiations.

Baruch resigned from the Commission in January 1947. He remained interested in politics and international affairs but shunned the national spotlight. He could look back on a life of action and commitment. The "Wolf of Wall Street" had found a political mentor in Woodrow Wilson. He had surmounted prejudices surrounding his origins, his work on Wall Street, and his religion, to become an adviser of presidents and ultimately an American elder statesman. He died in New York City on June 20, 1965.

The best biography of Baruch is Margaret L. Coit, Mr. Baruch (1957). Baruch's My Own Story (1957) and The Public Years (1960) are also informative. For Baruch and World War I see Grosvenor B. Clarkson, Industrial America in the World War (1923). For his part in the World War II see Donald M. Nelson, Arsenal of Democracy: The Story of American War Production (1946). Inis L. Claude, Jr., Swords into Plowshares: The Problem and Progress of International Organization (1956; 3d ed. 1964), discusses Baruch's work with the United Nations Atomic Energy Commission.