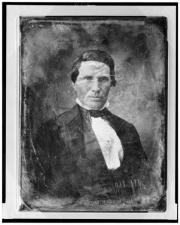 oxford
views updated
Doniphan, Alexander (1808–1887), lawyer, soldier, and statesman.Born in Kentucky, Doniphan became a prominent attorney there and after 1833 in Missouri. At the beginning of the Mexican‐American War, he organized the 1st Regiment of Missouri Volunteers and was elected its colonel.

During a campaign that began in late October 1846 at Santa Fe, New Mexico, and would end at Saltillo, Coahuila, in late April 1847, Colonel Doniphan led an American force that seized control of the capital of the Mexican state of Chihuahua. He also marched into Navajo Territory and obtained a treaty recognizing the U.S. government.

Doniphan then led his troops back to the Rio Grande, on to Socorro and toward El Paso. On Christmas Day, his troops, numbering 856, fought a Mexican force at Tamascalitos outside El Paso del Norte, killing 43 and wounding 150 Mexican soldiers. His force suffered only seven wounded. On 27 December they occupied the city.

On 8 February 1847, Doniphan marched south toward Chihuahua City. On 28 February, he routed the Mexican army in the Battle of Rio de Sacramento and occupied the state capital the next day. The Mexicans suffered 300 killed. After occupying the capital for nearly two months, Doniphan and his men departed for Saltillo on 28 April. They then returned to New Orleans by ship via Brazos Santiago. In one year, Doniphan and his men had covered 3,600 miles by land and 2,000 by water—one of the most successful military marches in U.S. history.
[See also: Kearny, Stephen Watts; Mexican‐American War.]