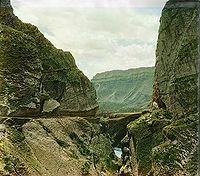 Ruslan Khasbulatov studied at Kazakh State University and Moscow State University (MGU), where he was active in the Komsomol and joined the Communist Party of the Soviet Union (CPSU) in 1966. He earned a doctorate in economics from MGU in 1970. Khasbulatov spent the 1970s and 1980s working at the Academy of Sciences's Institute of Scientific Information and the Scientific Research Institute for Questions of Secondary Schools. He transferred to the Plekhanov Institute for Economic Management in 1979, eventually becoming chair of the division of Economy of Foreign Countries.

In 1990 Khasbulatov was elected to the first RSFSR (Russian Soviet Federated Socialist Republic) Congress of People's Deputies. When the Congress elected Yeltsin as chair, he picked Khasbulatov as his first deputy (May 1990). Following Yeltsin's election to the newly created Russian presidency, Khasbulatov became speaker of parliament (October 1991).

Khasbulatov opposed the amount of power that devolved to Yeltsin after the collapse of the Soviet Union. He also opposed Yeltsin's economic policy of shock therapy and the privatization campaigns. As Yeltsin's team drafted a new Russian constitution, Khasbulatov spearheaded a parliamentary effort to reduce Yeltsin's authority and more equitably redistribute powers between the Russian executive and legislative branches.

The power struggle culminated in Yeltsin's dissolution of parliament in September 1993. Led by Khasbulatov and Russian Vice President Alexander Rutskoi, legislators barricaded themselves in the parliamentary building. Yeltsin responded by firing on the building the night of October 3–4, 1993. Khasbulatov was led from the building in handcuffs and sent to prison. In February 1994, the Russian State Duma amnestied Khasbulatov along with all the participants in the parliamentary rebellion.

An ethnic Chechen, Khasbulatov became involved in the domestic politics of the rebellious republic. He unsuccessfully ran for president in 1996 and has been involved in negotiations to end the second Chechen war. As of 2003, Khasbulatov teaches at the Plekhanov Institute in Moscow.

Dunlop, John B. (1993). The Rise of Russia and the Fall of the Soviet Empire. Princeton, NJ: Princeton University Press.

Russian Federation , Type of Government The government of Russia operates under a super-presidential system that grants broad powers to the elected head of state, the pre… Buryats , The Buryats, originally a nomadic herding people of Mongolian stock, live in the South-central region of Siberia, in the territory bordering Mongolia… Kaliningrad , At the 1945 Potsdam Conference, the Western allies acceded to Josef Stalin's demand that the northern third of East Prussia be awarded to the Soviet… Crimea , Russian hegemony was established over the Crimea region in 1783 when the Tsarist empire destroyed the Crimean Tatar state. By the second half of the… Chechnya , THE TSARIST AND SOVIET LEGACIES THE END OF THE SOVIET ERA INDEPENDENT CHECHNYA THE FIRST WAR THE SECOND WAR BIBLIOGRAPHY Chechnya is a small, mountai… Boris Nikolayevich Yeltsin , Yeltsin, Boris Nikolayevich YELTSIN, BORIS NIKOLAYEVICH (b. 1931), charismatic anticommunist reformer, first president of post-Soviet Russia. Democra…