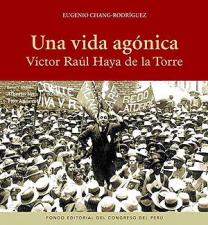 Victor Raúl Haya de la Torre (1895-1979) was the founder and leader of the American Popular Revolutionary Alliance (APRA), principal theorist of Aprismo, and three-time presidential candidate (in the 1930s and 1960s) of the Peruvian Aprista Party. He spent most of his adult life in jail, in exile, or in hiding from the police.

Victor Raúl Haya was born in Trujillo, Peru, on Feb. 22, 1895; his father was a newspaper publisher and his mother a descendant of a president of Peru. He studied at Trujillo National University and San Marcos University, but did not graduate. From the beginning, he took up popular causes and involved himself in radical movements. He said, "I have always preferred doing to discussing, " and he believed doing and organizing were inseparable. He became involved in agitation on student reform issues, but was jailed in 1923 and then deported over an incident involving freedom of religious conscience. While in Mexico in 1924, he founded APRA, which he first saw as a continent-wide anti-imperialist movement.

Operationally, Aprismo's three main themes are to champion the three underprivileged classes—workers, farmers and middle class; to re-focus government activities in the interests of the national economy, as opposed to foreign interests; and to develop the necessary moral force to support practical action. Specific programmatic ideas included reorganizing the state; extending voting rights; decentralizing police power; controlling foreign investment in the Peruvian economy; nationalizing certain industries; expropriating certain estates (with compensation) and converting them to production for domestic markets; creating collective farms; incorporating Indians into national life and preserving their culture; establishing the eight-hour day and paid annual vacations, equal pay for women, and maternity leave; and freedom for the armed forces and the police from political interference.

From 1923 to 1931, Haya de la Torre traveled widely in Mexico, France, England, the Soviet Union, and the United States, studying, writing, and spreading his ideas. While a student at San Marcos, Haya de la Torre had been inspired by the Mexican Revolution (1911) and the Russian Revolution (1917), but in 1924 he broke with orthodox Marxism and came up with his own theory for developing "Indo-America" (by which he meant all of Central and Latin America).

When the Peruvian dictatorship was overthrown in 1931, Haya de la Torre returned as the Aprista party's candidate for president. He was officially given 35 percent of the vote, but the party thought it a fraud and staged an unsuccessful uprising. The military awarded the presidency to Col. Sánchez Cerro, who quickly established a dictatorship and tried to destroy the Aprista movement. Haya de la Torre was jailed in May 1932 and kept in solitary confinement until August 1933, after Sánchez Cerro's was assassinated. In 1934 Haya de la Torre went underground for eleven years.

During this time, the Aprista party extended its power by organizing sugar estate unions, school teachers, and miners. In 1939 the party provided the votes that elected a liberal as president, but nine years later it was unable to bring Haya de la Torre to power through a strike and the Apristas were outlawed once again by a military-led government. In 1949, Haya de la Torre took asylum in the Colombian embassy in Lima. The Peruvian dictatorship refused to allow him to leave Peru. Twice the International Court of Justice at the Hague took up his case and, under heavy international pressure, the regime finally allowed him to leave the country in 1954.

Haya then lived in Latin America and Europe until 1956, when he was allowed to return to Peru. After that, he alternated living in Peru with traveling in all parts of the world. Haya led all other candidates for the presidency in the election of 1962, but the armed forces canceled the election. In 1963 Haya, again a candidate, was defeated, but the Apristas won a dominant position in the legislature. In 1968 it appeared as if Haya would be elected president for the 1969-1975 term, but the military reinstituted dictatorship. He spent most of his remaining years in Paris. A month before Haya de la Torre's death in 1979, APRA announced that once again, he was to be their presidential candidate.

No good biography of Haya has been published in English. Robert J. Alexander, Prophets of the Revolution: Profiles of Latin American Leaders (1962), has a chapter on Haya. Recommended for an understanding of the man and the Aprista movement are Harry Kantor, The Ideology and Program of the Peruvian Aprista Movement (1953); and Grant Hilliker, The Politics of Reform in Peru: The Aprista and Other Mass Parties of Latin America (1971). □