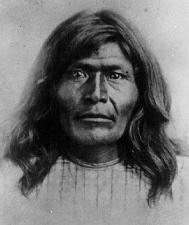 Victorio (c. 1820–1880) was an Apache warrior known as an intelligent and feared fighter. He proved his military cunning by leading small groups of warriors—often consisting of no more than 35 to 50 fighters—in triumphant resistance to American and Mexican troops. In October of 1880 he was eventually captured by Mexican soldiers at Tres Castillos in the state of Chihuahua in Mexico. Killing himself, rather than letting his enemies take him alive, Victorio left behind the legacy of his resistance to the forced movement of Native Americans onto reservations.

Victorio was born around 1820 in the Black Range of New Mexico. It was a rugged region of mountain and desert that might have seemed rather stark and barren to outsiders, but the Native American group that Victorio belonged to thrived upon the landscape. Victorio was a member of the Eastern Chiricahua Apaches, otherwise known as the Warm Springs or Mimbreno Apaches. The Apaches that Victorio belonged to were first united in 1837 by Mangas Coloradas near the Gila River in south-western New Mexico. Little is known about Victorio's early life, but it can be assumed that he spent some of his life learning to be a warrior, fighting against the encroaching white people and other enemy tribes who all fought to keep the best land and supplies. Young Native Americans, at the time, had to prove their worthiness to be called warriors by fighting against such people and demonstrating their military prowess in battle, something that Victorio must have done well.

In the 1850s Victorio engaged in raids in northern Mexico alongside the more famous Native Americans Nana and Geronimo. In 1862 he joined Chief Mangas Coloradas, serving under him in the successful war to expel the Santa Rita del Cobre copper miners from Apache land. It was after Mangas died that Victorio rose to become a tribal leader, as he was next in line to lead. Victorio was the last hereditary chief whose raiding bands roamed over the lands they inhabited without any obstacles to stand in their way. This territory included present-day southwest Texas, New Mexico, southern Arizona, and the northern Mexican states of Sonora and Chihuahua.

Victorio gathered together a band of about 300 Eastern Chiricahuas and Mescaleros Native Americans whom he took care of. He was thought, by the United States troops who fought against him, to be a man of sound judgment, tactical expert, and a great leader of men. His band of Native Americans settled near Fort Craig, New Mexico, in 1869, to await the completion of a new reservation near Ojo Caliente (Warm Springs), New Mexico that they had been promised by United States leaders. They were happy with their new home and did little raiding until April 20, 1877, when it was decided by the United States government that they wanted the land they had given the tribe, and that the Native Americans were to move to the San Carlos Reservation in Arizona instead. The move would crowd Victorio's band of Native Americans onto the San Carlos Reservation amidst their traditional enemies. They were given no choice, but had to leave while their crops were only half ripe. Victorio, on behalf of his people, protested the move loudly. Victorio had heard that the conditions at the San Carlos Reservation were horrible, and he had also heard of other Native Americans successfully raiding the nearby lands, rather than submitting to the move. Victorio considered putting together a band of warriors to begin raiding in Mexico, Texas, and New Mexico; however, he first attempted to reason with the men in charge of forcing his people to move.

When Victorio was told that Warm Springs would be taken away from his people and offered to white settlers, it has been passed down that Victorio heatedly pleaded for his fellow men, women, and children to be allowed to keep their land. He passionately argued that if they were left alone at their homes, there would be no trouble. When little heed was paid to his statement, Victorio was quoted as having added, "This is our home, our country. We were born here and we love it." The officers in charge of moving Victorio and his men paid no attention to Victorio's pleadings. So Victorio said that he could not and would not stop them from taking the women and children to the new settlement, but he would not go himself and he would not allow his warriors to go either.

To deal with the situation the officers threatened to charge Victorio with murder and horse-stealing unless he complied with their wishes. Victorio knew that the white officers could be merciless. Not too long before this Geronimo had been jailed and Mangas Coloradas had been killed for going against the white man's wishes. Victorio feared the same things would happen to him, so he allowed himself and his people to be moved to the San Carlos reservation. He remained there for a very short time, however, choosing instead to run away from the reservation, never to return. He told the white men who he had befriended that he was sorry, but from then on it would have to be war, there would and could be no other way. He put through his earlier plans of raiding rather than submitting to a degrading life on the reservation.

When Victorio left the San Carlos reservation, he took with him a group of approximately 40 warriors. Even though his band was small, Victorio managed to carry out attacks over an amazingly wide area of land, including New Mexico, Texas, and Mexico; he fought more battles over a wider area than any other Native Americans fighting at the time. He was a genius at planning and going through with an attack, and his warriors fought valiantly and loyally at his side. It has been told that there were almost 500 Americans and Mexicans who died during the attacks, which came to be known as Victorio's War.

Fought With Americans Near Rattlesnake Springs

In the summer of 1880 Victorio and his band stayed at many locations, always on the move. These locations included Quitman, Carrizo, and the Guadalupe mountains of far western Texas. Their tactics were those of guerilla warfare, and it made them cunning enemies. Always difficult to catch an enemy who has no base from which to work, the Americans and Mexicans knew that if they were going to catch Victorio and his band they were going to have to pay attention to every whisper of knowledge they received about the warriors' whereabouts. American officers heard just such a whisper in 1880; the rumblings were that Victorio and his band would be moving from the Rio Grande north to the Guadalupe mountains.

Proceeding without verifying the rumor of Victorio's location, they quickly moved their troops into position to intercept the group. Their hope was that they would be able to ensnare the band of Native Americans in the vicinity of a place called Rattlesnake Springs, which they assumed the Native Americans would have to stop at, as it was a sort of oasis in the relatively barren landscape. Their risk paid off, as they did indeed come upon Victorio moving north to the mountains. The two groups met and clashed in the Sierra Diablo Mountains and at Rattlesnake Springs. The battle went on for three hours, each side striking deeply at the other until Victorio and his warriors finally fled into the Carrizo Mountains in the west and on into Mexico. The American officers spent much of that summer and fall looking for Victorio, but were unable to track him and his men down. They eventually returned to their base at Fort Concho empty-handed.

Back at Fort Concho, the American officers enlisted the help of Texas Rangers to track the Apaches down. One such man sent to find Victorio was ranger James B. Gillett, who purportedly rode with a Lt. George W. Baylor, 12 other rangers, and almost 100 civilians into Mexico in September of 1880 looking for the band of Native Americans. According to Gillett, he and the men he rode with were close to tracking down Victorio and his band when they were suddenly forced out of Mexico by the Mexican military soldier Colonel Joaqu'n Terrazas, who himself was a famous Native American fighter and leader of the Chihuahua militia. Terrazas was also looking for Victorio and his men and did not want anyone else to find them. The Americans went home empty-handed again, cursing the Mexican's deportation of them.

Continuing on the trail that the Americans were following, Terrazas proved to be successful. In October of 1880 Terrazas and his men tracked the Apaches down to a range of mountains approximately 60 miles inside the Mexican border, called Tres Castillas. It was a location that Victorio and his warriors often stayed at when they were in Mexico looking for a place to hide out, and unfortunately Victorio heard nothing of the Mexican army's approach until it was too late to escape.

On October 15, 1880, Terrazas and Juan Mata Ortiz, the man who was his second in command, managed to encircle Victorio and his men. The Apaches fought bravely, but in the end Terrazas, Ortiz and their men slaughtered the band of Apaches, leaving only those few women and children who had been traveling with the band alive. Victorio himself, refusing to die an ignoble death, at the hands of his enemies, killed himself. The survivors were made prisoners and were taken to Chihuahua City where they were kept in custody for the next few years.

So ended the great warrior who had been forced off the land of his ancestors. Victorio died on October 15, 1880, in a battle against the Mexicans, but his memory remained vivid in the minds of people and especially his family. Although polygamy had been a status symbol in his tribe, he had only one wife, with whom he had had five children. Three of his sons died in battle before him.