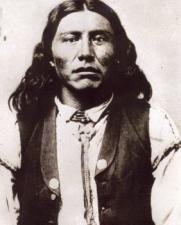 Some authorities cite Mangas Coloradas as the most significant Apache war chief of the nineteenth century, although some dispute whether he was formally recognized as their chief. Americans and Hispanics of the period described Mangas as an influential statesman, diplomat, and sage, as well as a ferocious, uncompromising, and brutal butcher who laid waste huge tracts of northern Mexico, all of Arizona, and much of New Mexico. His name was synonymous with terror. Despite his apparent penchant for violence, however, he was said to be a peace-loving man whose only interest was in preventing the Hispanics and Americans from overrunning his people's lands.

A member of the Mimbreno ("Willow") band of the eastern Chihenne ("Red Paint People") Apache, Mangas Coloradas was born between 1790 and 1795, probably somewhere in what is now southern New Mexico. His nomadic band inhabited the area of the Mimbres Mountains and along the Mimbres River. At that time this territory was part of the Janos district of New Spain. The early nineteenth century was characterized by a low level of hostility between the Spanish and Apache. This would change around 1831, however, and Mangas would figure prominently in the Apaches' attempts to drive the Spanish, and later the Mexicans and Americans, from ancestral Apache lands.

Physically Mangas was described as very muscular and unusually tall for an Apache: over six feet. His most prominent feature was his large head, described by John Cremony in Life among the Apaches as having "a broad, bold forehead, a large aquiline nose, a most capacious mouth, and broad, heavy chin. His eyes were rather small, but exceedingly brilliant and flashing when under any excitement—although his outside demeanor was as imperturbable as brass." One legend suggested he was at least half white, his father being an Apache warrior and his mother Mexican.

Origins Are Subject of Speculation

Mangas Colorado's name initially appeared in historical documents in 1842. He was cited as a Mogollon leader, with the Mogollons being another of the eastern Apache bands. It has been suggested that prior to 1842 he was known by some other name. He may have received his Spanish name meaning "red sleeves" or "roan shirt" either because his shirt had sleeves of red fabric, or because it was covered with his victims' blood. The latter may be applicable given Mangas' revenge for the murder in 1837 of Juan Jose Compa, his predecessor.

Prior to this event he may have been known as Fuerte, who was the dominant Chihenne leader from 1815 through the 1830s. "Fuerte," Spanish for "strong," could well have been used to describe a man like Mangas. Mangas and Fuerte seemed to be about the same age, and both were called by the title "general." Fuerte, however, is on record of officially receiving this title, while Mangas is not. Besides a similarity in their physical features, they seemed to share the practice of distancing themselves from Mexicans, taking what the administrators could be made to give them but keeping personal contact to a minimum. Fuerte lived near the Mimbres River and Santa Rita del Cobre, where Mangas had his stronghold. He disappeared around 1840. It is also possible that up until 1840 Mangas was simply overshadowed by Fuerte, and assumed power as his position weakened. Mangas reportedly became chief of the Mimbrenos about 1837.

The Apache language was a difficult one to learn and speak. This was possibly one reason why Spanish names were often assigned to people and places. Thus virtually none of the original Apache names are known. The Spanish intended to create out of the nomadic Apache a population of self-sufficient farmers. Some of the regulations they imposed on the Apache to force them into farming were requiring passports for those who wished to travel in the territory and forbidding traditional hunting and gathering without a permit. They rewarded loyal Apache allies with gifts of horses or in some cases the return of incarcerated relatives. When the Mexicans gained independence from Spain in 1821, the region was opened to commerce from the outside, and raiding became more profitable than farming. Many Apache left their farms and assumed very successful and lucrative roles of middlemen; raiding and trading, especially in horses, mules, and captives. One of these captives became Mangas Colorado's principal wife.

While on a raid in Sonora, Mangas abducted an attractive, intelligent Mexican girl. She was given the name Tu-esseh and they had three daughters. When Dos-teh-seh, the eldest, came of age, Mangas presented her to Cochise, leader of the Chiricahua ("Mountain of the Wild Turkeys") Apache, for his wife. He gave his second daughter to Katuhala, leader of the White Mountain Apache, and the third to Cosito, chief of the Coyotero Apache. While it is well-documented that Dos-teh-seh married Cochise, the identity of the husbands of the other two daughters are disputed. Some claim Mangas gave one to the chief of the Navajo and another to the head chief of the Mescalero Apache. In any case, Mangas' intent with all the marital arrangements was to forge alliances and create stronger relationships within the tribes, including the Navajo, who were enemies of the Mexicans and the Spanish before them.

Mangas was described as a statesman, actively shaping and conducting Apache policy with respect to the whites. These marriages seemed to show that he knew the threat from the Mexicans and Americans was greater than any inter-tribal or inter-band dispute, and the only hope of overcoming that threat was to unify the bands and tribes against it. If indeed this was his strategy, he was for all practical purposes the only Indian since Tecumseh to realize the value of unification. Despite this, only his alliance with Cochise was completely successful. In addition to his daughters, he had at least three sons: Seth-mooda, Casco, and Mangas. His brothers of record were Jose Mangas, Phalis Palacio, and Chaha. He may have had additional brothers or sisters.

The Spanish government and the Mexican government which succeeded it had customarily provided rations to the Apache. When the Mexican government discontinued this practice in 1831, strained relations between the Mexicans and Apaches caused the Indians to intensify their raids on towns and ranches. The state of Chihuahua declared general war on Apaches on October 16, 1831. Mangas' theater of operations in the early 1840s encompassed Chihuahua state and the Mogollon Mountains. He expanded this to include Sonora state by the 1850s. In 1856 Mexican officials offered a bounty for Mangas Colorado's head.

Raiding allowed the Apache to maintain some semblance of their traditional livelihood; it suited their nomadic nature. But atrocities against their victims were generally not part of their raids. In the case of Mangas, however, this changed radically as a result of two notable incidents which precipitated his hatred of all whites.

The first of these concerned John Johnson, an American who made his living hunting Apaches. He traded the scalps of his victims to the Mexican government in exchange for a bounty. In April of 1837, Johnson, after befriending the Mimbreno head chief Juan Jose Compa, ambushed and massacred Juan Jose and about 20 members of his band near Santa Rita in the Sierra de las Animas (modern Hidalgo County, New Mexico). Mangas was apparently related to Juan Jose, and he retaliated by killing a group of 22 American miners as well as whatever other Americans he could find in the area. In an interesting turnaround, when he met General Stephen Kearney in 1846, he pledged his friendship to the Americans and alliance if Kearney wanted to invade Mexico. Kearney refused.

The second incident, in April 1851, also occurred near Santa Rita. An influx of gold miners angered the Apaches because it drove off game and mocked their spiritual traditions. Mangas offered to lead the miners to an area richer in gold than the mines at Santa Rita, where they could pick large nuggets off the ground. Suspecting he was trying to lure them away individually and kill them, the miners bound him to a tree and whipped him to near unconsciousness. The beating was so humiliating, Mangas hid in the mountains for two weeks until his back healed.

As a result of these experiences, Mangas' assaults against the whites became increasingly brutal and murderous. His infamous trademark was leaving the hats on the scalped heads of his victims. Since whites wore hats and Apaches did not, Mangas ordered his men to shoot anyone wearing a hat. The hat would remain even when only bones were left, testifying to Mangas' killing of another enemy. In yet another turnaround, Mangas and a group of chiefs signed a treaty with the U.S. government in 1852 at Acoma Pueblo, but Congress refused to ratify it. Atrocities thus continued, and Colonel E. V. Sumner's official report for 1852 strongly recommended giving New Mexico back to the Indians and Mexicans.

Tortured and Murdered at Ft. McLean

Mangas and Cochise joined forces in 1861, when several of Cochise's relatives were executed by Lieutenant George M. Bascom's Seventh Infantry. Mangas and Cochise intended to drive all Americans from their lands. In 1862 Mangas was wounded in the chest by John Teal in the battle of Apache Pass in Arizona. He was taken to Janos, Chihuahua, where his band coerced a doctor to treat him. He made a full recovery.

In January 1863, he was captured by Captain Edmond Shirland's First California Volunteer Cavalry. Lured into Shirland's camp by a flag of truce, Mangas trusted Shirland and rode in alone. He was taken to Fort McLean in Arizona, where he was killed by guards when he protested against their torturing him with hot bayonets. An inaccurate report of his capture and death stated he was killed while attempting escape. Convinced the Americans could not be trusted, the Apaches began another campaign to eliminate the whites.

Mangas' murder in itself had a profound effect on the Apache, but the mutilation of his body by the soldiers (he was scalped and buried in a ditch) further excited their rage. Capt D. B. Sturgeon, fort surgeon, exhumed the body, had the head cut off, the meat boiled from the bones, and the skull sent to a phrenologist, Professor O. S. Fowler. Fowler pronounced it of greater capacity than Daniel Webster's.

Despite his years of savage tactics, Mangas' principal aim seemed to be obtaining a lasting peace for his people, a goal for which he continually placed himself in harm's way. A 1970s survey of Chiricahua Apaches living in New Mexico and Oklahoma revealed that while many remembered the murder of Mangas Coloradas, comparatively few recalled Pearl Harbor—despite the fact that radical changes had taken place in Chiricahua culture in the century since Mangas' death occurred.

Roberts, David, Once They Moved Like the Wind, New York, Simon and Schuster, 1993.