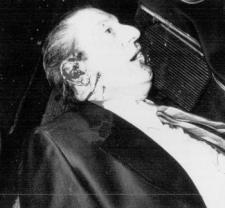 At a time in U.S. history when gangsters were famous personalities, Louis ("Lepke") Buchalter (1897-1944) was one of the most famous of all. As head of Murder, Inc. he was also one of the most feared.

Louis ("Lepke") Buchalter was born in New York City in 1897. The son of a Jewish hardware store owner on Manhattan's Lower East Side, his childhood was filled with street fighting and minor crimes. His only known occupation was as a criminal. Lepke (a childhood nickname by which he was universally known) graduated from simple pushcart robberies at the age of sixteen to organizing protection rackets the following year. Too short at five feet seven and one-half inches to intimidate those he sought to "protect," Lepke joined forces with Jacob ("Gurrah") Shapiro, a huge man whom he met when they both attempted to rob the same pushcart.

Being an intelligent young man, Lepke began to consider the potential of labor unions. He realized that if all the workers in an industry were members of a union, and if he could then control that union, he would be in control of the industry. By exerting pressure on both labor and management, he soon dominated entire industries by forcing employers to pay his organization in order to keep union workers in line. At the height of his power, Lepke controlled the entire garment trade and the bakery delivery truck union in New York City. He charged the bakers one cent per loaf for transporting their bread to market in a timely fashion.

Organized Crime was a Business

From 1927 until 1936, Lepke and Shapiro had exported tens of millions of dollars from industries in New York City and across the United States. He always managed to cover his illegal activities. Although the authorities knew what he was doing, they didn't have enough evidence to prosecute him. Or, in some cases, they were paid off and merely looked the other way. The money rolled in. Lepke became one of the wealthiest of all the gangsters.

During the 1930's, Lepke was one of the most powerful figures in organized crime. For six years, he led Murder, Inc., the national crime syndicate's enforcement arm. If a crime boss wanted a murder committed, he would go through Lepke to hire one of the killers. As many as 100 murders have been attributed to Lepke himself, since he sometimes enjoyed carrying out a contract on his own just to stay in practice. Those under his control probably killed hundreds more. He was considered by most law enforcement officials to be the number two mobster, behind Charles "Lucky" Luciano, the top crime syndicate leader. This was true even though Lepke was less well known. He tended to avoid the headlines and, unlike his colleagues, shunned publicity. Lepke didn't look the part of a hardened murderer and mobster. He generally wore a well-tailored suit and had the appearance of a businessman of some means. He had a wife and a son, and on the street or at a social occasion he didn't seem frightening at all.

Lepke was also a powerful man in politics. He once offered a deal to United States Attorney for New York, Thomas Dewey. The deal might have assured Dewey of gaining the highest elected position in the United States, the presidency. Lepke offered to provide information on organized crime connections of top figures within President Franklin D. Roosevelt's cabinet. This included Sidney Hillman, president of the Amalgamated Clothing Workers and a top advisor to Roosevelt. Since Lepke had been involved in racketeering throughout the country, and was the "boss" of the garment district in New York, he was in a position to know of Hillman's connections.

Dewey turned him down. Although he was later nominated to run against Roosevelt, Dewey lost by a large margin. Political experts still speculate about what might have happened if Dewey had accepted Lepke's offer. That information would certainly have hurt Roosevelt in the election and might have changed the course of U.S. history.

The capture and conviction of Lepke was almost like a motion picture script. He had gone into hiding in 1937, due to the intense pressure from lawmen like Tom Dewey. He was wanted for murder by the city of New York and a $25,000 reward was offered. The federal government, who matched the reward with another $25,000, wanted him for narcotics trafficking. This was a tremendous amount of money in the 1930's, but not a single person came forward to claim it. Most were simply frightened at what the still-powerful Lepke would have done to them. He still had his gang of thugs who would do anything to ensure his continued safety.

Finally, with persuasion from Lucky Luciano and thinking he had made a "deal" to serve only a short prison sentence, Lepke made an agreement with the noted radio and newspaper columnist, Walter Winchell, to turn himself in. J. Edgar Hoover, of the Federal Bureau of Investigation, approved the surrender arrangement. On August 24, 1939, Lepke reported to Winchell and Winchell handed him over to Hoover.

Unfortunately for Lepke, there was no deal. He had made a fatal mistake in coming out of hiding, or in believing what his friend Luciano and the authorities had promised. Nor did the syndicate come forward to help him, by pressuring those they were paying off to get him released. Gangland had turned against him. Lepke was promptly turned over to the Brooklyn District Attorney's office, and with the help of Tom Dewey, the United States Attorney of New York, he was vigorously prosecuted.

Lepke was executed for the murder of Joseph Rosen, a candy store clerk. He could have saved his own life if he agreed to turn informant. Law enforcement officials, and especially FBI Director, Herbert Hoover, knew that Lepke could give them reams of information on other gangsters of the day. Despite pleas from his wife to save his life, he refused. Speaking of United States Attorney, James B. McNally, who had the power to stop the execution, Lepke's wife pleaded, "He'll listen to you, Lou. God knows you can tell him enough to save you." Even Lepke's 22-year-old son, Harold, begged his father to turn state's evidence.

Lepke refused. He knew that his time was limited whatever he decided to do and that, even if he gave in, they would execute him eventually. "I'll have six months or so, and that's all," he said. The six months, he knew, would be served in prison. Lepke said, "I'd rather go tonight." Witnesses present in the death house at Sing Sing Prison in Ossining, New York reported that he died with dignity in the electric chair on March 5, 1944.

The categories of organized crime at that time were listed by the Department of Police Studies of Eastern Kentucky University, and Lepke had a hand in each. Organized crime, said the University's Gary W. Potter, included the provision of illicit goods and services, conspiracy, the penetration of legitimate businesses, extortion, and corruption. This was the life of Louis "Lepke" Buchalter.

Criminology , criminology, the study of crime, society's response to it, and its prevention, including examination of the environmental, hereditary, or psychologic… Crime , Crime Crime is often defined as "conduct in violation of the criminal laws of a state, of the federal government, or of a local jurisdiction, for whi… Robert Ferdinand Wagner , Wagner, Robert Ferdinand (b. 20 April 1910 in New York City; d. 12 February 1991 in New York City), lawyer, diplomat, and liberal Democratic politici… Organized Crime , Criminal activity carried out by an organized enterprise. A federal jury in July 2004 convicted Joseph C. Massino of 11 racketeering charges that inv… Lucky Luciano , Although he was once called "one of the 20 most influential builders and titans of the 20th century,"Charles "Lucky" Luciano (1897-1962) was a mobste… Unemployment , Because criminal sources of income, such as theft and fraud, are alternatives to legitimate earnings, they tend to be associated with unemployment. T…