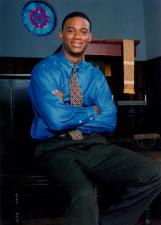 Born in St. Louis, Missouri, Guy Torry has become famous not only as a stand-up comedian, but also as an actor playing parts in movies such as American History X and Pearl Harbor. But with all the success Torry has seen since his entry into the entertainment world, he never planned on becoming an actor. Attending first the Visual and Performing Arts High School and then Southeast Missouri State University, Torry majored in Marketing. He planned on staying in Missouri and settling down to work there, but before doing that Torry decided to travel and eventually move west to see another part of the world before he got so embroiled in everyday life that he didn’t have the time.

When he moved to Los Angeles, Torry followed in his older brother’s footsteps, fellow actor Joe Torry, and tried his hand at entertaining. He landed a job on the television show Martin where he so impressed the show’s executives that he eventually ended up writing a few episodes for the series. He next appeared in roles on NYPD Blue, The X-Files, and Sparte. From there he went on to became part of the stand-up comedy team in Russell Simmons’s Def Comedi; Jam, on HBO, even touring with the group when they performed across the country. Later he was brought in to write for three seasons of the show. Torry has also written for television shows like Minor Adjustments and Moesha.

In 1994, after the Los Angeles riots, according to the Break TV website, Torry “created a weekly showcase for upcoming comedians known as Phat Comedy Tuesdays at L.A.’s Comedy Store.” The show became so popular that not long after the show commenced famous comedians were continually contacting Torry to ask to be part of the show. Torry spent a lot of time getting the Phat Comedy Tuesdays up and running, finally putting his Marketing degree to good use. About all the work he put into the comedy show Torry told the St. Louis Post-Dispatch, “I do it because I want it to be done right. I want to give an opportunity for comics to show their talent. It’s a blessing for me to be here and I want to help others.”

Torry returned to acting in 1996, appearing in such films as Don’t Be a Menace to South Central While Drinking Your Juice in the Hood and Sunset Park. He then won roles in Back in Business, (1997), One Eight Seven (1997), and 1998’s Ride. He caught Hollywood’s eye, however, with his role of the gentle laundryman Lamont in American History X, starring opposite Edward Norton.

In this 1998 film Torry played an inmate in a jail who becomes friends with a neo-Nazi skinhead, played by Norton, and helps him change his racist views. With real-life skinheads on the set, however, Torry found his working environment rather tense. “Some of those skinheads couldn’t wait to say the N-word,” Torry told E Online. “Even before they called action, they were saying Nnnn. I said, ‘Quit saying it now.’ And they said, ‘We’re just warming up.’” But the tension didn’t affect Torry’s performance. According to a biography on the William Morris Agency website, “Torry received rave reviews for his work in the film, being singled out by publications such as Daily Variety, Entertainment Weekly, and New York Magazine, who referred to him as ‘marvelous,’ ‘scene-stealing,’ and ‘superb.’”

In 1997 he was seen in the half-hour comedy show Good News, a show centering on a gospel church. Here he played Little T, a choir member and church porter. In 1998 Torry was the host of the successful comedy tour The Kings of Comedy. The troupe was seen in 52 cities and featured comedians like Steve Harvey, Bernie Mac, and Cedric the Entertainer. The Kings of Comedy was so popular that it actually sold out at the Radio City Music Hall in New York City. From there he was also seen on the television action drama series The Strip, which was produced by Joel Silver, the same man who produced Die Hard and Lethal Weapon. He played opposite Sean Patrick Flannery as a policeman. He also had a part in the television movie Introducing Dorothy Dandridge, in 1999.

Also in 1999 Torry appeared in two movies: Life, alongside Eddie Murphy and Martin Lawrence, and Trippin ’, a comedy about a high school senior who is constantly getting swept up in amusing fantasies. He was next seen in the NBC mini-series The ’70s. His co-stars included Brad Rowe, Vinessa Shaw, and Amy Smart; the four played friends who attended Kent State University together and spend the next ten years exploring the world and discovering their places in it. Variety said of the mini-series, “[T]hese are four realistic lives played out by adept actors… each actor is supremely suited to play each role.”

In 2001 Torry was seen in the movie The Animal, produced by Adam Sandier. He played alongside Rob Schneider as a man who complains that, he thinks, he gets preferential treatment because he’s black. “It was fun to learn from cats like Rob and Adam,” Torry told E Online. “The biggest thing I learned,” Torry continued,” is to trust in smart writing. If it’s there on the page, just go with it. A lot of times as comedians and actors, we try to bring in our own flavor—which is cool—but you got to learn to mix it with what’s already on the page.” E Online called Torry’s performance charming and said of him, “[I]f you haven’t heard of this Guy yet, you probably will soon.”

Also in 2001 Torry portrayed a Navy pilot alongside Cuba Gooding, Jr. in the movie Pearl Harbor. He got a little more out of this role than he expected, he told E Online, “I was supposed to jump out of the way as this missile comes through the ship, but it brought the whole set with it. I got out of the way just in the nick of time. I knew something was wrong, so the expression they got on my face was real.” Also in 2001, Torry appeared alongside Michael Douglas in suspense thriller Don’t Say a Word. He also supplied the voice for Will in Nickelodeon’s animated series As Told By Ginger, and Hugo in HBO’s animated The Steadfast Tin Soldier. Torry has also devoted much time building his own production company, Phat Lyke Dat Productions.

But even with his busy schedule Torry has still found time to perform at comedy clubs around the country, including The Comedy Store, The Improv, The Comedy Act Theater, The Fun House, The Punchline, The Laugh Factory, and others. A multi-talented performer, the entertainment world can definitely expect great things of Torry in the future.

Also appeared as Omar, Stuck on You.

Voice of Hugo, The Steadfast Tin Soldier: An Animated Special from the " Happily Ever After: Fairy Tales for Every Child " Series (animated), HBO, 2000.

John Witherspoon , Witherspoon, John 1942– Actor Well known to movie audiences for his appearances in the series of Friday movies starring rapper Ice Cube, character ac… Sinbad (actor) , Sinbad 1957(?)— Comedian, actor Known for his “clean comedy,” stand-up comic Sinbad pulls off a rare feat of delivering stage monologues that are fun… Chris Tucker , Tucker, Chris 1972— Comedian, actor Chris Tucker launched himself from stand-up comic to top-billed actor in short order. From his introduction to te… Richard Pryor , Richard Pryor 1940– Comedian, actor, writer At a Glance… A Tragic Background Early Career Moves Fame Brought Its Own Troubles Lonely at the Top A Sec… Sid Caesar , Caesar, Sid CAESAR, SID (1922– ), U.S. stage and television comedian. Born in New York, Caesar was the son of a Yonkers restaurant owner. In his form… Mike Epps , 1970— Comedian, actor Among comedians there once were Bill Cosby, Richard Pryor, and a bunch of struggling unknowns. Everything changed in the 1990s…