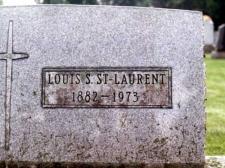 Louis Stephen St. Laurent (born 1882) was a Canadian statesman. He was prime minister and leader of the Liberal party of Canada, and during his efficient government Canada experienced an economic boom.

Louis St. Laurent was born in Compton, Quebec, on Feb. 1, 1882, of French-and Irish-Canadian parents. Completely bilingual, St. Laurent was educated at Laval University, where he did brilliantly in legal studies. Until 1941 he was content to be a lawyer, building a large practice and earning a reputation for integrity and honesty.

In 1941, however, World War II was under way, and Ernest Lapointe, the minister of justice and French Canada's spokesman in Ottawa, had just died. Prime Minister Mackenzie King selected St. Laurent to be Lapointe's successor, and after giving serious consideration to the request, St. Laurent decided to accept for war service only.

The relations between French Canadians and English Canadians had always been delicate, but in wartime they were more so. St. Laurent played a major role in reconciling Quebec to conscription, and he quickly established himself as the Prime Minister's right-hand man. With the end of the war, he was persuaded to remain in the Cabinet as secretary of state for external affairs, and in this post he became one of the architects of the North Atlantic Treaty.

When Mackenzie King retired in 1948, St. Laurent was selected as his successor at a leadership convention, and in the next year he led the Liberals to a sweeping victory in a general election. St. Laurent's administration was fortunate to be in office in boom times, and with C. D. Howe, his English-Canadian lieutenant, St. Laurent opened the doors to foreign investment. The results in the short term were astonishing: Canada's gross national product climbed; population increased; the standard of living rose; and resources development proceeded apace. In 1953 the government was again victorious in a general election.

Although the boom continued, charges of arrogance and contempt for Parliament soon were leveled against the St. Laurent government, particularly after the extraordinary measures employed in the House of Commons during the great "pipeline debate" of 1956. St. Laurent's angry attacks on the policies of Britain and France during the Suez crisis of 1956 did little to improve matters, and in the general election of 1957 the government was defeated. St. Laurent continued as leader of the Liberal party until January 1958, after which he entered retirement. St. Laurent was a manager rather than a leader, and although he and his government were undoubtedly efficient, there were few tears shed over the end of his regime.

There are few serious studies of St. Laurent or his administration. The only biography, Dale C. Thomson, Louis St. Laurent, Canadian (1967), is uncritical. William Kilbourn, Pipeline: Transcanada and the Great Debate (1970), sheds interesting light on the pipeline debate of 1956. □

Lester Bowles Pearson , Lester Bowles Pearson (1897-1972) was a distinguished Canadian diplomat and recipient of the Nobel Peace Prize. Later he became leader of the Liberal… Stephen Harper , Stephen Harper (born 1959), an often-underestimated Canadian politician, became his country's first conservative prime minister in 13 years when he l… Sir Charles Tupper , Sir Charles Tupper (1821-1915) was one of the Canadian fathers of confederation. He was a political leader in Nova Scotia and then Canadian Cabinet m… Vincent Massey , Massey, Vincent Vincent Massey (1887–1967) already had a long record of service to his home country of Canada when he was appointed the country's fir… Sir Wilfrid Laurier , Sir Wilfrid Laurier Sir Wilfrid Laurier Sir Wilfrid Laurier (1841-1919) was a Canadian political leader. Head of the Liberal party and prime minister… Patristic Literature , patristic literature, Christian writings of the first few centuries. They are chiefly in Greek and Latin; there is analogous writing in Syriac and in…