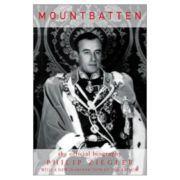 Louis Mountbatten (1900-1979) was one of the last of Britain's great war heroes. After his assassination by the IRA in 1979, the world joined Britain and India in mourning the loss of one of the most celebrated military men of the twentieth century.

Agreat-grandson of Queen Victoria was born June 25, 1900, on the grounds at Windsor Castle, and one month later was christened Louis Francis Albert Victor Nicholas. He was Prince Louis of Battenberg, born to Prince Louis and Princess Victoria (granddaughter of Queen Victoria), and his family had a rich and proud history of military service. Louis of Battenberg not only lived up to his family expectations, he surpassed them.

Two popular anecdotes from his early years followed Battenberg the rest of his life. The first was how as an infant he knocked the spectacles off his great-grandmother, Queen Victoria just moments before his christening. The second was how he received his nickname, "Dickie." From early on his family referred to him as "Nicky, " but a visit from Czar Nicholas of Russia prompted a change to Dickie, and the name stayed with him for life.

Early in His Career

At this time, Battenberg was making friends with Winston Churchill, his cousin "David, " (the future King Edward VIII) and most of the women he met. Soon he had the reputation of a playboy. Early on, it wasn't evident that Battenberg would be a success. His academic performance was only marginal, and he hadn't made a name for himself anywhere else. A shake-up in his family in regards to their heritage (and name) sobered his outlook.

During World War I, everything German and German-related was vilified in England. King George V, the grandson of the half-German Queen Victoria and the German Prince Albert, feared the wave of anti-German hysteria could reach the British Royal Family. Because of his German lineage, the senior Prince Louis of Battenberg was stripped of his title and position in the navy, and as a result, the title of "prince" was lost for the younger Louis as well. His father became the first Marquess of Milford Haven, and the family anglicized their name to Mountbatten. With newfound determination, Mountbatten gradually climbed the ranks through the navy.

In the summer of 1922 Mountbatten married Edwina Cynthia Annette Ashley. She was the heir to a sizable fortune, providing the couple with a comfortable lifestyle for the rest of their lives. Two years later, they had a daughter, Patricia. Another daughter, Pamela, was born seven years later. Anne Edwards, a biographer of Queen Elizabeth II, noted in her book The Royal Sisters that Mountbatten was "fond of children … a devoted father … and a concerned uncle to his sister's … son, Philip." (Philip, who later married the future Queen Elizabeth II, and his family were members of the exiled royal family of Greece.)

His Contributions to the Royal Navy

Mountbatten was successful in his professional life as well as his personal life. He created a device that bore his name and became standard equipment for all ships in the Royal Navy. The device enabled ships to keep an assured, clear distance from one another while steaming in line. He also pushed for arming British ships with machine guns. These guns provided excellent defense aerial attacks during World War II.

In 1939 he was promoted to Captain. Two years later Prime Minister Winston Churchill appointed Mountbatten Chief of Combined Operations with rank of Acting Vice-Admiral. He was in charge of planning the European Invasion. He also directed the invasion of Madagascar and commando raids on Norway and France. These raids became known as "butcher and bolt" raids and often left more casualties than success.

In 1943 Churchill and Roosevelt named Mountbatten the Supreme Allied Commander for Southeast Asia. He served in that capacity until 1946 and was responsible for the recapture of Burma from Japan. In 1945 he accepted the Japanese surrender at Singapore.

Throughout the war Mountbatten's wife worked near her husband, working for the welfare of the wounded, and after the war, she aided many prisoners of war. Together the press referred to Mountbatten and his wife as "The Fabulous Mountbattens, " and their popularity with servicemen and crew.

After the war, Mountbatten served as the last viceroy (governor of a country who rules as the representative of his king) of India from March through August of 1947. He oversaw the creation of India and Pakistan through negotiations with the Hindus and the Moslems. Although Britain was weakened from the war and could no longer hold onto India, many of the upperclass in England viewed Mountbatten as a traitor to his class and country for being instrumental in the dissolution of the British Empire.

During this time the title Lord Mountbatten of Burma was created; he also served as Governor-General of India for a year, from 1947-1948. He also, according to Edwards, attended "the wedding that had been his lifelong dream-his nephew Philip [married] the future Queen of England" in November, 1947. Edwards noted that it really wasn't a secret that "from early in his youth, Philip had been a pawn in his uncle's ambitions … and was being groomed for the future role of Prince Consort."

The next year Mountbatten was promoted to Vice-Admiral. The rank of Fourth Sea Lord followed in 1950. He also served as Chief of the North Atlantic Treaty Organization (NATO) forces in the Mediterranean. Promotions continued-to Admiral the following year-and he attained the height of his professional career on April 18, 1955, when he was named First Sea Lord. This was the exact title stripped from his father all those years ago. The following year he was promoted Admiral of the Fleet. In these capacities Mountbatten oversaw numerous changes in Britain's defense system, such as guided missile ships and nuclear submarines.

It was also around this time that he became the confidant of his great-nephew, Prince Charles, the future king of England. According to the A & E Biography profile Prince Charles: Born to be King, Charles turned to Mountbatten for "support and guidance, " and viewed him as a "honorary grandfather."

Throughout his career, Mountbatten was known to be ruthless. He used his status to get his way, and often publically and privately criticized his peers. He also enjoyed both recognition for his successes and ceremonies where he could dress in his military uniform, adorned in medals and honors. In his obituary, The New York Times attributed the following quote to Mountbatten, "I am the most conceited man I have ever known." This attitude often alienated Mountbatten from his peers and simultaneously made him popular with commoners.

The End of His Life

His wife died in 1960, and Mountbatten retired five years later, though he remained a confidant to Queen Elizabeth II and his nephew, Prince Philip. He also continued to advise Prince Charles, according to the A & E profile, encouraging Charles to join the Royal Navy and "to play the field and have lots of affairs before he settled down." Although he was often considered irritating and annoying, Mountbatten was respected by both royalty and ordinary people, and was almost universally loved.

In 1979, a bomb demolished his fishing boat in waters off the northwest coast of Ireland near his family summer home, on August 27. Mountbatten, his 14-year-old grandson, and a friend of his grandson were all killed instantly. He became the IRA's most famous victim. A member of the Provisional wing of the Irish Republican Army (IRA) was later convicted of his murder.

Mountbatten's funeral at Westminster Abbey was considered the most-outstanding tribute to any military personnel since the Duke of Wellington was buried in 1852. His great-nephew, Prince Charles, was one of many who paid tribute to him at the funeral. He was buried in an abbey at Romsey near his Hampshire home. After 50 years of service to the Royal Navy, he was buried facing the sea.

oxford
views updated
Mountbatten, Louis Francis Albert Victor Nicholas, 1st Earl Mountbatten of Burma (1900–79). Naval commander and statesman. Mountbatten was born to a family closely related to the house of Windsor. After a spectacular career in the navy and in London high society, in April 1942 he was made commander of combined operations against occupied Europe. In August 1943 he became supreme allied commander for south-east Asia and led the campaign to recover Burma and Malaya from the Japanese. After the war, he showed himself particularly sympathetic to the causes of indigenous nationalism. In December 1946 he was appointed the last viceroy of India to oversee the transfer of power, which took place on 15 August 1947. In 1949 he resumed his naval career and was at the Admiralty, as 1st sea lord, at the time of Suez, over which he clashed sharply with the Eden government. He was chief of the defence staff from 1959 to 1965. He was murdered in Ireland by the IRA.