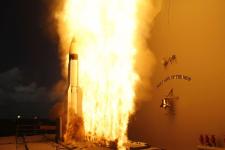 oxford
views updated
guided missile Missile controlled throughout its flight by exterior or interior control systems. There are four types: surface-to-surface, surface-to-air, air-to-air, air-to-surface. The first guided missiles were the V1 launched (1944) by Germany during World War II. Post-war developments included the huge intercontinental ballistic missiles (ICBMs), with nuclear warheads and ranges of 10,000km (6000mi). Submarine systems included Polaris and Trident. The multiple independently targeted re-entry vehicles (MIRVs) – ICBMs with many sub-missiles – were developed in the late 1960s. The cruise missile has wings like an airplane, making it capable of flying at low altitudes.

William Branch Giles , Navy Combat Branches Navy Combat Branches Surface ForcesSubmarine ForcesNaval Air Forces Navy Combat Branches: Surface Forces Until the twentieth cen… Torpedo (weapon) , Torpedoes. The torpedo, a self‐propelled and self‐guided underwater explosive device, was invented in 1866 by Robert Whitehead, a British engineer wo… Surface Tension , Surface tension, in physics, is an effect within a liquid’s surface layer, which causes the layer to possess characteristics similar to elastic. For… Aegis , AEGIS. The AEGIS Combat System is a sophisticated shipborne target detection and tracking system developed by the U.S. Navy and currently installed i… Potentiometric Surface , Skip to main content potentiometric surface Boundary Layer , boundary layer boundary layer 1. At the interface between a solid surface and a fluid, a thin fluid layer that is static because of friction between…