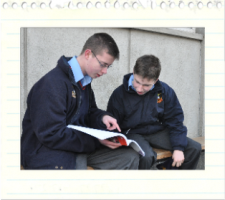 Scott Milross Buchanan shaped the Great Books program in American higher education as it developed at the People's Institute (New York City), the University of Chicago, and St. John's College (Annapolis, Maryland). A philosopher, critic, author, and educator, Buchanan promoted and experimented with the pursuit of the liberal arts through discussion of classic texts in philosophy, literature, mathematics, physics, astronomy, political science, history, economics, and languages.

Buchanan was born in Sprague, Washington, to William Duncan Buchanan, a medical doctor, and Lillian Bagg Buchanan. Their only child, he moved with his family to Jeffersonville, Vermont, where he spent his boyhood years. His father died in 1902.

Soon after he entered Amherst College in 1912, Buchanan became a devoted follower of its president, Alexander Meiklejohn, an educator nationally noted for his defense of liberal education and his masterful use of Socratic seminar methods. Buchanan's custom-tailored undergraduate curriculum amounted to a triple major in Greek, French, and mathematics. After graduating with a B.A. in 1916, he spent two years as an administrator and an instructor at Amherst before attending Oxford as a Rhodes scholar from 1919 to 1921. There, he met Stringfellow Barr, a Rhodes scholar from Virginia who would become his lifelong friend and his partner in innovative academic endeavors.

Upon returning to the United States, Buchanan married Miriam Damon Thomas, a teacher and social worker. The couple had one child, Douglas Buchanan. Determined to seek further academic study, particularly in philosophy, Buchanan entered Harvard University, where the English mathematician and philosopher Alfred North Whitehead offered him intellectual encouragement. He received his doctorate at Harvard in 1925. His dissertation, a philosophical inquiry into imaginative and scientific possibility, was published in 1927 as Possibility.

From 1925 to 1929 Buchanan served as assistant director of the People's Institute, an educational outreach endeavor affiliated with Cooper Union College in New York City. The intent of the institute, founded in 1895 by Columbia University professor Charles Sprague Smith, was to deliver academic and literary lectures that would attract and invigorate a community of both recent immigrants and privileged intellectuals. With Buchanan's help, this popular approach to adult education soon included smaller discussions after and between the lectures and a series of seminars at public library branches. On the advice of Columbia University professor Mortimer Adler, Buchanan incorporated elements of the Columbia Honors Course in Great Books for the library seminar series. The original list of books was adopted from British intellectual Sir John Lubbock who devised it in the 1880s for publication and use in the Workers' and Mechanics' Institute in London.

While lecturing at the People's Institute, Buchanan explored the elements of poetry and mathematics and determined that relationships among the words of poetry and the ratios of mathematics deserved further inquiry. That inquiry became his book Poetry and Mathematics, published in 1929, the same year Buchanan accepted a faculty appointment in the philosophy department at the University of Virginia. There, he renewed his friendship with Stringfellow Barr, a professor of history, and worked with a committee on honors courses that pushed unsuccessfully for an emphasis on Great Books during the first two years of honors study. During a year-long leave of absence in England in 1931 through 1932, he studied the work of George and Mary Boole and other mathematicians, publishing his findings about symbols in literature and measurement in Symbolic Distance in Relation to Analogy and Fiction (1932).

In 1936 Buchanan and Barr left the University of Virginia at the invitation of Robert Maynard Hutchins, president of the University of Chicago, who was attempting to strengthen the liberal arts program against the wishes of many on his faculty. Buchanan and Barr joined Mortimer Adler and Richard McKeon, who had come to Chicago from Columbia University, and together they formed a Committee on Liberal Arts chaired by Buchanan. Although all four were instrumental in crafting the Great Books program at the University of Chicago, Buchanan worried about some of their philosophical differences. Within a year, he and Barr accepted the challenge of trustees of the barely surviving St. John's College, Annapolis, Maryland, to revive it as a prominent liberal arts college.

With Buchanan in the position of dean and Barr in the position of president, St. John's quickly became known as an intellectually exciting and innovative institution. Firmly defending the liberal arts, it required all students to read and discuss approximately 100 enduring classic texts of the Western intellectual tradition, from ancient Greece to the twentieth century. Tutors and Socratic seminars were the means to dialogue that illuminated the learning from these texts. The program areas covered included languages, mathematics, science, political science, philosophy, literature, music, and history.

Buchanan quickly became known as a brilliant thinker and teacher, as well as an ardent defender of the liberal arts during a time of increasing vocational education and a proponent of the required curriculum during a time of elective coursework. For him the aim of a liberal education was to spark insight, understanding, and imagination that would result in a disciplined and vibrant intellect prepared for lifelong learning. During his stay at St. John's, Buchanan joined with friends and associates Mark Van Doren, Mortimer Adler, Robert Maynard Hutchins, and others who sought to infuse liberal arts into the public debate about the ends and means of higher education. While at St. John's, he authored The Doctrine of Signatures: A Defense of Theory in Medicine (1938).

Buchanan left St. John's in 1947 to pursue a series of endeavors that were personally important to him. For two years, he directed Liberal Arts, Incorporated, in Pittsfield, Massachusetts. From 1948 to 1958, he served as a consultant, trustee, and secretary of the Foundation for World Government; and, during that time, he spent a year as chairman of the Department of Religion and Philosophy at Fisk University, Nashville, Tennessee. He became a founder and senior fellow of the Center for the Study of Democratic Institutions in Santa Barbara, California.

A final manuscript, Truth in the Sciences, remained unpublished when Buchanan died in 1968. It was published in 1972.

GREAT BOOKS PROGRAMS. In 1919, Columbia professor John Erskine began teaching a radical course on literature's "great books," discarding the weightiness of scholarship to allow students to engage in critical conversation about the texts. In 1931 his former student Mortimer Adler, with President Robert M. Hutchins of the University of Chicago, began a similar course. Combating trends toward academic specialization, they sought to provide core humanistic training and a democratic foundation for society. Widely implemented by universities, programs based on the "Great Books" remain a key part of core curricula. Hutchins and Adler created a program for adults in 1947 with the establishment of the Great Books Foundation. Based on cooperative learning, or "shared inquiry," the program motivates participants to think critically about the texts, spurred by curiosity rather than the proddings of an instructor. Great Books discussion groups were especially popular with the middle class through the 1950s–1970s, but interest tapered off in the 1980s. The foundation started its Junior Program in 1962, expanding it to the classroom in 1992 to integrate reading, writing, and discussion. The foundation's goals include enlarging the Great Books canon to include non-Western works and rejuvenating interest in discussion groups. Hutchins and Adler's legacy continued through their editions of the Encyclopaedia Britannica's Great Books of the Western World, used extensively in seminar courses and discussion groups.