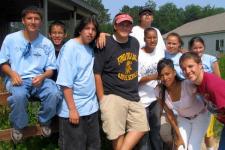 EDUCATION, INDIAN. For generations, Native Americans educated their children through ceremony, story telling, and observation, teaching them about their cultural heritage and a spiritual relationship with the earth and all beings. Then came the suyapo (the Yakama word for "white man"), whose education centered on one God, the written word, and a materialistic relationship with the earth. Colonial, and later U.S, educators thrust these values upon Indian children, but Native families also participated in schooling decisions. From the sixteenth through the early twentieth centuries, parents and communities sent selected youth to school to learn about the other culture, thereby empowering them as cultural intermediaries to serve their nations.

From the Colonial Era through the Nineteenth Century

Each of the European colonial powers offered some form of education to Native people. The Spanish Franciscans in the Southwest and the French Jesuit missions in the Great Lakes region promoted basic literacy. In the British colonies Roman Catholic and Protestant religious leaders introduced a more ambitious program of European education to children of Eastern Woodlands nations. From the awkward efforts of early tidewater Virginia to the sophisticated fund-raising network of Eleazar Wheelock, a Congregational minister who founded a coeducational boarding school in eighteenth-century Connecticut, colonial schoolmasters influenced hundreds of Native children.

The reputation of colonial educators overshadows that of Native schoolmasters of this era. Among the Iroquois and southern New England Algonquins, many Indian students emerged as teachers within their own communities or among neighboring tribes. As educational intermediaries, these Indian schoolmasters reinforced cross-cultural awareness. Echoing their ancestors, who traded extensively with other Native groups, they interpreted Euro-American culture to their people. Foremost among these Native educators, Samson Occom, a Mohegan Presbyterian minister, served Native groups of New England and New York. In the 1760s, Occom earned an international reputation when he preached in England, Wales, and Scotland, while raising thousands of pounds for Wheelock's school and his new venture, Dartmouth College. Purportedly founded for Indian students, Dartmouth catered largely to European Americans. Like its predecessors, Harvard and Princeton, Dartmouth graduated a handful of Indians who had survived disease and the foreign environment of the institution. Two centuries later, Dartmouth retrieved its legacy by reviving its Indian enrollment. In the colonial era, the College of William and Mary enrolled the greatest number of Indians, but their studies were limited to literacy and rudimentary arithmetic.

During the nineteenth century, thousands of Native people endured the traumas of warfare, disease, and removal. Nonetheless, small groups, both Indian and European American, remained committed to the education introduced by the outsiders. In the young Republic, the Christian denominations reached an agreement with Congress that was formalized in 1819 in the Indian Civilization Fund Act. In effect from 1819 to 1873, this measure promised an Indian education partnership between the federal government and "benevolent societies" (church related groups), ironically violating the constitutional mandate for se paration of church and state.

Although the Civilization Act stipulated a federal contribution of $10,000 per annum, in reality the federal portion remained below 10 percent. While the denominational groups raised additional funds, the Indian nations absorbed the greatest expense for their children's schooling because tribal leaders appropriated funds designated by educational provisions in their treaties. More than one-fourth of the almost four hundred treaties negotiated

between Indian nations and the United States contained federal promises of education.

Most of the early Indian schools opened in the Southeast, serving the Cherokees, Choctaws, Creeks, and Chickasaws. Initiated by the founding of Brainerd School among the Cherokees (1817) and the Choctaw Academy (1825), these schools reflected the willingness of portions of the southern Indian nations to welcome certain Protestant denominations who sought to open missions and schools within the nations' lands. These short-lived experiments were interrupted by the removal of eastern Indian nations to Indian Territory in the 1830s.

Following the wrenching removals, the relocated Indian nations established national school systems in their new lands in Indian Territory. The schools and seminaries of the five southern tribes (including the Seminoles) exemplified educational self-determination in Indian Territory until 1907, when the federal government unilaterally closed them as it created the state of Oklahoma.

In 1879, Richard Henry Pratt opened the Indian Industrial Training School in an abandoned army barracks in Carlisle, Pennsylvania. This event marked the beginning of federal Indian schooling. Pratt was a public-relations wizard who persuaded private donors and federal agencies to acknowledge Carlisle as the premier off-reservation Indian boarding school. Pratt believed in the potential of Indian youth to emulate their European American counterparts through what he dubbed "total immersion" education. During his twenty-five-year tenure at Carlisle, he supervised over five thousand Indian students from numerous tribes.

The early twentieth century saw the dramatic rise of Indian enrollment in public schools, but popular perception focused on the notorious schools operated by the Bureau of Indian Affairs (BIA). During the 1920s, reformers lambasted the federal boarding schools for their severe discipline, overcrowding and widespread disease, meager diet, and zealous assimilation tactics that demanded uniformity of language (English only) and appearance. Less well known is the fact that Indian students also molded these institutions. Developing initiatives that escaped contemporary observers, students, who came from many tribal backgrounds, used English as a lingua franca to form pan-Indian alliances and other secret networks that eluded the authorities and persisted well into their post schooling lives.

In the wake of growing criticism, Congress authorized an extensive study of federal Indian policy. The Meriam Report, published in 1928, confirmed that the government's critics had been correct. As a consequence, the educational reformers W. Carson Ryan and Willard W. Beatty, successive directors of BIA education (1930–1952), broadened the curriculum of BIA schools to include Native cultures. During the Indian New Deal, the commissioner of Indian Affairs John Collier (1933–1945) depended on a remarkable group of Indian leaders, including the Winnebago educator Henry Roe Cloud and BIA troubleshooters Ruth Muskrat Bronson (Cherokee) and D'Arcy McNickle (Metis/Flathead). But innovative changes were eclipsed by World War II, and bilingual texts, inclusion of Native art in schools, and summer institutes for BIA teachers quickly lost ground. By 1945 the postwar mood that spawned federal programs known as "termination" (of federal services to tribes) and "relocation" (of Indians to urban areas) persuaded Beatty to re-focus BIA school curriculum on education for urban life.

In the 1950s, however, the lack of schooling for thousands of Indians motivated the Navajo Nation, with 14,000 youth in this category, to challenge the BIA to address this need. Special programs, transfer to distant boarding schools, federal Indian-school construction, and further public schooling aided Navajo, Alaska Native, and Choctaw youth, and brought national Indian-school enrollment to over 90 percent by the mid-1960s.

By the 1970s, Indian leaders, tested on the battle-fields of World War II, Korea, and Vietnam, and in the fight against termination, were addressing issues of self-determination in Indian education. Galvanized by the Red Power insurgency of that decade, Native people stood ready to assume the direction of their children's education. Following the Kennedy Report (1969), a stinging congressional indictment of Indian education, Indian leaders worked with empathetic members of Congress to craft legislation that would enable Native Americans to shape the educational programs in their communities. During this path breaking decade, Congress enacted more legislation on Indian education than at any other moment in its history. Keynote measures began with the Indian Education Act (1972), which belatedly addressed the needs of Indians in public school—the vast majority of Indian children—by opening the Office of Indian Education within the U.S. Office (now Department) of Education. The Indian Self-Determination and Education Assistance Act (1975) provided the foundation for contracting. It enabled tribes and other Indian groups to contract with the federal government to provide specific services to tribal members, including health care and education. Directly after its passage, the All Indian Pueblo Council contracted to supervise the Santa Fe Indian School, the first of numerous such contracts.

Capping this legislative marathon, Congress also passed the Tribally Controlled Community College Assistance Act (1978), which provided funding for tribal colleges. Over thirty colleges were opened, beginning in 1969 with Navajo Community College (later Dine College), and including Haskell Indian Nations University in Lawrence, Kansas, and the Institute of American Indian Arts in Santa Fe. They have earned a significant place in American and Canadian Indian education and provide an alternative for the growing numbers of Indians earning undergraduate and graduate degrees at mainstream colleges and universities.

Although the administration of President Ronald Reagan attempted to modify these measures, the 1990s returned to a policy that celebrated the Indian voice. Native leadership directed the decade's national studies of Indian education, and Native communities—from grass-roots groups to organizations like the National Indian Education Association—crafted a blueprint for Indian education in the twenty-first century, coordinating their efforts with Bill Clinton's administration. The executive order "American Indian and Alaska Native Education," issued on 6 August 1998, reflected the tone of cooperation between Natives and the federal government. It opened with a frank, though often ignored, acknowledgment: "The Federal Government has a special, historic responsibility for the education of American Indian and Alaska Native students." As the new millennium opened, this promise emerged as a new reality, one that suggested strong Native leadership in Indian education.

———. Education and the American Indian: The Road to Self– Determination since 1928. 3d ed. Albuquerque: University of New Mexico Press, 1999.