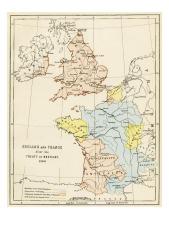 oxford
views updated
Brétigny, treaty of, 1360. After the Black Prince's great victory at Poitiers in 1356, Edward III resumed campaigning in 1359. But though inflicting great damage he was unable to land a knock-out blow and negotiations commenced in May 1360 at Brétigny, near Chartres. King John's ransom was to be cut and, in exchange for abandoning his claim to the throne of France, Edward was to have Guînes and Aquitaine in full sovereignty. These sweeping gains could not be substantiated and, after John's death, Charles V of France continued to claim suzerainty. See also Calais, treaty of.

Treaty Of Westminster , Westminster, treaty of, 1462. Edward IV, hoping to recover some of the influence in Scotland lost by the Wars of the Roses, agreed in 1462 at Westmin… Treaty Of Berwick , Berwick, treaty of Berwick, treaty of, 1560. The years 1558–60 were critical in Anglo-Scottish relations. The death of Mary Tudor in 1558 placed a pr… Intermediate-range Nuclear Forces Treaty 1987 , The Intermediate-Range Nuclear Forces Treaty of 1987 (INF) was the first nuclear weapons agreement requiring the United States and the Union of Sovie… Treaty Of Edinburgh , treaty of Edinburgh Edinburgh, treaty of Edinburgh, treaty of, 1560. The treaty has been claimed as a turning-point in Anglo-Scottish relations. Eliz… Treaty Of Amiens , Amiens, Treaty of The Napoleonic wars had reached a point where France and England concluded that further fighting was useless. Under the terms of th… Treaty Of Troyes , Treaty of Troyes Troyes, treaty of, 1564. At her accession in 1558, Elizabeth inherited from Mary a war against France in which Calais, a 200-year-ol…