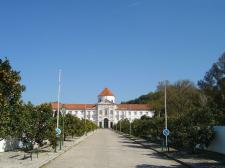 oxford
views updated
Torres Vedras. The lines of Torres Vedras were a system of defensive fortifications constructed by Wellington's engineers in 1809, and were situated 40 miles north of Lisbon to protect the city from French attack during the Peninsular War. They consisted of a series of forts and gun emplacements in three lines stretching some 30 miles from the river Tagus to the sea. Wellington fell back on the lines in October 1810 and held Masséna's French army at bay. In November Masséna was forced to retire to Spain with his army in poor condition.

Line , line1 / līn/ • n. 1. a long, narrow mark or band: a row of closely spaced dots will look like a continuous line I can't draw a straight line. ∎ Math.… Nelson Appleton Miles , Nelson Appleton Miles Nelson Appleton Miles Nelson Appleton Miles (1839-1925), American soldier, participated in many of the campaigns against the we… Battle Of Aboukir 1798 , Nile, battle of the Nile, battle of the, 1798. The site of this annihilating encounter between thirteen British ships of the line under Nelson, and t… Meuse , Meuse-Argonne Offensive MEUSE-ARGONNE OFFENSIVE (26 September–11 November 1918). In April 1917, when the United States declared war against the Centr… New River , New River New River. As Elizabethan London grew, the demand for water outstripped supply, prompting Sir Hugh Myddleton to construct an artificial wat… Atlanta Campaign , ATLANTA CAMPAIGN ATLANTA CAMPAIGN. Major General William T. Sherman's campaign in 1864 to capture Atlanta, Georgia, resulted in the loss of the Confe…