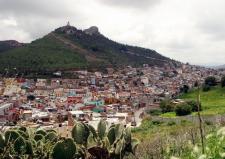 Zacatecas (säkätā´käs), state (1990 pop. 1,276,329), 28,125 sq mi (72,844 sq km), N central Mexico. Zacatecas is the capital. Lying on the central plateau, Zacatecas is a state of semiarid plains and mountains. The Sierra Madre Occidental dominates the western half, and a transverse spur (often over 10,000 ft/3,048 m high) of the same range, crossing the state from west to east, divides it. Rainfall is light and vegetation scanty. The absence of large rivers to support irrigation has limited agriculture. Cattle raising is a major activity, but the greatest industry is mining. With gold, silver, mercury, copper, iron, zinc, lead, bismuth, antimony, and salt, Zacatecas is one of Mexico's largest producers of mineral wealth. Low mineral prices, however, have led to the closure of many mines. In recent years there has been a significant outmigration from the state to the United States. After the territory, which under the Spanish also included Aguascalientes, was explored in 1530, it was initially not colonized, and it became a refuge for the indigenous peoples defeated in the Mixtón War. Their continued resistance led to a 1546 expedition from Nueva Galicia to suppress them. The discovery of silver shortly afterward caused a silver rush that all but depopulated Nueva Galicia. Zacatecas is known for its numerous examples of baroque architecture.

Zacatecas, city (1990 pop. 100,051), capital of Zacatecas state, N central Mexico. With an altitude of more than 8,000 ft (2,438 m), it is situated in a deep ravine surrounded by arid hills. The climate is temperate. The city is characterized by colonial buildings and narrow, winding, steep cobbled streets, frequently broken by stone steps. Zacatecas is a distribution center for the mining country as well as the commercial center for the region. Founded in 1548, the strategically located city was a key point in the Mexican wars and revolutions of the 19th and early 20th cent. Its cathedral was heavily pillaged during these struggles.