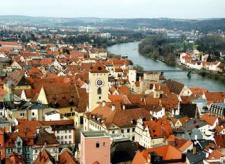 REGENSBURG (Ratisbon ), city in Bavaria, Germany. Its Jewish quarter was the oldest in Germany (1020). During the First *Crusade (1096) the whole community was forcibly converted but a year later was allowed to return to Judaism by *Henry iv. In 1182 Emperor Frederick i Barbarossa, apparently renewing a charter originally granted to the Regensburg community by Henry iv, stated the principles of his attitude, as emperor, toward the Jews and added in the preamble: "We concede to our Ratisbon Jews and confirm with our imperial authority their good customs which their ancestors secured through the grace and favor of our predecessors until our time." The economic clauses of this charter relate to the functions of Regensburg Jews in trade with Slav countries, detailing that "they be allowed to sell gold, silver, and any other kinds of metals and merchandise of any sort, and also to buy them, according to their ancient custom" (Aronius, Regesten, no. 314d, pp. 139ff.). Thus at this time Regensburg Jewry was regarded as a community of traders continuing the traditions of its founders. When this privilege was renewed by King Henry in 1230, a further provision stipulated that they might be brought before judges of their own choosing only. In the 12th and early 13th centuries, Christians also lived in the Jewish quarter and owned homes there. Between 1210 and 1217 a synagogue was built and a plot for a cemetery acquired in 1210. By the end of the 12th century Regensburg had become a religious and cultural center for German Jewry. Among its rabbis were *Baruch b. Isaac, *Ephraim b. Isaac, and *Isaac b. Moses of Vienna (the author of Or Zaru'a). *Judah b. Samuel he-Ḥasid made the city the cradle and center of the *Ḥasidei Ashkenaz. Even in the 15th century, a time of economic decline and trouble, Regensburg attracted such luminaries as Israel *Bruna. At this time Regensburg yeshivot developed a pilpul and ḥillukim style of their own contrasted in the Ashkenazi yeshivot with that of Nuremberg. The economic importance of the community enabled it to weather the *Rindfleisch (1289), *Deggendorf (1338), and *Black Death persecutions (1348/49) and to reach new heights of prosperity by offering asylum to rich refugees. *Moneylending to secular and ecclesiastic princes, in addition to the merchants of the city, was conducted on a large scale.

In the 14th century the community suffered from heavy taxes and was hit by the annulments of debts to Jews decreed by Emperor Wenceslaus ii in 1385 and 1390. After the time of the Black Death the municipality's aspirations to "ownership" of the Jews grew; its fiscal extortions were as severe as those of the Jews' other "owners" – the emperor, the duke of Bavaria, and the local bishop. Gradually the Jews were forced to rely mainly on moneylending, and their freedom of movement was severely curtailed. The general decline and impoverishment of Regensburg, combined with growing social tension between the upper and lower classes of the citizenry, made the years 1475–1519 a period of increased bitterness against the Jews, a struggle that ended in their total expulsion. The violent anti-Jewish sermons of Peter *Schwarz (Nigri) resulted in the confiscation of the property of the whole community (1476); following the accusation by one of the defendants in the *Trent ritual murder trial 17 Jews from Regensburg were imprisoned. After four years, under unremitting pressure from Frederick iii, the city was forced to free them. Frederick exacted a heavy fine from the city and also a pledge that it would not expel its Jewry. Balthasar Hubmeier (1485–1528), later the Anabaptist leader, was the most virulent of many preachers who accused the Jews of usury and blasphemy and repeatedly demanded that the synagogue be converted into a church; the guilds insisted on expulsion. In 1498 the community was led by ten elders; its *takkanot were enacted by majority vote in a council of 31. At this critical period of its history, the community's ordinances dealt with the preservation of internal peace (R. Straus, Urkunden… (1960), no. 676, pp. 228–30). When Emperor Maximilian died in January 1519, the interregnum was made the occasion for the immediate expulsion of the Jews, about 800 in all. The synagogue was razed and a chapel, which became the center of mass pilgrimages, was erected on the site. About 5,000 gravestones were wrenched out of the cemetery and used for building. Trophies of the "victory against the Jews" were prominently displayed on walls of houses in Regensburg and other cities. Most of the refugees settled in nearby Stadtamhof, on Bavarian territory, but were later expelled from there too (1551).

In 1545 the city received the privilege of non recipiendis Judaeis from *Charles v and guarded it jealously in the future. Nevertheless, Jewish *shtadlanim, *Court Jews, and physicians continued to be present at the meetings of the Reichstag of the Holy Roman Empire, which were occasionally held in Regensburg. From 1669 the Reichstag convened regularly in Regensburg, and a Jewish settlement affiliated to the assembly sprang up under the protection of the hereditary dukes von Pappenheim. The number of *Schutzjuden was bitterly contested between the dukes and the city and was finally fixed at three to four families (60–80 persons) throughout most of the 17th and 18th centuries. In the latter half of the 18th century Isaac Alexander gained temporary fame as the first rabbi to write on contemporary philosophical subjects in Germany. Philip Reichenberger (1750–1818), court agent of Ansbach and Brandenburg, and Wolf *Breidenbach led the fight for the abolition of the *leibzoll ("body tax"). In 1805 the three richest families were granted the right to own land. Reichenberger unsuccessfully requested full citizenship in 1808. Regensburg passed to Bavaria in 1810. A cemetery was consecrated in 1822 and a synagogue in 1841. The community grew from 180 persons in 1810 to 635 in 1880 (1.96%); after this it declined gradually.

Under the Nazi regime the number of Jews decreased from 427 in 1933 to 226 in 1939. On Nov. 9, 1938, the synagogue was burned down, shops and homes were pillaged, and almost all the men arrested. About 230 Jews (including some from the countryside) were deported in 1942 to Theresienstadt, Auschwitz, and Lublin. After World War ii a new community was organized, with 140 persons in 1970 (two-thirds over the age of 40) and its own rabbi and shoḥet.

The history of Regensburg's medieval Jewish community became one of the outstanding instances of Nazi historiography when it was falsified by the Nazi historian Wilhelm Grau in his Anti-semitismus im spaeten Mittelalter (1934). He used the sources collected by the Jew Raphael Straus (published posthumously in 1960), which had been confiscated by the Gestapo. A new community center was consecrated in 1969. The Jewish community numbered 117 in 1989 and about 1,000 in 2005. The increase is explained by the immigration of Jews from the former Soviet Union.

oxford
views updated
Regensburg (Fr. Ratisbon) City and port at the confluence of the Danube and Regen rivers, Bavaria, s Germany. Founded by the Romans as Castra Regina, it was captured by Charlemagne in 788. During the 13th century, Regensburg flourished on the commercial trade with the Middle East and India and became an imperial free city. From 1663 to 1806, it was the seat of the Imperial Diet. In 1810, Bavaria annexed Regensburg, and in 1853 ir became a free port. Pop. (1999) 125,200.

Heilbronn , HEILBRONN HEILBRONN , city in Baden-Wuerttemberg, Germany. There apparently were Jews living in Heilbronn in the second half of the 11th century, as… Toulouse , TOULOUSE (Heb. טולושה), capital of the department of Haute-Garonne, in southern France. According to a legendary tradition, there were Jews in Toulou… Landau , LANDAU LANDAU , city in Rhenish Palatinate, Germany. Jews were first mentioned in Landau in the late 13th century. A Judengasse is noted in 1329. In… Dortmund , DORTMUND (Heb. תירמוניא), city in Germany. A privilege issued by Emperor Henry iv to the city of *Worms in 1074 granted the Jews there trading rights… Nuremberg , NUREMBERG (Ger. Nuernberg ), city in Bavaria, Germany. A report of 1146 records that many Jews from Rhenish towns fled to Nuremberg, but Jews are fir… Hanover , HANOVER (Ger. Hannover ), city in Germany. Sources dating from 1292 note the presence of Jews in Hanover's "old city" (Altstadt). The period was one…