National Council of the Churches of Christ in the U.S.A 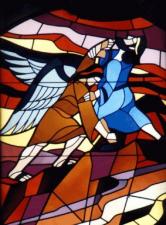 NATIONAL COUNCIL OF CHURCHES. The National Council of Churches (NCC), formally known as the National Council of Churches of Christ in the United States of America, was founded in Cleveland, Ohio, in 1950. Conceived as an umbrella association exerting no formal control over its members, the NCC has facilitated cooperation among the major Protestant denominations and several Orthodox communions, and has relayed the concerns of its member groups to the United Nations. Historians consider it the voice of the Protestant establishment, though it has always counted non-Protestant Christians among its members. The NCC was born of the ecumenical impulse that had been building in America since the nineteenth century, when Protestants forged interdenominational ties around issues such as the missionary enterprise, abolitionism, temperance, and urban reform. The Evangelical Alliance was the largest and most powerful of these organizations until the formation of the Federal Council of Churches (FCC) in 1908.

During the FCC's lifetime, activities such as religious education and missions at home and abroad remained the province of independent interdenominational groups. However, this lack of centralization became increasingly intolerable to many Protestant leaders in the post–World War II atmosphere of universalism and institution building. The proliferation of interdenominational groups seemed to perpetuate the problems of denominationalism, including duplication of effort and communication difficulties. Rising interfaith tensions in the politicized religious climate of the early Cold War years also convinced many Protestants of the need for a centralized agency to represent the major Protestant denominations in negotiations with other religious groups. The 1948 inaugural meeting of the World Council of Churches, an international ecumenical organization unprecedented in its scope, inspired a group of American Protestant leaders to fully consolidate their interdenominational activities at the national level.

The NCC was a merger of the Federal Council of Churches and seven interdenominational agencies, including the Foreign Missions Conference of North America, the Home Missions Council of North America, and the International Council of Religious Education. At its inception, the organization represented twenty-nine Christian bodies: twenty-five from major Protestant denominations (Presbyterian, Reformed, Methodist, Baptist, Lutheran, Moravian, Quaker, Episcopal, Congregational, Christian

Church, and Church of the Brethren) and four Eastern Orthodox communions. Neither the Roman Catholic Church nor the fundamentalist Protestant members of the National Association of Evangelicals, founded in 1942, joined the NCC.

Since its founding, the NCC's functions have expanded steadily, and its internal structure, originally comprising divisions of Home Missions, Foreign Missions, Christian Education, and Christian Life and Work, has been altered several times. In the early twenty-first century, the NCC continued to provide day-by-day support to its member groups in their basic tasks of evangelism, education, missionary work, and social welfare by offering consultation and sponsoring conferences, workshops, publications, public lobbies, and service agencies. Driven by the conviction that Christian faith demands social action, the NCC has worked nationally and internationally to promote brotherhood between Christians and non-Christians, cross-cultural understanding, peace, human rights, and anti-poverty measures. Because it brings together Christians with a wide range of political perspectives, the NCC has always been subject to internal tensions regarding controversial social issues and policy questions. Nevertheless, though its cultural influence has declined since 1970, the NCC sustains a broad coalition of moderate to liberal, non–Roman Catholic Christians.

The Christian Century, vol. 67, no. 50 (December 13, 1950). This volume is devoted to the founding of the National Council of Churches. Available from http://www.ncccusa.org.

Hutchison, William R., ed. Between the Times: The Travail of the Protestant Establishment in America, 1900–1960. New York: Cambridge University Press, 1989.

United Church Of Christ , UNITED CHURCH OF CHRIST. Although the United Church of Christ (UCC) is a relatively young Protestant denomination, formed in 1957, the historical roo… Congregationalism , Congregationalism ★453 ★ Congregational Union of Canada (Defunct) (The Congregational Union of Canada no longer exists as a separate entity. It is no… Eastern Orthodoxy , Eastern Orthodox Christianity arrived in North America in the late 1700s by way of Russian Orthodox missionaries from the Valaam monastery who evange… Willem Adolf Vissert Hooft , Willem Adolf Visser 't Hooft (1900-1985) was a Reformed churchman from the Netherlands, of remarkable vision, who became the first general secretary… Confessing Church , Confessing Church, Ger. Bekennende Kirche, German Protestant movement. It was founded in 1933 by Martin Niemoeller as the Pastors' Emergency League a… Lutheranism , Lutheranism, branch of Protestantism that arose as a result of the Reformation, whose religious faith is based on the principles of Martin Luther, al…