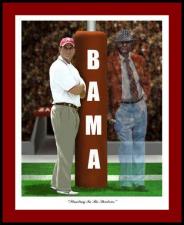 At the time of his retirement in 1982, Paul "Bear" Bryant (1919-1983), legendary coach of the University of Alabama's "Crimson Tide" football team, then had the best record of any coach in college football history: 323 wins, 85 losses, and 17 ties. Sixty-five of his former college players were in professional football, and 44 more were head coaches of college or professional teams.

The future coach was born Paul William Bryant on September 11, 1919, in a rural area of Arkansas known as Moro Bottom, the 11th of 12 children of William Monroe and Ida Bryant. He received the nickname "Bear" after wrestling a muzzled bear at a carnival. After the death of his father, the family moved to nearby Fordyce, Arkansas. In high school there Bryant participated in football, basketball, baseball, and track. He played on the 1930 Arkansas state high school football champion team as an offensive end and defensive tackle. He was scouted and recruited by the University of Alabama.

From 1932 to 1936 he attended Alabama and played on the football team. During the 1933-1934 season he was the starting offensive end. In 1935 he played on the Alabama team that defeated Stanford University in the Rose Bowl. After graduation in 1936 he stayed at Alabama as an assistant football coach. In 1940 he left to accept a similar position at Vanderbilt University. World War II interrupted his football career and he enlisted in the U.S. Navy, achieving the rank of lieutenant commander. After the war he accepted the head football coaching position at the University of Maryland. He stayed at Maryland one year, leaving to become the head football coach at the University of Kentucky. In his years at Kentucky he compiled a record of 60 wins, 23 losses, and 5 ties. In 1950 Kentucky won the Southeast Conference title by defeating Oklahoma University. During his tenure there Kentucky went to the Great Lakes, Orange, Sugar, and Cotton bowls.

He left Kentucky in 1954 to accept the head coaching position at Texas A&M University. There he had his only losing season. After four years, however, his record stood at 25 wins, 14 losses, and 2 ties. In 1954 his team won the Southwest Conference title. Texas A&M won the conference title again in 1956, but was barred from participating in the Cotton Bowl because of recruiting violations. In 1957 the Aggies lost to Tennessee in the Gator Bowl, but Bryant had coached his first Heisman Trophy winner, John David Crow.

Bryant returned to Alabama as head football coach in 1958. In his first year back at Alabama went 5-4-1. In his second year they went to the Liberty Bowl, the first of 24 consecutive trips to bowl games. He became known as a tough disciplinarian who demanded the best from his players. He had them live together in a special dormitory, and they all ate together. This toughness, however, was bolstered by integrity and fairness. He expected nothing from his players that he was not willing to give of himself. And his approach to the game paid off. Alabama football teams won six national championships and 13 Southeastern Conference titles. This remarkable accomplishment brought national attention to Alabama, and Bryant, wearing his trademark houndstooth hat, became a familiar figure on the sidelines during televised games.

In 1962 the Saturday Evening Post published an article that accused Bryant of coaching in a manner that encouraged unsportsmanlike conduct. The article was apparently prompted by an incident that had occurred during the game between Alabama and Georgia Tech played on November 18, 1961. A Tech player going downfield to cover a punt was blocked out of bounds by an Alabama player who used what is called a forearm shiver. The blow to the face broke the Tech player's jaw. As a result, the friendship between Bryant and Tech's coach Bobby Dodd was ruined. Georgia Tech dropped Alabama from its schedule and later left the Southeastern Conference. Bryant filed suit against the magazine.

The Post then published another article accusing Bryant and coach Wallie Butts of the University of Georgia's football team of rigging a game, a game that Alabama had won 35-0. Bryant again filed suit against the Post. One of the best known public figures in Alabama, Bryant went on statewide television to proclaim his innocence. Bryant's lawyers protested to the Post and asked that the charges be withdrawn. The Post, however, stood by the story, and Bryant filed his third lawsuit against the magazine.

Wallie Butts had filed suit against the Post as well, and his suit went to trial first. Bryant appeared to testify in support of Butts. He displayed the same style on the witness stand as he did on the football field sidelines. Confident and dignified, he still could not suppress his rage at the charges, and appeared near tears at times during his testimony. The jury ruled in favor of Coach Butts and awarded general as well as punitive damages. Bryant's suits never made it to the courtroom. Curtis Publishing, publisher of the Post, published a retraction and awarded a cash settlement.

Bryant was named Southeastern Conference (SEC) "Coach of the Year" eight times. In 1968 sportswriters voted him all-time SEC coach. Bryant, however, believed that a head coach was only as good as his assistants. On December 15, 1982, Bryant retired as head coach position and became athletic director at Alabama. He was succeeded by Ray Perkins, a former coach of the New York Giants of the National Football League. Less than two months later, on January 26, 1983, Bryant died of a heart attack. In 1986 he was elected to the College Football Hall of Fame, in his first year of eligibility. The Bear Bryant Award is given each year to the top college football coach.

Bear, Bryant's autobiography, was published in 1974. It is a remarkably modest story of his life, in which he gives all of the credit for his success to his mother. The Legend of "Bear" Bryant (1987) by Mickey Herskowitz is an emotional tribute to Bryant by one of his greatest admirers. Another good book, this one about the entire Alabama program, is The Crimson Tide: A Story of Alabama Football (1973) by Clyde Balton.

Reed, Delbert, Paul "Bear" Bryant, what made him a winner: analyses, comments, and memories by those who knew him best, Northport, Ala.: Vision Press, 1995. □