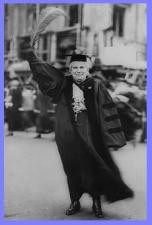 Anna Howard Shaw was born in Newcastle-upon-Tyne, England, on Feb. 14, 1847, but was raised near Big Rapids, Michigan. She studied at Alma College in Michigan and at Boston University's theological school, from which she graduated in 1878. Pastoral work grew tiresome, and at the age of 35 she entered Boston University's medical school, receiving her medical degree in 1886. The practice of medicine proved equally unsatisfying, and she abandoned it for lecturing and temperance activities. She rose to head the suffrage department of the Women's Christian Temperance Union before leaving for the National American Woman Suffrage Association (NAWSA).

Susan B. Anthony, then president of NAWSA, valued Dr. Shaw's oratorical talents highly and put them to frequent use. But when Anthony resigned in 1900, she chose Carrie Chapman Catt to succeed her. Four years later Catt resigned, and Dr. Shaw's loyalty was rewarded. Although she was president of NAWSA for 11 years, her tenure was not a success. NAWSA had become a large national organization that demanded diplomatic, political, and administrative talents that Dr. Shaw lacked. Moreover, she was a hot-tempered, pugnacious woman and offended both friends and enemies of woman's suffrage. An associate said that she was very witty, but always terribly down on men, and sometimes one really almost winced when she attacked them so vigorously that they got red in the face and looked ready to do murder."

By 1915 it was apparent that while support for women's suffrage was growing, Dr. Shaw was incapable of translating this into votes for women. Accordingly, she was replaced by Carrie Chapman Catt, who led NAWSA to victory in less than five years. Dr. Shaw accepted this demotion with good grace and distinguished herself as chairman of the Woman's Committee of the Council of National Defense, when the United States entered World War I. Though the Woman's Committee was only a symbol of the government's appreciation of women's eagerness to serve, it amounted to more than that, thanks largely to Dr. Shaw, whose stubborn energy compelled the government to give women more responsibility. She died in Moylan, Pennsylvania, on July 2, 1919, only 16 months before she would have exercised the right to vote; the right for which she gave half her life to win.

Anna Howard Shaw's autobiography, The Story of a Pioneer (1915), is revealing. Much useful material on her is in Historyof Woman Suffragevol. 4, edited by Susan B. Anthony and Ida Husted Harper (1902), and vols. 5 and 6, edited by Ida Husted Harper (1922). William L. O'Neill, Everyone Was Brave: The Rise and Fall of Feminism in America (1969), discusses her work on the Woman's Committee. □