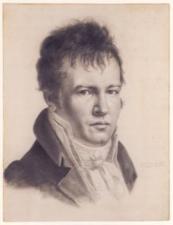 The German educator, statesman, political theorist, and philologist Baron Wilhelm von Humboldt (1767-1835) reformed the Prussian school system and founded the University of Berlin. He was influential in developing the science of comparative philology.

Wilhelm von Humboldt was born in Potsdam on June 22, 1767. He studied law in Berlin and Göttingen. In his essay Ü ber das Studium des Klassischen Altertums (1793) he summarized his program for educational reform, which was basically the program of German neohumanism. In Jena (1794-1797) he was a member of Friedrich von Schiller's circle. After traveling through Spain and France, during which Humboldt became interested in philology, he was appointed Prussian resident minister in Rome (1802-1808).

Humboldt was influenced by the educational principles of Johann Pestalozzi. As Prussian minister of education (1809-1810), he sent teachers to Switzerland to study Pestalozzi's methods, and he founded the University of Berlin (1809). Humboldt's ideas profoundly influenced European and American elementary education.

From 1810 to 1819 Humboldt served the government as minister in Vienna, London, and Berlin. He resigned from the ministry in protest against the reactionary policies of the government. His philological works on the Basque language (1821) and on Kavi, the ancient language of Java, published posthumously (1836-1840), were landmarks in their field. He died at Tegel on April 8, 1835.

In The Sphere and Duties of Government (published in part in 1792 and completely in 1851) Humboldt held that although the nation-state is a growing body, government is only one of the means aiding its welfare, a means whose sole aim should be to provide security for social development. As in biological evolution, all growth is good, as it brings forth an organism more complex, more diverse, and richer, and government—while a major agent in fostering this development—is not the only one. If it tries to do too much, it interferes with and retards the beneficial effects of other agencies.

Under the influence of romanticism Humboldt became almost mystical as he placed more stress on supra-individual and historically conditioned nationality and viewed individual nationality in turn as part of the universal spiritual and divine life which was the characteristic expression of humanity. In essays on the German (1813) and Prussian (1819) constitutions he advocated a liberalism which would preserve the unique character and traditions of individual states, provinces, and regions, with the constitution of any state adapted to the particular genius of its national character. He rejected both the artificial and atomistic liberalism of the French Revolution, which derived the state from the isolated and arbitrary wills of individuals, and the ultraconservative program to revive the old feudal estates. He advocated a liberalism grounded in tradition with regional self-governing bodies participating in governing a monarchical civil service state.

There is no definitive biography in English on Humboldt. One work is Hermann Klencke, Lives of the Brothers Humboldt, Alexander and William (trans. 1952). Humboldt is discussed or mentioned in the following works: Henry Barnard, Pestalozzi and His Educational System (1881); Eugene Newton Anderson, Nationalism and the Cultural Crisis in Prussia, 1806-15 (1939); Leonard Kreiger, The German Idea of Freedom (1957); and Walter Horace Bruford, Culture and Society in Classical Weimar, 1775-1806 (1962).