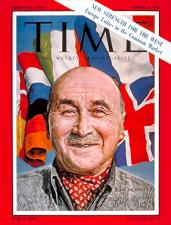 The French economist Jean Monnet (1888-1979) was primarily responsible for the introduction of national economic planning in post-1945 France and was an outstanding leader in the postwar movement for the unification of Europe.

The son of an important brandy distiller, Jean Monnet was born at Cognac on Nov. 9, 1888. Highly intelligent, ambitious, and well-connected, while he was still a young man in his 20s he was appointed to represent France on the Interallied Maritime Commission during World War I. He participated in the preliminary meetings for the Versailles Conference and in 1919 was appointed deputy secretary general and financial adviser of the League of Nations.

On the death of his father in 1923, Monnet resigned from the League and took over the declining family business. After reorganizing and modernizing it, he became a free-lance economist and financial adviser to foreign governments. In this capacity he advised the Chinese how to manage their railroads, the Austrians how to reorganize their banking system, and an American investment bank how to place its capital overseas. Following the suicide of the Swedish financier Ivar Kreuger in 1932 he supervised the liquidation of Kreuger and Toll, the great international match trust.

In 1939, with war approaching, Monnet was called back to government service. His first task was to negotiate the purchase of warplanes from the United States. Shortly thereafter he became chairman of the Franco-British Economic Coordination Committee in London. There in June 1940 he played a central role in the abortive attempt to fuse the British and French empires. After the fall of France, Monnet was accredited as a diplomat by the government of Winston Churchill. During much of the war he was headquartered in Washington, D.C., as a member of the British Supply Council.

When he arrived in the United States, Monnet was alarmed at America's unreadiness for war. Convinced that the United States must eventually enter the war against the Germans and Japanese, he persuaded American officials to calculate what would have to be produced to win victory. He supervised this project, and when the United States found itself at war after the Japanese attack on Pearl Harbor in December 1941, a plan for America's economic and military mobilization—the famed "Victory Program"—was in hand. The plan accurately provided targets and guidelines for American production during the years 1942-1945. Had it not been for Monnet's alarm and advice, the American war effort would have followed a far more erratic course.

In 1943 Monnet was sent by the American government to Algiers with the task of arranging a reconciliation between Gen. Charles De Gaulle and Gen. Henri Giraud. Returning to France in 1944, he became minister of commerce in the provisional government of De Gaulle, who distrusted Monnet's "antinational" tendencies and his "everlasting efforts to mix the unmixables." In 1945 Monnet proposed that the government should adopt a "plan for the modernization and equipment of the French economy." His recommendations were accepted, and in January 1947 he was appointed commissioner general for planning, a post he held until 1955. Because of the great influence and prestige that accrued to him as he presided over the postwar "economic miracle" of France, Monnet's critics often portray him unflatteringly as the éminence grise of the Fourth Republic.

In 1949 Monnet suggested the fusion of the coal and steel industries of Germany and France as a means of preventing any future war between these two traditional rivals. The idea was quickly taken up by the foreign minister, Robert Schuman, and ratified the following year by the parliaments of both countries. From 1952 to 1955 Monnet served as the first president of the High Authority of the newly created European Coal and Steel Community.

In 1955 Monnet founded the Action Committee for the United States of Europe and became its president in 1956. It was eventually disbanded in 1975. He was a driving force behind the organization of the Common Market, which was established by the Treaty of Rome in 1958. For these and other services to the European cause he was awarded the first Robert Schuman Prize by the University of Bonn in 1966. In his later years Monnet lived in active retirement, while remaining an outspoken advocate of further efforts toward European unity. He died in 1979.

There is no biography of Monnet. His role in postwar French and European affairs can be traced in detail, however, in Herbert Luethy, France against Herself (trans. 1955), and in Alexander Werth, France, 1940-1955 (1956); both authors discuss Monnet with undisguised hostility. □

Raymond Barre , Raymond Barre Raymond Barre Raymond Barre (born 1924) served as prime minister of France from 1976 until 1981, heading the last of the Gaullist-Gisca… Treaty Of Rome , Rome, Treaty of EURATOM THE EUROPEAN ECONOMIC COMMUNITY BIBLIOGRAPHY From 1 to 3 June 1955 the foreign ministers of the six members (Belgium, Federal… Dawes Plan , REPARATIONS, 1919–1923 THE DAWES COMMITTEE PROVISIONS OF THE PLAN CREDITOR AND DEBTOR ADVANTAGES CONSEQUENCES BIBLIOGRAPHY The Dawes Plan was an inte… Quasi-war With France , France, Quasi-War with FRANCE, QUASI-WAR WITH. The Quasi-War, or naval war, with France, included a series of battles and diplomatic tensions between… Robert Schuman , Robert Schuman The French statesman Robert Schuman (1886-1963) was the public author of the plan that pooled the French and German coal and steel ind… Pierre Mendes-france , Pierre Mendès France Although Pierre Mendès France (1907-1982) only held the prime ministry for seven months and spent most of his political career c…