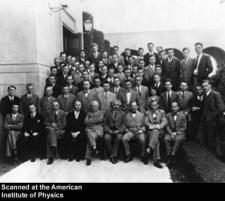 An irascible maverick, Fritz Zwicky had a penchant for investigating extreme phenomena, speculating outside the confines of prevailing theory, and undertaking ambitious observational programs. His most significant work was in astrophysics, where he initiated research on supernovas and coordinated the preparation of important catalogs of galaxies.

At the age of six, Zwicky—the eldest of the three children of Fridolin Zwicky, a Swiss merchant, and his Czech wife, Franziska Wrcek Zwicky—was sent for schooling to his ancestral district in Glarus, Switzerland. In his teens he did so well in science courses that upon the urging of his teachers, his father allowed him to train for engineering rather than commerce. Accordingly, in 1914 he went to Zurich, where he attended the Oberrealischule and then the Eidgenössische Technische Hochschule (ETH). Midway through the ETH, Zwicky displayed characteristic independence by transferring from mechanical engineering to mathematics.

In 1920, having passed examinations in experimental physics and mathematics, and having written an acceptable essay for Hermann Weyl on reflection in an inhomogeneous stratum, Zwicky received his teaching diploma. Two years later he took a doctorate in theoretical physics at the ETH with a dissertation on the theory of ionic crystals, written under Paul Scherrer and Peter Debye. He remained at Debye’s Physical Institute until mid 1925, when he went to the California Institute of Technology as an International Education Board fellow to work with Robert A. Millikan and Paul Epstein. Thenceforth, despite his steadfast loyalty to and frequent stays in Switzerland, Zwicky operated out of Pasadena. From 1927 to 1968 he was a faculty member at Caltech; from 1943 to 1961, the research director and then a research consultant at Aerojet Engineering in Pasadena; and from 1948, an astronomer at the Mount Wilson and Palomar observatories.

Zwicky married twice. On 25 March 1932 he married Dorothy Vernon Gates, whose father had long been a California state senator; they were divorced in 1941. On 15 October 1947 he married Anna Margarita Züucher, whose father was a prominent Bernese hotel owner. He had three daughters by his second wife. Zwicky enjoyed mountaineering, making many first ascents in the Alps. He also devoted much time to charitable activities, especially to helping rebuild scientific libraries destroyed during World War II and to participating in the Pestalozzi Foundation of America’s program of aid to orphanages.

During the decade following his doctorate, Zwicky worked mainly on the equations of state for gases, liquids, and solids. However, his papers on such subjects as the specific heat of electrolytes and cooperative effects in imperfect crystals attracted little attention. Meanwhile, inspired by Millikan’s research on cosmic rays, Edwin P. Hubble’s discovery of the distance-red shift relation, and George E. Hale’s success in raising funds for a two-hundred-inch telescope on Mount Palomar, Zwicky began thinking about astrophysical questions. In 1928 he maintained that the entire chain of reactions linking radiation to galaxies must be considered when analyzing the postulate that the universe is in thermodynamic equilibrium. The following year, before Arthur S. Eddington and others began using Hubble’s relation to argue that the universe is expanding, Zwicky proposed that the light from distant galaxies is red-shifted because of a gravitational drag. And in 1933 he and Walter Baade, who in 1931 had joined the Mount Wilson staff, began teaching astrophysics at Caltech. This enabled Zwicky to acquire a more systematic command of the field.

Zwicky and Baade were evidently led by Zwicky’s continuing interest in Hubble’s relation to consider whether exceptionally bright novas, which had been distinguished from ordinary novas by K. Lundmark in 1919, might be used as distance indicators for far-off galaxies. In late 1933, pursuing this idea as well as Zwicky’s interest in the origin of cosmic rays, they concluded that these bright novas, which they named “supernovas,” were of great intrinsic interest. They proposed that supernovas occur once a millennium in typical galaxies, that they signal the transformation of ordinary stars into “neutron stars,” and that they give rise to cosmic rays. Zwicky followed up on these speculations by searching the Virgo cluster of galaxies for supernovas with a Wollensack 3.25-inch-lens camera. Frustrated by his inferior equipment, he persuaded Caltech’s Observatory Council to install an eighteen-inch, large-field Schmidt telescope at Palomar.

In early 1936, before the Schmidt was completed, Zwicky was scooped by Hubble and G. Moore, who, using a ten-inch refractor at Mt. Wilson, found a supernova in one of the Virgo galaxies. A year later, as the first observer to work at Palomar, he began finding supernovas. Over the next few years, Zwicky, Baade, and Rudolph Minkowski used Zwicky’s first twelve supernovas to establish their infrequency, spectra, and light curves. After this flurry of work, Zwicky did not resume his study of supernovas until the mid 1950’s, when he began a successful campaign for an international supernova patrol. Finally, in the late 1960’s, thanks mainly to the radio astronomers, he had the satisfaction of seeing his hypothesis that supernovas result in neutron stars enter the mainstream of astronomy.

In 1937, as he was finding his first supernovas, Zwicky was beginning a long-term program of cataloging galaxies and clusters of galaxies with the Schmidt telescope. His goal was to amass data that not only would facilitate his supernova search but also would allow statistical calculations of mean galactic mass. After the war he and his collaborators continued this project, eventually producing catalogs of galaxies (1961–1968) and compact galaxies (1971).

Despite the skepticism with which astronomers regarded much of Zwicky’s interpretive work, his research on supernovas and galaxies was of such importance that he was invited to give Oxford University’s Halley lecture in 1948 and was awarded the Royal Astronomical Society’s Gold Medal in 1972. In his Halley lecture he broke with the tradition of discussing a celestial phenomenon, focusing instead on his “morphological” method and its applications in astronomy. The lecture must have struck much of Zwicky’s audience as rather impenetrable. But his basic point—that astronomers should be more resolute about considering all the options when designing equipment and interpreting phenomena—reflected his abiding concern that his colleagues were too set in their ways.

Besides his astronomical research, Zwicky played a role in the development of jet propulsion and rocketry during and after World War II. He evidently helped Theodore von Kármán raise the capital for Aerojet Engineering Corporation, a firm established in 1942 to stimulate as well as serve the military’s interest in jet aircraft and rockets. Appraisals of his performance as Aerojet’s director of research, though vague, indicate that he was exceptionally energetic and inventive. Perhaps more important than his work at Aerojet was his leadership in 1945 and 1946 of U.S. Air Force teams that went first to Germany and then to Japan to evaluate wartime research on jet propulsion in these countries and to promote the effective transfer of their best technology to the United States. In 1949 Harry Truman recognized this contribution by awarding Zwicky the Presidential Medal of Freedom.

In late 1946 Zwicky attempted to use an early V-2 shot at white Sands, New Mexico, to launch some “artificial meteors.” His apparatus failed, and because those coordinating upper atmospheric research regarded his idea as no more than a stunt, he did not get a second chance until October 1957. Then, in a U.S. Air Force Aerobee launching that was planned before Sputnik but carried out twelve days later, Zwiicky made a second try. If as he repeatedly claimed, he was successful, his tiny pellets were the first interplanetary objects launched from Earth. In subsequent years he was a tireless proponent of space exploration and space law, eventually becoming a vice president of the International Academy of Astronautics.

Zwicky’s methodological works include “Morphological Astronomy”, in Observatory, 68 (1948), 121–143; and Morphological Astronomy (Berlin, 1957). A copy of his “Report on Certain Phases of War Research in Germany” (1 October 1945) is in the California Institute of Technology’s Archives. His most informative autobiographical writings are the “Lebenslauf” in his dissertation, Zur Theorie der heteropolaren Kristalle (Leipzig, 1922), 17; “Review of the Researach of Supernovae”, in Cristiano B. Cosmovici, ed., Supernovae and Supernova Remnants (Dordrecht and Boston, 1974), 1–16; and “A Stone’s Throw into the Universe: A Memoir”, in Essays on the History of Rocketry and Astronautics, II, NASA Conference Publication 2014 (Washington, D.C., 1977), 325–337.

A complete listing of Zwicky’s 559 publications is in the California Institute of Technology’s Astrophysics Library. His papers, which include more than 10,000 letters to and from some 2,000 corresspondents, are at the Landesbibliothek, 8750 Glarus, Switzerland. Materials bearing on Zwicky’s IEB fellowship and his early years at Caltech are in the Rockefeller Archive Center, North Tarrytown, New York. The University of Zurich’s Archives hold an interesting set of papers connected with the decision to offer him Erwin Schrödinger’s former chair in 1928. For materials bearing on his reaserach and his relations with his Caltech and Mount Wilson colleagues, see the Millikan, von Kármán, DuBridge, and Greenstein papers in the Caltech Archives. A copy of Zwicky’s interview with R.C. Hall (17 May 1971) is also there.