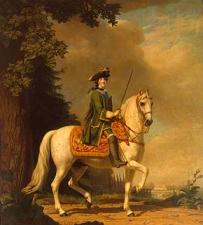 Pope Vigilius (died 555), whose pontificate lasted from 537 to 555, schemed as a deacon to become pope, only to suffer more pains for his ambitions than personal rewards. His pontificate was almost entirely dedicated to resolving a dispute with the Emperor Justinian of Constantinople over a question of Church dogma.

The argument between the pope and the emperor concerned certain writings that had been endorsed by the Council of Chalcedon in the fifth century. A sect of Christians known as the Monophysites objected to these writings. The Monophysites, who were numerous in the eastern part of the Roman empire, had the support of the emperor, who wished to see them brought into the Church.

Vigilius spent the last eight years of his life as a house prisoner of Justinian in Constantinople because of his refusal to condemn the disputed writings. Although Vigilius eventually agreed to censure the writings, he also attempted to reconcile his condemnation with the decisions made at the Council of Chalcedon. With the emperor satisfied, Vigilius was allowed to depart from Constantinople. He died shortly thereafter en route to Rome.

The Council of Chalcedon, which first convened in 451, endorsed several writings that seemed to suggest that Jesus Christ had two distinct natures, one human and one divine, with the two natures united in one person. This idea had been advanced by the Patriarch Nestorius in the fifth century. The writings seemed to be given legitimacy in 519, when the Emperor Justin I enforced the Chalcedonian definition of faith.

By the sixth century, the Monophysites, who held that Jesus had a single divine nature, and not two as held by the Nestorians, constituted a large Christian sect in the eastern half of the Roman empire. Unable to reconcile their belief with the rulings of the Council of Chalcedon, the Monophysites remained outside the Church.

In 544, hoping to reconcile the Monophysites to the Church, the Emperor Justinian issued an edict that condemned Nestorian writings endorsed by the Council of Chalcedon on the grounds that they contained unorthodox ideas. This edict, known as the Three Chapters, was a list of condemnations of the writings of three authors: Theodore of Mopsuestia, Theodoret, and Ibas. Since the Council of Chalcedon had already cleared these authors of any heresy, Justinian's edict was interpreted as a slight to the council and an encouragement to the Monophysites.

The edict confused many members of the Church because parts of the condemned writings were in fact considered orthodox. The Second Council of Constantinople in 553 would also condemn the writings but would uphold the Chalcedonian canons. The Nestorian interpretation of Christ's dual nature was promulgated outside the Roman Empire in the sixth century by missionaries in Arabia, China, and India. By the 14th Century, however, the idea had begun to disappear.

Pope Vigilius, who reigned as pope from 537 to 555, was descended from a Roman family of distinction. Vigilius's father, Johannes, had received the title of consul from the emperor, and the pope's brother, Repartus, was a Roman senator.

In 531, Vigilius was made a deacon of the Church. That year, a decree was issued allowing the pope to select his successor. Pope Boniface II (530-532) selected Vigilius to succeed him. But the clergy at St. Peter's opposed the idea. Boniface retracted his choice and destroyed the decree that allowed him to name a successor.

Boniface's eventual successor, Pope Agapetus I (535-536), made Vigilius a papal representative to Constantinople. There, the actress, theologian, and empress Theodora attempted to enlist Vigilius's help in gaining support for the Monophysites, including the Monophysite Patriarch Anthimus who had been deposed by Agapetus, in exchange for her help in making Vigilius pope and reportedly some seven hundred pounds of gold. Vigilius is said to have agreed to intervene on behalf of the Monophysites.

Following the death of Agapetus in April 536, Vigilius returned to Rome with letters from the Court of Constantinople and the money the empress had given him. But by then Silverius had already been made pope, with the help of the King of the Goths. A short time later, the Byzantine commander Belisarius stationed troops in Rome, which was facing a siege by the Goths.

The Empress Theodora wrote to Belisarius, asking him to pressure Silverius into restoring Anthimus as patriarch of Constantinople. Belisarius summoned Silverius to his headquarters and falsely accused him of scheming to help the Goths gain entry to Rome. The Byzantine commander demanded that Silverius reinstate Anthimus and lend his support to the Monophysites. Following Silverius' refusal, the pope was seized and officially deposed.

Under pressure from Belisarius, Vigilius was elevated to pope, being consecrated and enthroned on March 29, 537. Meanwhile the falsely maligned Silverius was kept in Vigilius's custody, where he soon died from the harsh treatment he received.

With the enthronement of a pope sympathetic to the Monophysite cause, all should have been well between Rome and Constantinople. But the Empress Theodora soon discovered that Vigilius was just as much opposed to the Monophysites as his predecessor Agapetus had been. Although a letter that has been attributed to Vigilius expresses the pope's sympathies for the Monophysites, some feel it is a forgery. In any case, Vigilius did not restore Anthimus to his former position as patriarch.

In 540, Vigilius wrote two letters to Constantinople outlining his position on Monophysitism, one addressed to the Emperor Justinian and the other to the Patriarch Menas. In them, Vigilius supported the rulings of the Council of Chalcedon and approved the deposition of Anthimus.

Other letters from the first years of Vigilius's reign have survived that shed further light on his pontificate. In March 538, for example, he wrote to the Bishop of Arles about the Austrasian King Theodobert's marriage to his brother's widow. Also in 538, he sent a letter to the Bishop of Braga about Church discipline.

Meanwhile, fundamental disagreements over Church dogma were developing with Constantinople. In 543, the Emperor Justinian published a decree that condemned the heresies of Origen and sent copies to the patriarchs and to Vigilius. In an attempt to refocus Justinian's interventions, the Bishop of Caesarea pointed out that condemnation of Nestorianism would make it easier to bring the Monophysites into the Church.

Justinian had wanted to placate the Monophysites. But he also had a preoccupation with questions of dogma. After he was told that a condemnation of three fifth century ecclesiastics who had exhibited Nestorian tendencies—but had been endorsed by the Council of Chalcedon—would placate the Monophysites, Justinian issued an edict toward that end. Vigilius refused to accept Justinian's edict. In response, the emperor called the pope to Constantinople to resolve the matter.

Vigilius was celebrating the feast of St. Cecilia when he was called away from the service and ordered by an imperial official to depart at once for Constantinople. The pope was taken to a ship. Meanwhile, the Goths under Totila were laying siege to Rome, causing tremendous misery to the populace. As the ship taking Vigilius to the eastern capital departed, stones were thrown at it and the pope cursed. The ship reportedly left on November 22, 545, and arrived in Constantinople around the end of that year. Although Vigilius sent ships laden with grain back to Rome, they were apparently captured en route.

In Constantinople, Vigilius tried to persuade Justinian to provide assistance to the Romans and Italians under siege by the Goths, but Justinian was preoccupied with his edict. Especially in the West, the Three Chapters had raised opposition because they seemed to condemn men who had long ago died in good standing with the Church and because the condemnation was seen as an insult to the Council of Chalcedon. It was also felt that the emperor had no business making Church doctrine. Nevertheless, there was nothing unorthodox about the Three Chapters.

Justinian pressured Vigilius into supporting the edict. Caught between the emperor's demands that he support the Three Chapters, and the western Church's insistence that he reject them, Vigilius wavered and then initially agreed to support Justinian's edict.

Facing the opposition of his own retinue of western bishops, Vigilius next retracted his support for the edict, prompting Justinian to make him a house prisoner. After Vigilius escaped, fleeing from a window by a suspended rope, the emperor persuaded him to return by proposing a general council.

The Council of Constantinople

On May 14, 553, Vigilius issued his Constitution, which rejected 60 propositions of Theodore of Mopsuestia. Vigilius's Constitution also refused to condemn either Theodoret or Ibas because the testimony of the Council of Chalcedon had removed all suspicion of heresy against them. But on June 2, 553, the council once again condemned the disputed writings, siding with Justinian.

After thinking over the matter for six months, Vigilius decided that ending the persecutions of the emperor against his clergy would be well worth the cost of his endorsement of the council. So in December 553, after a residence of eight years in Constantinople, Vigilius reached an understanding with the emperor in which Vigilius agreed to censure the disputed writings while endorsing the canons of the Council of Chalcedon. Once again, his decision brought criticism in the west.

Justinian allowed Vigilius to depart for Rome with the promise that the pope would share temporal power there. Vigilius began his journey home in 555. But before reaching Rome, he died en route at Syracuse on June 7, 555, leaving a troubled legacy to his successors. His body was taken to Rome and buried in the Basilica of Sylvester.

Eutyches , The Byzantine monk Eutyches (ca. 380-455) preached the doctrine of Monophysitism, the belief that Christ had only a divine nature. His teachings were… Clement Vii , Elected pope of the Catholic Church in times of religious and political turmoil, the reign of Clement VII (1478-1534) was marked by a brutal attack o… Photius , Photius (fō´shəs), c.820–892?, Greek churchman and theologian, patriarch of Constantinople, b. Constantinople. He came of a noble Byzantine family. P… Saint Sylvester I , Very little is known about the early life of Pope Sylvester I (died 335), and for centuries his pontificate was shrouded in legend. The fact that the… Paul Vi , Paul VI Paul VI Paul VI (1897-1978) became pope of the Roman Catholic Church in 1963. He reigned during a period of great change and ferment in the C… Nicholas V , Pope from 1447 until 1455 who resolved the long-standing conflict between the conciliar movement and the Papacy and whose efforts to restore classica…