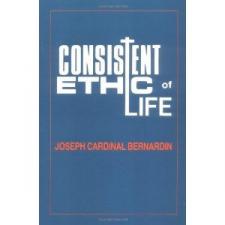 Joseph Cardinal Bernardin (1928-1996) was a major leader in the U.S.-based Catholic Church during the modern progressive era.

Joseph Cardinal Bernardin became the symbol, even if unknowingly, of the U.S. Catholic Church's struggle with modernity. A quiet, devout man, he rose in the ranks of the church in the 1980s to lead American Catholicism into a more progressive era. He was an instrumental part of the creation of the National Conference of Catholic Bishops' pastoral letters on nuclear weapons, the economy, and AIDS. Bernardin's positions ranged between innovation and traditional Vatican teachings; yet, with his skills of negotiation he was almost always able to forge a compromise. It was his ability to listen clearly as well as speak strongly that separated his vision and actions from other officials in the Catholic Church hierarchy. Bernardin's modesty did not allow him to view himself as a pure instrument of change, but only as a symbol doing the work that was required of him. As he once said in an interview with Time magazine, "There is a real spiritual hunger on the part of the people. They are not reaching out to me. They are reaching out to the Lord. Perhaps there is a personal dimension, but I am just a symbol."

Born on 2 April 1928 in Columbia, South Carolina, to a family of Italian immigrants, Bernardin was the only Catholic boy on his block. These early experiences helped him acquire a great understanding and tolerance for other religions and opposite points of view. Initially intent on choosing a career in medicine, he attended the University of South Carolina for a year. Later, after deciding to enter the priesthood, he graduated with a degree in philosophy from St. Mary's Seminary in Baltimore in 1948. He received a master's in education from Catholic University in Washington, D.C., and was ordained a priest in 1952. Once ordained, Bernardin's skills shined, as he soon climbed the hierarchical ladder, moving to Atlanta and becoming the youngest bishop in the country by 1966. By 1968 Bernardin made Washington, D.C., his home as he became the general secretary of the National Conference of Catholic Bishops (NCCB) and its social action agency, the United States Catholic Conference. In 1972 he was named the archbishop of Cincinnati, Ohio, and was elected president of the NCCB in 1974, serving in that role until 1977. Bernardin brought to every position a strong confidence and a progressive agenda toward church policies. In 1982 Bernardin was named archbishop of Chicago, the largest archdiocese in the nation. This new foothold of power placed Bernardin in a prominent location to express his social activism.

In February 1983 Bernardin was elevated to the Sacred College of Cardinals by Pope John Paul II. Bernardin succeeded the late John Cardinal Cody, who in his last days had been plagued by financial scandals and dissent by priests and followers who believed him to be uncaring and rigid. With Bernardin now in power, Chicago's more than 2.4 million Catholic's felt they had a leader who would listen. Bernardin's outspoken position on social issues was evident in 1982 when the first draft of the NCCB's antinuclear weapons letter was issued—"The Challenge of Peace." The letter questioned the morality of possessing nuclear weapons, let alone the use of such destructive forces. After much debate, discussion, and modifications, the pastoral letter was issued 3 May 1983. Bernardin's determination did not stop there; he urged his fellow bishops, both liberal and conservative, to fight for reductions in the amounts of government money spent on the military in general, believing it wrong to waste resources on weapons while urban neighborhoods fell to ruin. In 1984 the NCCB examined the United States' economic structure. Once again Bernardin led the charge for the Catholic Church to take a moral stand, and the resulting pastoral letter, "Economic Justice for All," cited systematic flaws. Although seen as too much of an activist by some officials and church laity, Bernardin continued to work within the framework of the Catholic Church, always seeking biblical and Vatican confirmation for all maneuvers. In 1987 he witnessed the scourge of the AIDS virus sweeping the nation and felt it was time for the church to react officially. The issue of AIDS was complex for the Catholic Church, as it touched upon several issues— condoms, homosexuality, sexual activity—that the church preferred not to deal with publicly. Bernardin, acknowledging this, pushed for the Catholic Church to allow teaching the use of condoms as a prevention of future transmission of the disease. Opposition was severe as some bishops and cardinals felt any change in the official stance would appear as if the church were condoning sexual behavior outside of marriage. Bernardin saw silence and a lack of information as a sinful act on the church's part. In the end the document was adopted and discussion of the use of condoms was permitted on a limited basis.

Joseph Cardinal Bernardin was a visionary in the Catholic Church, always looking toward the future but never neglecting the Church's rich past. His strong relationships with the laity and to John Paul II in the early 1970s before his elevation to pope served Bernardin well during difficult periods in his career. His open style created a level of comfort not known to many elder Catholics, as he symbolized the pinnacle of post-Vatican II Catholicism. Unafraid to challenge the status quo, he became a star of the American Catholic Church. In 1995 Bernardin was diagnosed with pancreatic cancer. After over a year of battling the illness, he died on November 14, 1996.

Patriarchate , PATRIARCHATE Part I: Historical Developments A patriarchate (Gr. πατριαρχεíα, Lat. Patriarchatus ) is a patriarch's office, see, reign, or, most ofte… Augustine Tolton , Tolton, Augustine 1854-1897 Priest Former slave Augustine Tolton overcame daunting obstacles to become the second African-American to be ordained a p… Secularization , Secularization is a process in which religious belief and practice declines, people become less oriented toward the supernatural, and churches no lon… Andrew M. Greeley , Andrew M. Greeley An American Catholic priest, Andrew M. Greeley (born 1928) wrote sociological studies of American religion and of ethnicity, popula… Old Catholics , Old Catholics, Christian denomination established by German Catholics who separated themselves from the Roman Catholic Church when they rejected (187… Anglo-catholicism , Anglo-Catholics Since the oxford movement, this term has been commonly used to designate the Catholic wing of the high church Movement within the Ang…