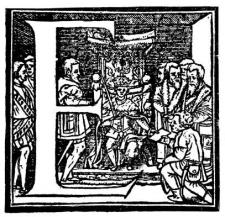 oxford
views updated
Spottiswood, John (1565–1639). Archbishop. Spottiswood was born in 1565, and, though originally a strict presbyterian, his Erastianism led him to embrace James VI and I's policy of appointing bishops to oversee the Scottish church. He was appointed archbishop of Glasgow in 1603, and, after the General Assembly in 1610 effectively abolished presbytery by agreeing that ordination and discipline should be the prerogative of the bishops, he obtained episcopal consecration in England. In 1615 he was translated to St Andrews, which at that date included Edinburgh. Under Charles I, Spottiswood did his best to temper the king's zeal and the heavy-handedness of Archbishop Laud, and was present in St Giles in 1637 when riot ensued over attempts to impose a new liturgy. He left Scotland in 1638, and died in 1639.

Laodicea , Nine different cities were called Laodicea in antiquity; those in Phrygia, in Pisidia, and on the northern seacoast of Syria are the more significant… William Morgan , Morgan, William (c.1545–1604). Bishop and Welsh scholar. Morgan was born in Cardiganshire and sent to St John's College, Cambridge. In 1575 he was ma… Donatus , Donatus Donatus (died ca. 355) was the schismatic bishop of Carthage during the first decades of the Donatist movement. Little is known of Donatus be… Isabel Bishop , Isabel Bishop Isabel Bishop Isabel Bishop (1902-1988) was a painter and printmaker who depicted life in Union Square, New York, from the 1930s throug… George Abbot , Abbot, George (1562–1633). Bishop of Lichfield (1609), London (1610), and archbishop of Canterbury (1611–33). Born in Guildford, Abbot was educated t… Andrew Melville , MELVILLE, ANDREW Scottish Protestant divine; b. Baldovy, Aug. 1, 1545;d. Sedan, 1622. Melville was educated at Montrose grammar school and at the Uni…