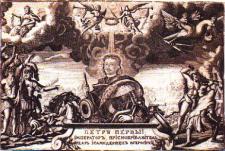 The Russian chemist and physicist Mikhail Vasilevich Lomonosov (1711-1765) proposed advanced scientific theories, but the diversity of his activities and interests hindered him from gaining widespread recognition.

Mikhail Lomonosov was born on Nov. 8, 1711, in the village of Denisovka. There being few opportunities for education in his native village, he ran away at the age of 19 to Moscow, where he entered a theological seminary and began to study for the priesthood.

Having displayed outstanding abilities as a scholar, young Lomonosov was chosen in 1735 to attend lectures given at the Academy of Sciences in St. Petersburg. This experience changed the whole direction of his career. The St. Petersburg Academy was at this time promoting a series of studies on the material resources of Siberia for which it needed trained chemists and metallurgists. From 1736 to 1741 Lomonosov studied these subjects in Germany, first at the University of Marburg, where he gained a thorough grounding in the basic sciences, and later at the famous mining academy at Freiburg.

On his return to Russia, Lomonosov became a member of the St. Petersburg Academy, and the remainder of his life was devoted almost exclusively to its affairs. He soon emerged as the contentious leader of the group of native Russian scientists in the academy opposed to the clique of foreign members, largely German, who had been imported into its membership at its foundation to stimulate Russian science. In 1745 he was appointed professor of chemistry at the academy, where he built a chemical laboratory for instruction and research. Here he gave one of the earliest courses in practical instruction in chemistry.

Although Lomonosov published much on various aspects of physics and chemistry, his works were mainly in the form of dissertations with a limited circulation. His many activities seem to have prevented him from completing many of his projects, and much of his original work was never published.

Lomonosov's physical and chemical work was characterized by its emphasis on the use of atomic and molecular modes of explanation. In a century when most scientists regarded heat as material substance, he argued that heat was in fact a form of motion—the result of the motion of the molecules which constitute matter. His essentially physical approach to chemistry led him to place great emphasis on quantitative measurements. In this he was certainly ahead of his time, although the claims that he anticipated Antoine Laurent Lavoisier in stressing the conservation of mass in chemical reactions and recognizing the chemical role of air in combustion are certainly exaggerated.

Lomonosov's other scientific interests were electricity, light, mineralogy, meteorology, and astronomy. He observed the transit of Venus in 1761 and concluded that Venus had an atmosphere "similar to, or perhaps greater than that of the earth." He also made significant contributions to the philological study of the Russian language, including the development of a scientific vocabulary, and wrote a controversial history of Russia.

Although Lomonosov was a man of immense talent, his creative energies were somewhat thwarted by his domineering nature and quarrelsome disposition. He died from influenza in St. Petersburg on April 4, 1765.

A highly laudatory biography is by the famous Russian chemist Boris N. Menshutkin, Russia's Lomonosov: Chemist, Courtier, Physicist, Poet (trans. 1952). See also Mikhail Vasilyevich Lomonosov on the Corpuscular Theory, translated with an introduction by Henry M. Leicester (1970). The literary and cultural background of Lomonosov's work is given in Hans Rogger, National Consciousness in Eighteenth-century Russia (1960). Scientific aspects are discussed in Alexander Vucinich, Science in Russian Culture: A History to 1860 (1963). □