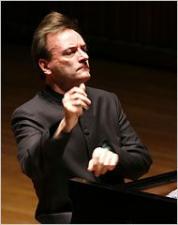 The world of classical music has no shortage of gifted and passionate pianists. Alone among their number, however, is a musician who is also accessible, contemporary, and—confirmed by the MacArthur Foundation—a genius. Stephen Hough, recognized as a leading interpreter of nineteenth-century composers such as Sergei Rachmaninoff, has a spontaneous keyboard style and a unique interpretive sense. His virtuosity, along with the mix of the classical and modern music in his repertoire, has earned the praise of critics and audiences alike.

Born in Cheshire, England, Hough (pronounced “Huff”) attended Manchester’s Northern College of Music before transferring to the famed Juilliard School in New York City. He has split his time between London and New York since then. Hough first appeared on the music scene in 1983, when he won the prestigious Naumburg International Piano Competition, a victory he parlayed into bookings with such conductors as Claudio Abbado and Michael Tilson Thomas. In recent North American seasons he has performed with the symphonies of Cleveland, Philadelphia, Boston, Los Angeles, Minnesota, Dallas, Toronto, Montreal, Detroit, and Indianapolis. Internationally, he has appeared in Israel, Austria, Japan, and other nations.

Typical of the accolades that accompany a Hough concert is this comment from Star-Telegram critic Wayne Lee Gay: “In Hough’s performance… the Rachmaninoff Rhapsody showcased the pianist’s incredible technique, which includes the ability to race at superhuman speeds and to hypnotize the audience with a silken pianissimo.” Cleveland Plain Dealer writer Donald Rosenberg also heard the Rachmaninoff concerto, which is a variation on a theme by Niccolo Paganini, and said that in Hough’s hands the music “received dynamic handling…. Along with exceptional agility, Hough invested the piece with enormous contrasts, capturing both the turbulence and lyrical wonder that make the piece such a magnificent tribute to Paganini.”

In a 1996 New York Times review, Alan Kozinn found Hough in concert “aggressive but fresh,” noting that his playing of a Schubert piece saw the performer “stretching tempos and dynamics to their extremes and hovering over tensions within the music as if he were examining them microscopically” in a way that was “sometimes mannered and sometimes puzzling.” Still, the musician is “an artist, not a piano-pounder,” noted Dallas Morning News reviewer Olin Chism. “Though he is fully capable of the required fireworks, just as impressive—perhaps more so—is his subtle handling of [Rachmaninoff’s] many moments of repose.” A performance of Piano Concerto no. 5 (“The Egyptian”) by Camille Saint-Saens drew this from David Stabler of The Oregonian: “With soloist Stephen Hough at the keyboard, the music spun an ‘Arabian tale’ of sinuous melodies and what 19th century composers thought of as exotic Middle Eastern harmonies.”

For all his acclaim, however, Hough “is not your ordinary piano man,” according to Time’s Terry Teachout. “Uninterested in going the safe star-soloist route, he revels in playing the music he loves best in smaller cities and with regional orchestras.” Indeed, Hough’s schedule between 1999 and 2001 included stops not only in New York City, Philadelphia, and Chicago but also Des Moines, Syracuse, and Cleveland. Mixing reliable concertos by Rachmaninoff and Saint-Saens with both popular music and new compositions, Hough keeps his performances diverse. In March of 2001, for example, he premiered Lowell Lieberman’s Second Concerto at Carnegie Hall. Teachout, who covered the event for the Washington Post, described the composition as “a brainy barn-burner of a super-showpiece,” and said that Hough approached the robust piece “with all fingers flying—if I hadn’t looked, I would have sworn he had 12 or 13.” A piano interpretation of “My Favorite Things” from The Sound of Music is also in Hough’s repertoire. “He is, in short, a totally unsnobby egghead who just happens to have a luminous, envelopingly warm tone and enough technique for two ordinary pianists,” Teachout continued in Time.

Hough’s 2001 American tour was interrupted by the terrorist attacks of September 11. He had been scheduled to headline the Rachmaninoff Revisited Festival at Lincoln Center that month, a concert that was canceled in light of the tragic events. Just weeks later, though, he would receive what Teachout called “a jaw-dropping phone call” from the MacArthur Foundation: Hough had been selected to receive a MacArthur Fellowship, the

Classical pianist touring in the U.S., Europe, and Asia and performing as a frequent guest at international festivals including Aspen, Ravinia, Tanglewood, Mostly Mozart, and the Proms; chamber musician with Cleveland, Emerson, and Juilliard Quartets; arranger and composer for albums including Piano Music and New York Variations; recording artist with Hyperion; music transcriber.

so-called “genius grant” of $500, 000. Hough was the first classical performer chosen for the award (previous recipients represented the worlds of jazz, dance, and theatre). The MacArthur Foundation cited Hough as someone who “delights equally in offering probing interpretations of canonical piano compositions … and showcasing the new music of contemporary composers.” Winning the fellowship “was a complete surprise and a total shock,” Hough told Teachout in the Time interview.

Though best known as an interpreter, Hough also enjoys an emerging reputation as a composer and arranger. As a collaborator he has also worked with such chamber musicians as violinists Pamela Frank and Joshua Bell, and cellist Steven Isserlis. Hough records with Hyperion, England’s top producer of classical music, and by 1996 had earned Gramophone’s Record of the Year honors for his album of concertos by Sauer and Scharwenka, recorded with the City of Birmingham Symphony. Hough “leaps through every blazing hoop with a nonchalance and know-how that recall a bygone age of imperial gifts,” said a Gramophone reviewer. The same magazine ran a review of Hough’s 1999 album of Schubert piano sonatas, specifically no. 11 in C, no. 14 in A Minor, and no. 21 in B-flat. In this assessment, a contributor wrote that in the A minor sonata, “perhaps Schubert’s most depressive instrumental work,” Hough “distills a immense weight of suffering from the pervasive two-note motif that dominates the movement like some massive, Wagnerian pendulum.”

A part-time New Yorker, Hough released his New York Variations in 1998. This musical tour of Manhattan includes Piano Variations of 1930 by Aaron Copland. David Mermelstein on the New York Times found that the native Briton handles such material “with his customary good taste,” adding that Hough’s variations “offer playful athleticism as well as more earnest musical strivings.” New York Variations earned a Grammy Award nomination and was named Time’s Best Classical CD of the Year in 1998.

As Hough revealed in the Time interview, he converted to the Roman Catholic religion in his youth, and regards his faith as a guiding force in his life. “Specifically, it puts things into perspective,” he said. “Success, failure, the opinions of others and all of the madness of life.”

William Schuman , Schuman, William Composer, educator, administrator William Schuman had an ordinary childhood in New York City, with little to suggest that he would b… Musicology , Musicology is the scholarly study of music, where music can be considered either as a fixed object of investigation or as a process whose participant… Artur Schnabel , Artur Schnabel Austrian-born pianist Artur Schnabel (1882–1951) was the first artist to record all of Beethoven's piano sonatas. Only modestly gifted… Yanni , Yanni Composer, keyboardist A lot of people think they’ve never heard Yanni’s music. Yet in the early 1990s, the keyboardist’s work was heard by more… Brian Eno , Brian Eno Composer, producer, keyboardist, singer Joined Roxy Music Convalescence Spawned Ambient Music Bush of Ghosts Presaged Worldbeat Craze Fruit… Morton Gould , Gould, Morton Composer, conductor Despite receiving no formal education in orchestra tion or conducting, Morton Gould became one of the most prominen…