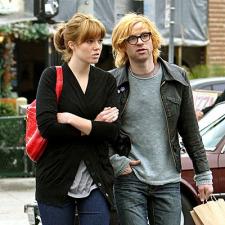 Born on the same day as country-rock legend Gram Parsons, Ryan Adams has been the darling of the alternative country scene since the mid-1990s. “Ryan Adams is quite possibly the single musician most worth keeping your eyes on right now,” wrote Alan Light in Spin in November of 2001. Although he began his musical career playing punk rock in the Patty Duke Syndrome, Adams left to form Whiskeytown in 1994 and explore roots music. Beloved by fans for their rowdy ways and unpredictability, Whiskeytown was viewed, according to David Goodman in Modem Twang, as “the second coming of Uncle Tupelo.” When the band broke up in 1999, Adams went into a Nashville studio and recorded Heartbreaker, an album Mark Deming described in All Music Guide as “loose, open, and heartfelt.” A warm critical reception to Heartbreaker announced that a new artistic voice had arrived. “Adams is one of those rare singer-songwriters who can wear his heart on his sleeve,” noted Glenn Gamboa in Newsday, “and still dare someone to break it. Again.”

Born on November 5, 1974, in Jacksonville, North Carolina, Adams never planned to become a musician. He jotted down his feelings in journals, read books by Henry Miller and Jack Kerouac, and planned to become a journalist or writer. “I started writing as soon as I could type,” he told Mark Binelli in Rolling Stone. Adams was introduced to the writings of Emily Dickinson by his mother, and enjoyed reading Southern writers like Eudora Welty and William Faulkner. After his parents divorced, a then nine-year-old Adams spent more time with his grandmother, Geemaw Dedmond. “Music was one of the things that happened on the way, by accident,” Adams told Elton John in Interview. Initially he listened to Prince and Black Sabbath, but also enjoyed punk bands like Husker Du and Black Flag. At 15, Adams dropped out of school, worked at a series of menial jobs, and formed the Patty Duke Syndrome.

After five years with the Patty Duke Syndrome, Adams grew tired of the punk scene and began listening to bluegrass and country music performed by the Stanley Brothers, Willie Nelson, and Hank Williams. He met drummer Skillet Gilmore in Raleigh, North Carolina, and together they formed Whiskeytown with children: Adam, Silas, Thomas. Education :/vocalist Phil Wandscher. From the beginning, the band was a potent mixture of talent and conflicting personalities. “Whiskeytown was quickly earning a reputation for their utterly volatile nature as a live band,” explained Peter Blackstock on the No Depression website. “Some nights were transcendent, some were disasters; some were a little bit of both, scattered amidst the mayhem and destruction.” The band recorded a seven-inch EP for Mood Food in the spring of 1995 and followed it up with their well-received debut, Faithless Street.

Although Whiskeytown expressed no interest in becoming the “next big thing,” their performance at the

1996 South by South West (SXSW) festival became the turning point in the band’s career. A horde of record label representatives descended on band members following their show, and a bidding war ensued to sign the group. “After all was said and done,” Adams told Austin Chronicle interviewer Andy Langer, “the labels wanting to sign us was probably more detrimental than it was positive.” The group signed with Geffen subsidiary Outpost Records, but with its newfound success, the band quickly began to implode. Internal dissension led to messy recording sessions, even though the group’s Stranger’s Almanac became an instant alternative-country classic in 1997. Despite continued strife among band members, the group continued touring and recording until corporate reorganizations left them without a record company. “We finished the last record and the tour fizzled out,” Adams told Allison Stewart in the Boston Phoenix, “and if someone wasn’t quitting or being fired, they were … going to drug rehab or having nervous breakdowns.” After multiple personnel changes, Whiskeytown called it quits in 1999. The band’s final recording sessions remained in the vault until the release of Pneumonia in 2001.

After the demise of Whiskeytown, Adams embarked on his solo career, traveling to Nashville to record Heart-breaker with the help of luminaries Emmylou Harris, Gillian Welch, and David Rawlings. “There were a bunch of reasons I went to Nashville,” Adams explained to Scott Frampton of Country Music Journal, “for professional and romantic rehabilitation.” Centered on the end of a relationship, Heartbreaker was described by Binelli as “one of the great breakup records of recent memory.” “There’s a lot of immediacy in that record,” Adams told Rob Kemp of Sonicnet online, “and a lot of things I needed to say.” Recorded in eleven days, the stripped-down production and folk sound mirrored Adams’s downbeat material. As Deming noted, “the strength of the material and the performances suggest Adams is finally gaining some muchneeded maturity, and his music is all the better for it.” While Heartbreaker received no radio play and only sold modestly, the glowing critical reception accorded it bolstered Adams’s reputation.

In 2001 Adams signed with Lost Highway Records and began working on a multitude of new projects. He recorded an ambitious double CD titled Gold, but ultimately cut eight songs for its official release. Gold split critical opinion. Scott Frampton, writing in Esquire, dubbed Gold “the record that would save country music if only it would listen,” while Peter Blackstock of No Depression called the album “pyrite.” Much of the critical confusion regarding the album has resulted from Adams’s tendency to jump from one musical genre to another. Whereas Heartbreaker found the musician squarely in the country-folk mold, Gold brings to mind mid-1970s classic rock. To confuse reaction to Gold even further, Whiskeytown’s final disc, Pneumonia, was released almost simultaneously and many mistakenly interpreted it as the band’s—and Adams’s—swan song. Meanwhile, during interviews promoting Gold, Adams was talking about upcoming projects and musical plans, including cutting a hard rock album with his band, the Pink Hearts.

Despite the confusion of some critics in response to his musical direction, Adams’s reputation as a songwriter continues to grow. He writes and records continually, guaranteeing a steady supply of new material for his growing fan base. “His prodigious work ethic would get pretty annoying, actually,” wrote Light, “if the songs weren’t so good and getting better every day.” Recalling the menial jobs he worked before he earned money as a musician, Adams told Elton John in Interview, “Now I’m still a ditch digger, but it’s different. It’s kind of like as songwriters, we’re doing a job for the rest of the world who are not obsessed with art.”

Ryan Adams, the solo singer/songwriter, combines the cocky cacophony of garage rock with the sweet and sad aspects of country music. Adams started out as the lead singer and songwriter of Whiskeytown, a band that rode the wave of alternative-country in the mid- to late 1990s. Formed in 1994, the group officially broke up around 2000, shortly before the release of Adams's debut album Heartbreaker (2000). In just two years, the prolific Adams released three albums.

For someone who dropped out of high school after tenth grade, Adams has proved to be a success. Guest appearances by country singers Kim Richey and Emmylou Harris make Heartbreaker no ordinary debut. It is an introspective tearjerker, an earthy, spare production, with Adams's cracked, worldly voice holding it together, while the pianos, banjos, harmonicas, and acoustic guitar play in the background. First-person songs examine failed romantic relationships. A sorrowful, wailing harmonica accompanies cry-in-your-beer tunes such as "Sweet Carolina," a duet with Emmylou Harris, and the desperate, waltzy ballad "Why Do You Leave?"

Adams quickly signed to Lost Highway, the country-rock imprint of Universal Music Group. Gold (2001), which Adams wrote while living in Los Angeles, brought him some attention. The video for "New York, New York," the album's first track, showed the downtown skyline of Manhattan and was recorded just a few days before the terrorist attacks of September 11, 2001. It became an unintended anthem. Adams called "New York, New York" his love letter to the city, but did not mean it to be patriotic. In the chorus he sings, "Love don't play any games with me like she did before / The world won't wait so I better shake / That thing right through the door / Hell I still love you though, New York." With its Hammond organ, chugging beat, and a guitar lick worthy of the Rolling Stones, "New York, New York" is Gold 's most inspirational moment. Gold 's other fifteen tracks are mostly mid-tempo musings on city life, relationships, and late nights at bars. "La Cienega Just Smiled" is lovely. "When the Stars Go Blue" was covered by Bono of U2 and the Corrs shortly after the album's release.

With a chameleonlike voice, Adams conjures the raw grit and rebellious spirit of Steve Earle one minute, and the sweetness and desperation of a folksinger the next. He has the disheveled, devil-may-care demeanor of a true punk rocker and the heart of a die-hard romantic troubadour unafraid to wear his heart on his sleeve. As a musician, his instincts are more varied than any single genre could convey.

Oleta Adams , Singer Oleta Adams adopted a motto of perseverance from the very beginning of her career as a singer. After more than a decade of playing piano bars… John Couch Adams , Adams, John Couch Adams, John Couch astronomy, mathematics. John Couch Adams was born at Lidcot farm, seven miles from Launceston. He was the eldest… Henry Adams , The American historian and author Henry Brooks Adams (1838-1918) lived in an era of remarkable change and recorded the implications of the period wit… Yolanda Adams , Adams, Yolanda 1961– “I’ve always believed you should appeal to everybody,” Yolanda Adams once told Metro magazine interviewer Nicky Baxter. One of t… Charles Francis Adams (economist) , Railroad commissioner and executive An Adams and the Railroads. Charles Francis Adams Jr. was born in patrician circumstances, into a line that stret… Adam , Adam In the Old Testament, first man, progenitor of mankind, created from dust by God in his own image. He and his wife Eve were cast out of the Gard…