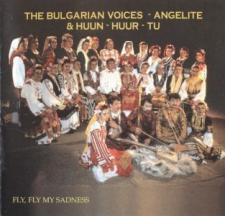 Among the most unusual group of performers touring on the world music circuit has been Huun-Huur-Tu, the Throat Singers of Tuva. Tuva is a remote grassland region in the center of the Asian continent, now a semi-autonomous division of Russia. It has its own language, Tuvan (in which the group's name is spelled xün x¨rtü), and its economy has traditionally been based on sheep herding—a necessity during Siberian winters in which the average January temperature hovers in the range of 25 degrees below zero Fahrenheit. In this harsh environment has grown an art practiced almost nowhere else on earth: the members of Huun-Huur-Tu and other Tuvan throat singers can produce more than one pitch simultaneously while singing. No one in the West is entirely sure how they do it, but most Tuvans learn the skill as children. It involves singing one tone normally while amplifying the tone's harmonics—the quieter, higher tones that are part of any sounding pitch (heard, for example, when the lip of a bottle is blown hard)—with manipulations of the larynx, lips, tongue, jaw, and soft palate. Huun-Huur-Tu's members can even produce short melodies in one "voice" along with single notes.

Western researchers began to discover Tuvan throat singing (xöömei) in the 1980s. A Dartmouth College ethnomusicologist brought a Tuvan singer to perform at the Smithsonian Folklife Festival in 1987, and world music enthusiast Ralph Leighton had the idea of bringing three Tuvan singers to ride horses in the Rose Bowl parade in 1992. The three Tuvans who made the trip decided to form a group to preserve their traditional art, which was threatened by the centralization of culture practiced in the Soviet Union. They called the group Kungurtuk, but after adding a fourth member they changed the name to Huun-Huur-Tu, a Tuvan term describing the way the sun's rays may seem to divide at sunrise or sunset. The division of the sun's rays seemed similar to the way a single voice divides into parts in throat singing.

The original members of the group were Kaigal-ool Khovalyg, known as one of the best throat singers in Tuva, brothers Alexander and Sayan Bapa, and Albert Kuvezin. All were born in the early or middle 1960s, and while their lives were rooted in the rural Tuvan herding culture, they had all moved to the Tuvan capital of Kyzyl to study or work. Khovalyg was closest to the traditional Tuvan landscape, having worked as a shepherd until the age of 21. The members of the group spoke Tuvan and Russian, but little English, when they began touring the United States.

Despite culture and language barriers, Tuvan throat singing fascinated Americans who were lucky enough to hear Huun-Huur-Tu, a group that grew in number after Huun-Huur-Tu performed or recorded with such musicians as Frank Zappa, the Kronos Quartet, and Mickey Hart of the Grateful Dead rock group. Slide guitarist Ry Cooder used Huun-Huur-Tu's music in his soundtrack for the film Geronimo. The members of Huun-Huur-Tu had no problem with Cooder's conflation of Native American and Tuvan music, for Tuvans believe that Native Americans had ancestral roots in the Tuva region. In 1994 the Boston Globe named Huun-Huur-Tu's tour the top world music event of the year.

The fascination of Huun-Huur-Tu's music came not only from their throat-singing technique but also from the music's close connection with the rhythms of traditional Tuvan life. The texts of Huun-Huur-Tu's songs describe the stark Tuvan landscape or represent the sounds of birds, wind, water, or the stirrups of a horse. They originate with solitary sheepherders who sing songs of praise for their environment; they are singing to nature as well as singing about it. In the words of Ted Levin, as quoted on Huun-Huur-Tu's website, "Tuvans not only transform the sounds of the natural world into music through imitation; they also make sonic 'maps' of physical landscapes which may be expressed in texted songs, throat-singing, whistling, or other types of vocal production. For the Tuvans, one of the purposes of music seems to be to offer detailed and concrete descriptions of topography." Throat singing also has practical effects; it is said to calm herd animals and to attract wild animals during a hunt.

The stringed and percussion instruments that accompanied Huun-Huur-Tu were likewise traditional and closely related to the nomadic Tuvan lifestyle; one rattle was made from sheep knee bones enclosed in an inflated and hardened bull scrotum. The group made repeated tours of the United States and also performed in Europe, Japan, and (in 1999) Australia. Their first CD, Sixty Horses in My Herd, was released on the Shanachie label in 1993, and they released several other CDs in the late 1990s and early 2000s. The live CD Best of: Live appeared on Germany's Jaro label in 2001. That year they traveled across Russia, performing in the musically rich northwestern province of Karelia.

By that time, Huun-Huur-Tu had undergone changes. They had shared stages with traditional singers from around the planet and had begun to think about how Huun-Huur-Tu's music might change, both in order to incorporate aspects of the modern musical world and to collaborate with other traditional musicians. Albert Kuvezin left the group to form a progressive Tuvan rock band, Yat-Kha; he was replaced by Anatoli Kuular and then (in 2003) by Andrey Mongush. Alexander Bapa also departed in order to move to Moscow and focus on music production. He was replaced by Alexei Saryglar.

Huun-Huur-Tu toured with the Bulgarian women's choir Angelite and recorded with American banjoist Bela Fleck on the Outbound album of 2000. In 2003 their music was given electronic remix treatment on the album Spirits from Tuva. In turn, their music gained a cadre of young Western fans who styled themselves Tuva-heads. The more general art of throat singing also gained U.S. practitioners. Many of their concerts, however, have continued to feature traditional songs that seem as vast as the grassland landscape from which they came. Huun-Huur-Tu launched a new U.S. tour in early 2006.


Huun-Huur-Tu is a group of musicians who combine the ancient musical traditions of their Central Asian, southern Siberian Tuva peoples (who still labor as sheep and reindeer herders) with contemporary performance practices and selected electronic instruments.

A male quartet originally organized to preserve and highlight unique repertoire from a remote region, the members of what became Huun-Huur-Tu were discovered by a Boston-based ethnomusicologist, Ted Levin, on a field expedition in 1987 to an area which the Soviet government had formerly forbidden to tourists. The area is populated by some 150,000 people, mostly in rural areas. The musicians were working separately in state-run folkloric ensembles, and Levin helped bring them to the United States for the first time in 1993. Since then Huun-Huur-Tu has toured the United States, Europe, Japan, and Australia and has recorded five albums under its own name along with several collaborations with an array of musicians across genres and geographic boundaries, including Frank Zappa, Ry Cooder, the Chieftains, Johnny "Guitar" Watson, the Kronos Quartet, the Indian violinist L. Shankar, the Scottish-Canadian Niall MacAulay, Angelite, and the Bulgarian Women's Choir.

The members of Huun-Huur-Tu excel at the traditional solo practice of xoomei (throat-singing), in which two distinct pitches are produced, sustained and shaped simultaneously; some of their recordings capture them throat-singing while riding horses. They also employ instruments indigenous to their region of grasslands, forests, and mountain ranges. These instruments include the two-string igil, a "horsehead fiddle"; the bowed, three-string chanzy; the banjolike, plucked doshpuluur; the tungur frame drum; the khomuz jew's harp; the dazhaanning khavy, a rattle made of bull scrotum and sheep kneebones; the deer-horn amarga; dried horses' hooves used as clappers; and the birch-bark bird-whistle ediski.

Huun-Huur-Tu's lyrics recount stories, prayers, descriptions of personal relationships, and mythic incidents. The musicians imitate natural ambient sounds and the noises of animals, to cohere as sonic maps of physical landscapes; a primary purpose of Tuvan music seems to be to detail topography. The name "Huun-Huur-Tu" refers to the quality of light on open countryside at dawn and dusk. The band's spare, string-dominated arrangements suggest African-American blues as well as Eastern Asian folk forms; Huun-Huur-Tu has also explored the kinship of Tuvan and early Russian music (Moscow is approximately 2,500 miles west of Tuva).

The founding member Albert Kuvezin left Huun-Huur-Tu to establish the pop-oriented group Yat-Kha, and the founding percussionist Alexander Bapa departed for Moscow to concentrate on record production and music group management. Anatoli Kuular and Alexei Saryglar replaced them in 1993 and 1995, respectively, with no noticeable loss of virtuosity or authenticity.

Throat-singing is practiced by the Inuit of Alaska and Canada; the Tuvan vocalist Sainkho Namchylak has employed throat-singing in avant-garde improvisations with the Moscow Composers Orchestra. But Huun-Huur-Tu has succeeded like no other ensemble or individual in keeping an age-old vocal technique alive and adapting it to contemporary circumstances without diffusing its essence.