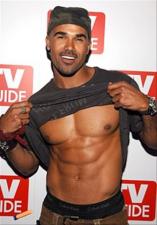 Over two million viewers a day tune into to watch Shemar Moore on the CBS daytime drama The Young and the Restless. Cast in 1994 to play a heartthrob photographer on the popular soap, Moore is a lanky, well-built former college athlete whose muscular physique has won him legions of devoted female fans. Magazines trumpet articles on the actor with such lines as” Is Shemar Moore the Finest Thing on TV?” What makes Moore even more appealing, however, is the unequivocal adoration he displays for the main woman in his life.” I might be on television, but she’s right there with me,” he said of his mother, Marilyn Moore, in a 1998 Ebony interview with Aldore Collier.” I couldn’t do this without her. I love her to death.”

The only child of an interracial marriage, Moore spent his formative years in Boston and northern California. Even more formative, however, were the pre-school years in the Persian Gulf sheikdom of Bahrain, next door to Saudi Arabia. His parents had been free spirits in the early 1970s—his name is a combination of the first three letters of each of theirs—and first they lived in Denmark after his birth, trying to flee racial unrest in America. When their marriage broke up, his mother took a job as a teacher in Bahrain; thus Moore was enrolled in a school for the children of British nationals, where he soon picked up a plummy accent. As he recalled in an interview with Michael J. Maloney for Seventeen, “I was this little black kid with a lopsided Afro and clogs, saying ‘Mummy, can I have some tea?’”

Around the time he started first grade, Marilyn Moore took her son to Boston, where he encountered racism and racial epithets for the first time in his life. But his mother, he would later note, instilled in him a deep sense of self-esteem and balance.” I was taught to believe in myself, not thinking I was different because I wasn’t of one race,” he told Devona Dolliole in Black Collegian. As a teen, they moved once more—back to the Oakland, California area where he had been born. During his high school years in nearby Palo Alto, he excelled in baseball, but did poorly in class out of sheer teen laziness, he admitted. His mother laid down the law.” If you want to convince him of something he doesn’t want to do, you’d better have a hard hairbrush,” Marilyn Moore told People magazine. It was an assertion her son firmly seconded, saying his mother’s strict ways definitely made a positive impact.” She kept things in perspective,” Moore himself said in the same article.” She gave me reality checks.”

Despite his status as a standout athlete, Moore harbored a secret love of the performing arts as a teen, but was too nervous to try it out for himself.” When you’re a jock, it’s not cool to hang around with theater people,” Moore told Collier in Ebony.” I was too shy to get out there.” After graduating from high school in 1988, he won a partial athletic scholarship to nearby Santa Clara University. He began modeling to pay for the remainder. There, he played ball, dated a lot, majored in communications, and even dared to minor in theater arts. He

Career: Cast as Malcolm Winters on the CBS daytime drama The Young and the Restless, 1994; made television appearances in 1994 on Living Single and Circus of the Stars, on the Jamie Foxx Show in 1996, and on Chicago Hope in 1997; made film debut in Hav’ Plenty, 1997; played lead in Butter, an HBO movie, 1998.

graduated in 1993 with less than dean’s-list grades.” I’ve got all these friends who say, ‘I was an honor this, honor that,’” he joked with Dolliole in Black Collegian.” It was an honor for me to graduate.” Even several years later, Moore confesses to sometimes being still surprised that he earned a degree at all, but credits the perseverance it instilled in him as tremendously beneficial in the long run.” I wouldn’t have this type of success if I hadn’t graduated,” the successful actor told the magazine.

Moore was still modeling when he finished college, but in a way, found it even tougher than academics, as he admitted to Ebony’s Collier. To him, it was mentally tough.” I was too big or I wasn’t Black enough,” he said of the fashion game.” They didn’t know what I was. I was uni-race. I didn’t fit the clothes or I wasn’t pretty enough, wasn’t tough enough or Black enough.” But it was in the men’s fashion magazine GQ that a producer for the daytime drama The Young and the Restless noticed Moore, and invited him to audition. Nervous about his abilities, Moore hired an acting coach for the weekend for a thousand dollars. It was a good investment, since he won the role and began appearing on the highly-rated daytime drama in April of 1994. With his new paychecks Moore immediately began acting classes in earnest.” My looks may or may not have helped me get in the door of Hollywood,” he told Collier in Ebony.” But my looks have not kept me in Hollywood.”

Moore’s Y&R character, photographer Malcolm Win— ters, is a player, a man who once slept with brother’s wife when she was befuddled by flu medication. He and that actress, Victoria Rowell, are one-half of a quartet of African-American characters on the show whose family life is the stuff of which daytime plots are made. Moore’s on-screen wife Olivia, played by Tonya Lee Williams, is a doctor; Olivia’s sister on the show, Drucilla, is married to Kristoff St. John, who plays Moore’s on-screen brother. An estimated 2.3 million viewers tune in to watch what will happen next inside this successful, attractive, though rather unstable clan. The show has also proven extremely popular in Caribbean markets, and airs in Kenya and South Africa as well. In the U.S., it attracts more African-American viewers than any other soap. Celebrities such as Anita Baker, Janet Jackson, Aretha Franklin, and Whoopi Goldberg have all professed their addiction to the Y&R storylines.

Accordingly, Moore could soon count a massive number of enthusiastic fans after just a few months on the show. He is even pursued by women in shopping centers, and has been linked romantically with Toni Braxton, Halle Berry, and Lela Rochon. He remains a committed bachelor, however, who claims he must stick to a heavy workout schedule to keep his much-adored physique in shape. Twice Moore has been nominated for a Daytime Emmy Award as Outstanding Younger Leading Actor, and he also continues to work on his acting in hopes winning more feature-film parts. His first big-screen credit came in the 1997 film, Hav’ Plenty, and in 1998 he appeared the HBO movie Butier opposite Nia Long.” I have a big plan, but I go day-to-day,” he said in the Black Collegian interview.” I envision a goal I want manifested in five years, then I break it down… In this business, if you slip, you could fall off.”

Career: Actor. Worked as a model; appeared in television commercials and print advertisements; worked as a waiter.

Circus of the Stars Goes to Disneyland, ABC, 1994.

Himself, The Oprah Winfrey Show (also known as Oprah), syndicated, 2005.

Some sources cite an appearance as Jason Miles, It's Goin' Down, 2000.

Himself, The Making of "Motives" (short documentary), Columbia/TriStar Home Video, 2004.