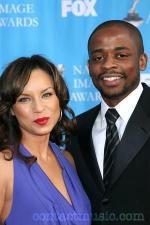 Dulé (pronounced due-lay) Hill began his career in show business at the tender age of ten, when he was selected to understudy Savion Glover in Broadway’s The Tap Dance Kid. Several more Broadway roles followed, along with television and film roles. Then, in 1999, the accomplished young actor and dancer was cast as Charlie Young, the youthful, but serious presidential aide on NBC’s celebrated and sophisticated series, The West Wing.

A New Jersey native, Hill was born in Orange in 1975, and raised in Sayreville. Both his parents, Bert, an investment banker, and Jennifer, an education consultant, were born in Jamaica. Hill’s unusual name was a suggestion by an aunt who heard it during a trip to France. Although Hill has never heard of anyone else with the name, he has, after researching his name on the Internet, found a Dulé, Egypt. His actual first name is Karim; however, he dropped it when friends at school began calling him Kareem Abdul-Jabaar.

When he was three years old, Hill began attending dance classes because, as he told People Weekly, his mother, older brother, and a cousin were all dancing and he “just wanted to be around them.” But Hill was soon bitten by the dancing bug himself. “Dancing is very peaceful,” Hill said in a TV Guide Online chat found at the West Wing Online website, “and it allows me to be as creative as I want to be. It’s very relaxing for me, and I’m constantly learning.” Although his career has evolved more toward acting than dancing, Hill told People Weekly, “You can never give up the dance.” The executive producer of The West Wing, Thomas Schlamme, claimed that the set was always alive with the pitter-patter of dancing feet. If it sounded like mice in the walls, Schlamme told People Weekly, “…it’s just Dulé.”

When Hill was ten years old, producers of Broadway’s The Tap Dance Kid called his dance school. They were looking for young dancers who could also sing and act in the upcoming production at the Minskoff Theatre. Hill’s tryout won him the role of understudy to Savion Glover. Later, Hill took over the lead role when the musical went on national tour. He also worked with Harold Nicholas, of the famed Nicholas Brothers, for 16 months to improve his dancing skills.

That role led to other musicals, including Shenandoah, Little Rascals, and Black & Blue. Despite his full schedule, Hill still found time for high school and two

years of college, studying business finance at Seton Hall in South Orange, New Jersey. During his senior year in high school, Hill won a part in his first feature film, 1993’s Sugar Hill. In the film, Hill and Wesley Snipes both played the same character, with Hill assuming the role of the teen-aged Roemello Skuggs and Snipes playing Skuggs as an adult. While at Seton Hall, Hill was cast as John in City Kids, a Saturday morning ABC television pilot. He was also later seen in various national commercials and in several television guest appearances.

Just when it seemed that Hill had hung up his dancing shoes in favor of films or television, he returned to Broadway in 1995 for a starring role with the original cast of Bring in ’Da Noise, Bring in ’Da Funk. He gave up his college studies to spend two and a half years with the production. He then won roles in several television movies, including: Color of Justice, The Ditchdigger’s Daughters, and A Love Song for Dad.

1999 marked a career-high for Hill. First, he appeared alongside Freddie Prinze, Jr. in the popular film, She’s All That. Then he won the role of presidential aide Charlie Young on The West Wing. After just one season, the series earned a record-setting nine Emmy Awards and won the prestigious Peabody Award.

The West Wing is a weekly, hour-long drama offering a behind-the-scenes view of the frenzied staffers who work at the Oval Office. Hill played the president’s inexperienced but intelligent personal assistant who quietly struggles to cope with the needs and whimsies of a president (played by Martin Sheen) who possesses charisma and great brilliance, yet needs help riding a bike. The chemistry between the two actors was obvious. Sheen, impressed with Hill’s ability, told People Weekly, “It was remarkable how poised he was for someone so young, but I realized he’s been performing since he was a child.” In turn, Hill raved about Sheen and the other cast members, several of whom are Oscar winners, in a TV Guide Online chat, saying, “Working with Karl Malden and Marlee Matlin only raises your game up, because they challenge you to be a better actor. It’s a great experience, and I just try to learn and grow.”

One of the benefits of starring on The West Wing came a few weeks after the show began shooting, when Hill and several other cast members took a VIP tour of the real Oval Office. Since the television set was an exact replica of the White House rooms, Hill felt quite at home there. During the tour, Hill met President Clinton’s personal aide, Chris Aenskov. Meeting his real-life counterpart, made Hill more aware of, as he said on the West Wing Online website, “how important the job is.”

When Hill’s character began dating the president’s daughter, Zoey, a controversial episode followed. On the show, the fact that a black man is seen with the president’s daughter sparks a group of white supremacists into firing their guns on the president and staff. Hill commented on the impact of the interracial story line on the West Wing Online: “I think its great to rattle some feathers.”

Hill, who has made his home in Studio City, California, has not forgotten his roots in dance and Broadway. He has returned to New York City now and then, often joining the cast of Noise/Funk for a little dancing in Harlem. Although he could never leave dance entirely behind, Hill has always aspired to attempt new things. “I really wouldn’t mind playing a serial killer,” he told Interview. “I’d like to go anywhere outside of what I normally do.”

Himself, The Rosie O'Donnell Show, syndicated, 2002.

Toured in The Tap Dance Kid.

Faith Hill , Hill, Faith Singer Since the advent of the “Young Country” movement in the early 1990s, several performers of exceptional talent have appeared on the… Anita Hill , Hill, Anita 1956– Lawyer, social activist, educator On October 6, 1991, Anita Hill’s life was dramatically and irrevocably changed when her charges o… bornhardt , bornhardt Rounded, often isolated hill developed in massive rock and found in the humid tropics. Its shape is controlled by large-scale exfoliation o… Andrew Hill , Andrew Hill Composer, pianist, bandleader For the Record… Selected discography Sources Andrew Hill, a groundbreaking composer and pianist, who played… Chad Michael Murray , Murray, Chad Michael Actor Chad Michael Murray moved easily from television into feature films thanks to his roles in highly rated teen dramas on the… James Jerome Hill , James J. Hill (1838–1916) rose above a childhood of poverty in Canada to become one of the great U.S. empire builders and one of the wealthiest men o…