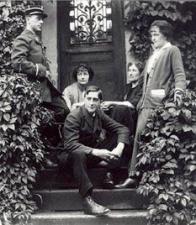 The French sculptor Raymond Duchamp-Villon (1876-1918) was one of the pioneers of the modern movement in sculpture.

Raymond Duchamp-Villon was born on Nov. 5, 1876, the second of the six children of a notary in Rouen. Christened Raymond Duchamp, he changed his name to distinguish himself from his artist brothers: Gaston, who took the name of Jacques Villon, and Marcel Duchamp. Their father encouraged them to follow careers of their own choosing. All were drawn to art, and each was given a small stipend for support.

Duchamp-Villon went to Paris to study medicine, but by 1898 he had turned to sculpture. He was essentially self-taught. His first work, which showed the influence of Auguste Rodin, was of such high quality that he was admitted to the Salon of the prestigious Societé Nationale des Beaux-Arts in 1901. His sculpture then changed, away from Rodin's earthy humanitarianism toward a neoclassicism in the manner of Aristide Maillol and Charles Despiau. In 1911 Duchamp-Villon executed a head, Baudelaire, that owed nothing to Rodin and was far more stylized than anything by Maillol or Despiau. Forms are faceted and simplified and yet without any loss of likeness. The severity of the contours, indeed the conception as a whole, recalls ancient Egyptian portrait busts, except with the Baudelaire there is an intensity of expression. Equally laconic, bare, and compact is Duchamp-Villon's bust Maggy (1912). His Lovers (1913), a plaster relief with a conventional theme, reveals further trends toward abstraction.

About this time Duchamp-Villon embraced cubism as an expression of the avant-garde rather than for its post-Cézanne constructivism. His bronze Seated Woman (1914) indicates his concern with increasing abstraction. The bronze Horse (1914) shows a radical new approach. This sculpture, despite its title, resembles a turbine or some other power-producing machine. In this respect it is closer in spirit to Italian futurism than to cubism. Duchamp-Villon knew the futurist artist Umberto Boccioni personally and was probably influenced by him. Horse, built on a spirallike composition, suggests involuted layers, which gather into a concentration of dynamic, aggressive energy.

Duchamp-Villon served in the army during World War I. He contracted blood poisoning and died at a military hospital in Cannes on Oct. 17, 1918.

An informative work on Duchamp-Villon is William C. Agee, Raymond Duchamp-Villon, 1876-1918 (1968), the catalog for an exhibition held at Knoedler's; it contains an excellent bibliography. The Solomon R. Guggenheim Museum published Jacques Villon, Raymond Duchamp-Villon, Marcel Duchamp (1956), an exhibition catalog with a short text by James Johnson Sweeney. Discussions of Duchamp-Villon's work can be found in Carola Giedion-Welcker, Contemporary Sculpture: An Evolution in Volume and Space (1955; 2d ed. 1961); Jean Selz, Modern Sculpture: Origins and Evolution (trans. 1963); and Eduard Trier, Form and Space: The Sculpture of the Twentieth Century (trans. 1961). □