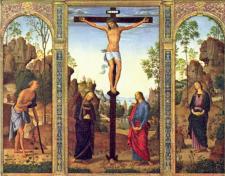 Italian painter whose style expressed classical ideals of balance and harmony, and whose works made him an important fore-runner of the High Renaissance style of Italian art. Nicknamed for the town of Perugia, he was born in the Umbrian town of Citta della Pieve as Pietro di Cristoforo Vannucci. He studied painting as a boy with the leading masters of Perugia, then left for Florence, where he apprenticed with Piero della Francesca and, as a fellow pupil of Leonardo da Vinci, with Andrea del Verrocchio. Two of his early works are The Miracle of St. Bernardino and The Adoration of the Magi. He joined the confraternity of Saint Luke, a painters guild, in the early 1470s. In 1479 he was summoned to Rome by Pope Sixtus IV and in 1481 completed a commission to assist in the decoration of the Sistine Chapel in Rome. His work for the famous chapel included The Baptism of Christ, Moses and Zipporah, and Christ Giving the Keys to St. Peter, a painting noted for its expansive open spaces and idealized, symmetrical architecture. The careful composition and harmony of the poses give this and other works of Perugino a sense of philosophical dignity and calm, ideals to which artists of the later High Renaissance would strive. Unfortunately, the paintings covered the section of wall that would later carry The Last Judgment of Michelangelo Buonarroti, and would be destroyed in order for Michelangelo to carry out his design.

In 1486, after the Sistine Chapel commission ended, Perugino moved to Florence, where he completed several major works in which human figures are artfully placed in a setting of classical architecture to achieve a sense of symmetry and serenity. These works include The Vision of St. Bernard and a tondo, or circular painting, entitled The Madonna Enthroned with Saints, both painted in the mid-1490s, as well as a Crucifixion painted for the Santa Maria Maddalena dei Pazzi in Florence. Perugina established a thriving workshop in Florence but found his work coming under criticism in the city's highly charged and competitive atmosphere. Sometime around 1496 he moved back to Perugia, where he remained for the rest of his life. He completed an altarpiece, The Ascension, for the Church of San Pietro and in 1497 he began work on a fresco series in the Audience Hall of Perugia's Collegio del Cambio, the guild hall of the city's bankers. Historians consider two of Perugino's designs, The Nativity and The Transfiguration, to be among the finest examples of his work, showing a mastery of composition and architectural perspective. The walls also carry a variety of portraits of Greeks and Romans, depictions of the cardinal virtues, and a self-portrait; historians believe that the younger Raphael, at the time Perugino's apprentice, may have helped him complete the work.

Perugino won several commissions from the aristocratic patrons, including Isabella d'Este, for whom he painted The Triumph of Chastity. He was still unsuccessful in winning the respect of his peers, however, and on one occasion had his ability insulted by Michelangelo himself. Unsuccessfully suing Michelangelo for belittling his character, Perugino responded with The Madonna and Saints, a multipaneled altarpiece completed in the Certosa of Pavia. He returned to Rome on the invitation of Pope Julius II in 1508 to paint sections of the Stanza dell'Incendio del Borgo in the Vatican, but found his own paintings overlooked for the masterpieces of his pupil, Raphael. Finally returning to Perugia in 1512, he completed frescoes for the Church of Madonna delle Lacrime in Trevi and for the monastery of Sant' Agnese in Perugia. He died during a plague epidemic in 1524.

Perugino (ca. 1450-1523) was a leading central Italian painter whose art anticipated that of the High Renaissance.

Pietro Vannucci, called Perugino was born in Città della Pieve near Perugia. According to Giorgio Vasari, Perugino, after being introduced to the artist's craft in his native town, went to Florence, where he studied with Andrea del Verrocchio. Perugino's presence in Florence in 1472 is documented. He traveled fairly extensively between Florence, Umbria, and Rome during the 1470s. In October 1481 he was one of the artists commissioned to execute frescoes for the newly completed Sistine Chapel in Rome.

Perugino worked in Rome and Perugia until 1486, when he moved to Florence, where he remained more or less continually until 1496. In 1491 he served on a commission to choose a model for the facade of the Cathedral in Florence. In 1496 or 1497 he moved to Perugia, though he continued to have interests in Florence. For example, in 1503 he was a member of a committee of Florentines empowered to choose the location for Michelangelo's David. Perugino continued to fulfill commissions in widely diverse locales such as Mantua and Rome, but he concentrated most of his artistic activities during the early 1500s in Umbria. He died of the plague in February or March 1523 in Fontignano.

Perugino's earliest works are lost. Two panels, a Miracle of St. Bernardino (1473) and an Adoration of the Magi (ca. 1475), are the earliest of the generally accepted examples of his art. The first painting is especially fine in its symmetry, uncrowded groups of figures, and pearly Umbrian landscape. The frescoes in the Sistine Chapel (1481-1482) are the most important of Perugino's early works. In Christ Giving the Keys to St. Peter Perugino arranged a frieze of figures across the foreground. In the background is an ideal architectural setting with a vast, open square and a symmetrical domed building flanked with two antique triumphal arches. In composition and clarity this design foreshadowed the balanced designs so common among the High Renaissance masters of the early 16th century.

Perugino painted a number of pictures during his Florentine period (1486-1496) in which figures and architecture are interrelated. Among them, the Vision of St. Bernard (1491-1494) and the Madonna Enthroned (1493) are noteworthy. His masterpiece of this period is the Crucifixion fresco (ca. 1495) in the convent of S. Maria Maddalena dei Pazzi, Florence. The clarity, symmetry, and balance of the composition are accented by the limited number of figures, the distant landscape, and the real and painted architecture. The sentimental expression is somewhat mitigated by the austerity of the fresco.

The frescoes (1497-1500) in the Sala dell'Udienza of the Collegio del Cambio, Perugia, are among Perugino's major accomplishments. They combine an elaborate Neoplatonic allegory with real and painted architecture to produce a remarkably unified system of decoration. One of the frescoes has a fine bust-length self-portrait. Perugino's art during the 1500s was criticized by his contemporaries. For instance, Isabella d'Este condemned his painting Combat of Love and Chastity (1505), which she had commissioned.

Perugino was one of the key transitional artists between the art of the 15th century and the High Renaissance. His compositions, with their emphasis on balance and clarity, and his treatment of almost infinite space anticipated the achievements of the great masters of High Renaissance classicism.

The standard work on Perugino is in Italian. The chapter on him in Raimond van Marle, The Development of the Italian Schools of Painting, vol. 14: The Renaissance Painters of Umbria (1933), is useful. □

Quentin Massys , The paintings of the Flemish artist Quentin Massys (c. 1465-1530) hark back to the works of his great predecessors but at the same time show an aware… Lippi , Lippi Lippi (lēp´pē), name of two celebrated Italian painters of the 15th cent., Fra Filippo Lippi and his son, Filippino Lippi. Fra Filippo Lippi Fr… Lavinia Fontana , Bolognese painter, mainly of portraits and holy scenes, who gave a successful example of Italian painting during the CounterReformation. Name variati… Michelangelo Merisi Da Caravaggio , The Italian painter Caravaggio (1573-1610) depicted insolent boys and rough peasants in the guise of Roman gods and Christian saints. They are often… Andrea Mantegna , Andrea Mantegna (ca. 1430-1506), painter and engraver, was the leading artist of the school of Padua and one of the most important early Renaissance… Carracci , Carracci The Italian painters and engravers Ludovico (1555-1619), Agostino (1557-1602), and Annibale (1560-1609) Carracci opposed the style of late m…