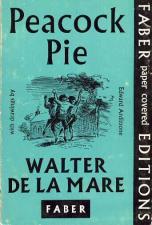 de la Mare: A Selection from His Writings, edited by KennethHopkins. 1956.

The Complete Poems, edited by Leonard Clark and others. 1969.

The Connoisseur and Other Stories. 1926.

Henry Brocken: His Travels and Adventures in the Rich, Strange, Scarce-Imaginable Regions of Romance. 1904.

Story and Rhyme: A Selection from the Writings of de la Mare, Chosen by the Author. 1921.

Broomsticks and Other Tales. 1925.

The Dutch Cheese and the Lovely Myfanwy. 1931.

Animal Stories, Chosen, Arranged, and in Some Part Re-Written. 1939.

The Magic Jacket and Other Stories. 1943.

The Scarecrow and Other Stories. 1945.

The Dutch Cheese and Other Stories. 1946.

The Sunken Garden and Other Poems. 1917.

The Sunken Garden and Other Verses. 1931.

Time Passes and Other Poems, edited by Anne Ridler. 1942.

The Burning-Glass and Other Poems, Including The Traveller. 1945.

The Burning-Glass and Other Poems. 1945.

Winged Chariot and Other Poems. 1951.

The Voice: A Sequence of Poems, edited by Catherine Brighton. 1986.

Some Women Novelists of the 'Seventies. 1929.

The Early Novels of Wilkie Collins. 1932.

Early One Morning in the Spring: Chapters on Children and on Childhood as It Is Revealed in Particular in Early Memories and in Early Writings. 1935.

An Introduction to Everyman. 1938.

Selected Stories and Verses (for children), edited by Eleanor Graham. 1952.

Editor, Come Hither: A Collection of Rhymes and Poems for the Young of All Ages. 1923; revised edition, 1928.

Editor, The Eighteen-Eighties: Essays by Fellows of the Royal Society of Literature. 1930.

Editor, Tom Tiddler's Ground: A Book of Poetry for the Junior and Middle Schools. 3 vols., 1932.

Walter de la Mare, the sixth child of civil servant Edward de la Mare and Lucy Browning, was born in Charlton, Kent. His father's family was of Huguenot descent. His mother was the daughter of a naval surgeon whose family was of Scottish origin and who was distantly related to the poet Robert Browning. Educated at the choir school of St. Paul's Cathedral, where he was a chorister, de la Mare showed early signs of literary ability in his editing of the Choristers Journal, to which he made a major contribution. On leaving St. Paul's, he became a clerk for 18 years in the city office of the Anglo-American Oil Company. When he received a small government pension, he devoted himself subsequently to a career of full-time writing. Much of his early work was published in magazines such as the Cornhill, Pall Mall Gazette, and the Sketch, under the pseudonym of Walter Ramal, an anagram of his name.

Known primarily as a poet, he wrote many collections of poetry for both children and adults. His topics range in subject matter, including animals, nature, people, the supernatural, and dreamland—subjects that figure largely in his fiction as well. Strongly rhythmic, his verse has an imaginative quality that appeals to the young in heart of all ages, as does the mysterious fascination with the macabre.

In 1910 de la Mare's long story The Three Mulla-Mulgars was published. The book concerns three royal monkeys (Thumb, Thimble, and Nod) and their dangerous journey to the paradisiacal valleys of Tishnar. He wrote the story for and read it to his own children. It embraces that imaginative quality and fine prose style that were to stamp his adult fiction. In addition to The Three Mulla-Mulgars de la Mare wrote 20 original stories for children and retold 60 others, which appear in such collections as Told Again, Stories from the Bible, Animal Stories, and Selected Stories and Verses.

In his essay entitled Rupert Brooke and the Intellectual Imagination de la Mare wrote that children "live in a world peculiarly their own, so much so that it is doubtful if the adult can do more than very fleetingly reoccupy that far-away consciousness. There is no solitude more secluded than a child's, no absorption more complete, no insight more exquisite and, one might add, more comprehensive." It is this insight into a child's mentality that infuses all his writing for and about children. The child, frequently a lonely small boy, also inhabits de la Mare's adult fiction. He is too young to appreciate his senior's dilemma, but is sensitively aware that all is not well in the grown-up world. "The Almond Tree" (in The Riddle and Other Stories) is an account of his childhood, told by a count who, as a youngster, does not realize that his mother is pregnant; nor does he appreciate why she so bitterly resents his father's regular visits to Miss Grey, a neighbor with whose brother the father plays cards. The boy is impartial in giving his affection to each of the protagonists. On finding the body of his father lying in the snow, young Nicholas remarks somewhat baldly, "I found him in the snow; he's dead." The child's grief, however, is momentary and he is glad to be his own master, to do as he pleases.

In "Miss Duveen" (in The Riddle), a moving and finely wrought depiction of a woman's increasing mental instability as a result of a youthful, unfortunate love affair, the child, Arthur, has an ambivalent attitude to Miss Duveen. He enjoys his meetings with her more, one feels, out of curiosity than understanding or sympathy. Indeed, when her cousin, a harsh woman, has Miss Duveen placed in a mental institution, the boy's reaction borders on relief, for no longer would he be "saddled with her company by the stream."

In "An Ideal Craftsman" (in On the Edge: Short Stories) the boy, much in awe of the intimidating butler, Jacobs, encounters in the kitchen the repulsive fat woman who, from unrequited love, has murdered a man after he said she was "not the first." The child, whose imagination has been fired by a "dingy volume of the Newgate Calendar, " realizes that by skillfully faking a hanging for the dead man he can save the woman's skin, but does not appreciate why she strangled him in the first place. The deed is accomplished, and he succumbs to panic as he awaits the return of his father and stepmother. The children behave as one would expect: they take pies and tarts; they outdare each other, as in "The Trumpet" (in The Wind Blows Over), but finally they give way to childish trepidation.

De la Mare sometimes adopts the device of having two people, unknown to each other, conversing in an impersonal setting such as a railway station or tearoom. One character is under a strong compulsion to tell his or her tale to the not altogether sympathetic listener. In the cases of "Missing" (in The Connoisseur) and "Crewe" (in On the Edge), the thought of murder is implicit, although the actual word is not mentioned. In "Crewe" there is the added dimension of the supernatural; the scarecrow, bearing an uncanny resemblance to the dead man, appears to move ever closer to the vicarage, which many years before had been exorcized and is thought to be haunted. Frequently, sinister events take place by moonlight or in old creaking houses.

In his novel Memoirs of a Midget de la Mare shows his compassion for the griefs and fears of the lonely, a repeated theme in his fiction. The woman, because of her tiny size, is alien to society. That same compassion is exhibited in the short story "The Picnic" (in On the Edge). The efficient but lonely Miss Curtis falls in love with a man sitting immobile and "almost excruciatingly alone" in the window, beneath which she eats her solitary picnic. Her disillusionment is complete when she discovers the man whom she has adored from afar is totally blind and will never reciprocate her feelings.

De la Mare is probably at his best when dealing with the intense world of the child and the isolation of the lonely relieved by recollection of happier days. His prose has a solid and purposeful, almost Biblical resonance. Indeed, Graham Greene described it as "unequalled in its richness since the death of James, or, dare one at this date say, Robert Louis Stevenson." For his imaginative insight, his descriptions of nature, and his ability to enter sympathetically into the situations of his subjects, de la Mare surely deserves a wider readership than fashion at present affords him.

See the essays on "A Recluse" and "Seaton's Aunt."

oxford
views updated
de la Mare, Walter (1873–1956) English poet, short-story writer and anthologist. His technically accomplished collections of poems include Songs of Childhood (1902), Peacock Pie (1913), Winged Chariot (1951), and the anthology Come Hither (1923). His prose includes the novel Memoirs of a Midget (1921) and the collection of stories On the Edge (1930).