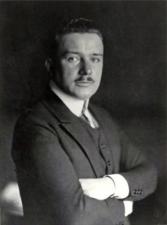 Joseph Maria Olbrich (1867-1908) was a leading architect of the Austrian Art Nouveau and one of the founders of the Vienna Secession.

Joseph Maria Philipp Olbrich was born in Troppau (Opava), then in the Austro-Hungarian Empire, now Czechoslovakia, on December 22, 1867. He attended school there but left without graduating. In 1882 he enrolled at the building department of the Staatsgewerbeschule (State Trade School) in Vienna. In 1886 Olbrich returned to Troppau and worked for the contracting firm of August Bartel, but in 1890 he was back in Vienna studying at the special school of architecture of the Academy of Fine Arts under Carl von Hasenauer. In 1893 he worked for a few months for Otto Wagner, the great Viennese architect who succeeded Hasenauer as professor at the academy.

The following year Olbrich won the Rome Prize and left for Italy, but his trip was cut short when Wagner called him back to Vienna to become his chief draftsman for planning and designing the elevated and underground railroad (Stadtbahn) of Vienna. Olbrich assumed considerable design responsibilities and is considered partly accountable for several of the stations that Wagner designed, such as the Hofpavillon in Schönbrunn and Karlsplatz Station.

In April 1897 Olbrich, together with a group of painters, sculptors, and architects, founded the Vienna Secession, an organization of artists opposed to the conservative Künstlerhaus—the official artists' association. Immediately thereafter Olbrich was commissioned to design their headquarters. This building was completed in 1898 and caused a sensation in Vienna. Bold and simple, it consisted of juxtaposed massive blocks and had a distinctly orientalizing effect. However, its cupola of metal openwork with suprabundant floral decoration was unmistakably Art Nouveau in quality.

In 1899 Ernst Ludwig, Grand Duke of Hessen, invited Olbrich, along with Peter Behrens and several other artists, to Darmstadt to form an artistic colony, which was indeed established on a nearby hill called Mathildenhöhe. Olbrich designed all the buildings for the artists' colony, as well as the general layout, the furnishings, the gardens, and the settings for the exhibitions. The architectural focus of the colony was the Ernst Ludwig House built in 1899-1900. This structure had none of the massiveness of his Vienna Secession Building, but consisted of flat surfaces enlivened by an elegant play of the wall planes. The entranceway was dominated by a large Moorish arch. For the 1901 exhibition of the colony titled "Ein Dokument deutscher Kunst" (A Document of German Art"), Olbrich designed several temporary structures, the most interesting of which was the gallery of paintings and sculpture; the dynamic outline of this building was quite striking. Its scheme was repeated again by Olbrich in his competition entry for a railroad station in Basel, Switzerland, which received a prize and was widely imitated subsequently.

In 1904 another exhibition was organized in the artists' colony; for this Olbrich designed the "Three House Group," namely three model workers' dwellings which were rather unsuccessful architecturally. However, the work that he exhibited at the Louisiana Purchase Exposition in St. Louis in the same year was quite remarkable and attracted the attention of many American architects, including Frank Lloyd Wright. Olbrich's work at the Mathildenhöhe culminated in the Exhibition Gallery and the Wedding Tower of 1906-1908. The former was a blocky and rather formal structure with a classicizing flavor. The latter, Darmstadt's wedding present to the Grand Duke, had a remarkable arched and panelled gable of five organ-pipe-like shapes that were still quite Art Nouveau. It also included a new motif, namely bands of windows that carried around the corners—a motif that was destined to be influential in the 1920s.

When Olbrich died of leukemia on August 8, 1908, he was working on two important commissions: the Feinhals House in Cologne-Marienburg built in 1908-1909 and the Tietz Department Store in Dusseldorf, designed in 1906 and completed after his death. The Feinhals House was blocky and symmetrical and had a portico of Doric columns, thus signifying the abandonment of the bold innovative architecture of his earlier years and the return to more conservative modes, a phenomenon that also could be seen elsewhere in Europe and in the United States. The Tietz Department Store emulated the verticalism of Alfred Messel's Wertheim Department Store in Berlin, although Olbrich's detailing was not medievalizing like Messel's but classicizing.

Olbrich assisted in the transformation of the historicist architectural legacy of Central Europe, in which his own education was grounded, into a new formal vocabulary. It was characteristic of the Art Nouveau movement in which he was participating that he was interested in a variety of design problems, including furniture and objects of the minor and the applied arts. His work was of uneven quality, and his buildings occasionally lacked stylistic cohesion; his smaller objects were usually more accomplished. It remains to his credit, however, that decoration was never allowed to obscure the functional aspects of his work. Olbrich was a founding member of the Bund Deutscher Architekten (Association of German Architects) in 1903 and of the Deutscher Werkbund in 1907.

oxford
views updated
Olbrich, Joseph Maria (1867–1908). Austro-Hungarian architect, one of the leading figures of the Vienna Sezession. A pupil of Hasenauer and Sitte, he worked in Otto Wagner's Vienna office (1894–8), contributing designs for the Vienna Stadtbahn (City Railway) stations. Gradually his style moved away from Wagner's dignified and simplified Neo-Classicism and began to incorporate Art Nouveau motifs. He made his reputation with the Club House and Exhibition Gallery he designed for the artists associated with the Sezession (1897–8). The building had something of Wagner's Neo-Classicism on the outside, but with Jugendstil decorative effects and a gilded wrought-iron dome-like ornament held between four battered pylon-like forms crowning the composition, a motif suggesting the Ver Sacrum (Sacred Spring—the title of an influential Sezessionist publication) heralding a new era of art. For the Max Friedmann House, Hinterbrühl (1898–9), Olbrich, influenced by the English Arts-and-Crafts movement, designed not only the building but all the furnishings and fittings.

In 1899 the artistic Ernst Ludwig Charles Albert William, reigning Grand Duke of Hesse (1892–1918), invited Olbrich to the new artists' colony at Mathildenhöhe (Matilda's Hill), Darmstadt. There, Olbrich designed the communal studios, the Ernst-Ludwig-Haus (1899–1901), with a pronounced Art Nouveau entrance flanked by two large Neo-Classical figures looking forward to the 1930s in style. For his own house (1900–1) Olbrich drew on Austro-German vernacular forms, but enlivened with blue-and-white tile squares (a motif used by Wagner and Mackintosh) set in the elevations. Seven of his houses and one by Behrens (all fully furnished) at Mathildenhöhe were ready for public inspection in 1901, the intention being to awaken a sense of modern design in Hesse: it was the first exhibition of its kind. He added further buildings to the Mathildenhöhe complex, including the Hochzeitsturm (Wedding Tower—erected partly to celebrate the Grand Duke's second marriage (1905) to Princess Eleonore Ernestine Marie (d. 1937) of Solms) and Exhibition Building (1905–8). The tower had a top reminiscent of North-German medieval stepped gables but with semicircular upper parts to the ‘steps’.

In 1907 Olbrich became a founder of the Deutscher Werkbund, and his work became more severe and Classically inspired, including the handsome Leonhard Tietz Department Store, Düsseldorf (1906–9), now the Kaufhof. His Joseph Feinhals House, Cologne (1908–9—destroyed), showed the way in which his architecture might have evolved had he lived: it was a powerful Neo-Classical composition with two severe wings between which was a Greek Doric colonnade, the whole topped by a mansard roof. Wasmuth published a sumptuous set of volumes, Architektur von Olbrich (1901–14).