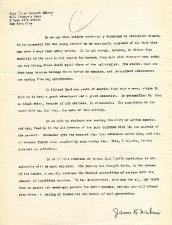 James Michener (1907-1997) is best known for hismany epic historical novels, which have sold an estimated 75 million copies worldwide. He was also anoted philanthropist, having contributed more than$100 million to universities, libraries, museums, and other charitable causes.

James Michener could be said to represent the classic "rags-to-riches" story. He was born in Doylestown, Pennsylvania, on February 3, 1907, and abadoned by his parents. Mabel Michener, a poor widow, took him in. His foster mother made a scant living by taking in laundry and sewing. As Michener told Steve Wartenberg of the Intelligencer-Record, "We never had a sled, a baseball glove, or a bicycle." In the same article his boyhood friend Lester Trauch noted that "he was the poorest boy in school, but the brightest boy. He was the only boy who wore sneakers; the rest wore shoes. They were so worn his toes stuck out of the holes at the end, and the laces were so knotted you wondered how he ever got them on in the morning." At times, Michener was even sent to the local poorhouse to live temporarily while his foster mother struggled to make ends meet.

In 1921, Michener began what would become a lifelong inclination toward travel when he went on a hitchhiking tour that took him through 45 states. That fall he entered Doylestown High School, where his chief interest was sports, especially basketball. Upon graduation in 1925, he won a scholarship to Swarthmore College. He graduated from college summa cum laude in 1929 with a bachelor's degree in English and history. His first job was as an English teacher at Hill School in Pottstown, Pennsylvania, where he worked from 1929 to 1931. He then received a Lippincott Travel Fellowship and, for the next two years, traveled in Europe. His studied in Scotland, England, and Italy, worked on a Mediterranean cargo ship, and toured Spain with a troupe of bullfighters. Upon returning to the United States in 1933, Michener accepted a teaching position at George School in Doylestown. While there he met Patti Koon; they were married in 1935. The following year, Michener was offered an associate professorship at the Colorado State College of Education in Greeley, where he taught until 1939. He also obtained his master's degree in English in 1937. His next move was to Harvard University's School of Education, where he was a visiting professor from 1939 to 1940. In 1940, he began a nine-year stint as a social studies editor at Macmillan.

In 1943, an event occurred that would drastically change Michener's life, although perhaps not in the way he expected. He had enlisted as an apprentice seaman in the United States Naval Reserve when World War II broke out and, in 1943, was called to active duty. He was sent to the South Pacific in 1944, where he traveled from island to island, learning about local culture and history and hearing stories from the residents. Michener developed an idea for a book and began to spend his nights tapping it out with two fingers on an old typewriter, using the backs of letters from home, old envelopes, and official Navy correspondence. Ultimately the recording of his experiences became his first well-known book, Tales of the South Pacific, published in 1947. "I was hoping," Michener told Steve Wartenberg of the Intelligencer-Record, "I could write a series of stories that would tell men who were drafted into the military in those difficult years what life was like. I gambled that when they returned home and demobilized, they would remember their experiences as the most vital of their lives, and they would want to read about it, and my book would be there." Michener's gamble paid off-Tales of the South Pacific won a Pulitzer Prize in 1948 and was adapted by Rogers and Hammerstein into the popular musical comedy, South Pacific in 1949.

In 1948, Michener and his first wife were divorced and he married Vange Nord, an aspiring writer. The couple bought some property and built a new house, and Michener proceeded to publish several more books, including The Fires of Spring (1949), Return to Paradise (1951), The Bridges at Toko-Ri (1953), and Sayonara: The Floating World (1954). In addition, Michener began working as a roving editor for Readers Guide, an endeavor he continued until 1970. In 1955, he and his second wife divorced and Michener married Mari Yoriko Sabusawa. Although they had no children of their own, throughout their 39-year marriage Michener and his third wife housed and cared for many underprivileged children.

With the publication of his first historical novel, Hawaii, in 1959, Michener's writing career took on greater challenges. Like many such novels that were to follow, Hawaii was based on extensive research into the social, cultural, economic, and political history of a particular region and spanned generations of a family. Others of this kind included Caravans, about a romantic American girl in Afghanistan (1963); Centennial, which presented the history of Colorado from prehistory through the twentieth century (1974); Chesapeake, a depiction of 400 years of history on Maryland's eastern shore (1978); and The Covenant, a full history of South Africa (1980). Poland (1983), Texas (1985), Alaska (1988), and Caribbean (1989) were others among the more than 40 books Michener published. Space, published in 1982, dealt with NASA and space exploration and was one of Michener's most popular books. His novels sold an estimated 75 million copies worldwide. Several were made into motion pictures, including Tales of the South Pacific, Hawaii, Texas, and Space.

Despite the popularity of his novels, Michener received mixed critical reviews. Some called him mediocre and long-winded, relying too much on trivial historical detail and not enough on imaginative language and subtlety. Others praised his ability to mold the vast amount of research into a story that taught about cultural diversity. Said Nelson DeMille in People Weekly, "He's the grand old man of historical fiction" who "didn't play with the facts. He got them across in such a way that you actually learned something."

Although Michener was best known for his novels, they were not his only products. His earliest work, which consisted of 15 articles on teaching social studies published between the years 1936 and 1942, provided examples of the way in which Michener used fiction as a teaching device. In his book Return to Paradise (1951), Michener alternated essays about Asia with stories designed to exemplify the essays. The Novel (1991), though fiction, taught about art and the craft of writing. Michener also wrote books about Japanese art: Japanese Prints (From the Early Masters to the Modern, 1959, and Modern Japanese Prints, 1962), the electoral college (Presidential Lottery: The Reckless Gamble in Our Electoral System, 1969), sports (Sports in America, 1976), and the 1970 shooting at Kent State (Kent State: What Happened and Why, 1971). He published his memoirs, titled appropriately The World is My Home, in 1992. In 1994, he wrote Recessional, about retirement life in Florida and gave readers insight into Michener's own thoughts and feelings at that point in his life.

Michener first became active in politics when he was chairman of the Bucks County, Pennsylvania, campaign for John F. Kennedy in the 1960 presidential election. In 1962, he lost his run for Congress as a Democrat. He served as secretary of the Pennsylvania Constitutional Convention in 1967-1968, during which a new state constitution was written. Michener also served as a correspondent for President Richard Nixon during his 1972 trips to the Soviet Union and China.

Michener is known for his generous contributions to various organizations, estimated to be at least $100 million. Examples include $7.2 million to his alma mater, Swathmore College; $64.2 million to the University of Texas at Austin; and $9.5 million to the James A. Michener Art Museum in Doylestown, Pennsylvania. In addition, Michener designated the royalties from many of his books to various charitable organizations. In 1997, Fortune magazine listed Michener as the previous year's twenty-first most generous philanthropist. His response was characteristically humble. He said in the Intelligencer-Record, "I had been educated with free scholarships. I went to nine different universities, always at public expense, and when you have that experience, you are almost obligated to give it back. It's as simple as that." He phrased his position in another way in the Austin American-Statesman in 1996: "The decent thing to do," Michener stated, "is to get rid of some of this money."

Throughout his long career, Michener received numerous awards. Some of the most noteworthy include the Einstein Award from Einstein Medical College in 1967, the Medal of Freedom (the highest honor that can be bestowed on a civilian) from President Gerald Ford in 1977, the Pennsylvania Society Gold Medal in 1978, the Franklin Award and Spanish Institute Gold Medal in 1980, and an award for Outstanding Philanthropist by the National Society of Fund Raising Executives in 1996. He has also received honorary degrees from more than 30 universities and has had libraries and museums named after him, even though Bruce Katsiff, director of the James A. Michener Art Museum, told the Intelligencer-Recorder, "He never wanted anything to be named after him." Another honor came in the form of a television series on PBS called The World of James A. Michener, a program that explored some of the regions in which his novels were set.

In the midst of his professional achievements, Michener suffered a severe loss when his wife died of cancer in 1994. By this time Michener himself was in poor health; he had undergone hip surgery, major bypass surgery, and suffered from severe kidney problems which required dialysis treatments three times a week. Despite these ailments, Michener continued to write, publishing This Noble Land: My Vision for America in 1996 and A Century of Sonnets in 1997. In October 1997, Michener stated in a Newsweek, article that he had "accomplished what he wanted to accomplish" and had decided to unhook himself from the lifesaving dialysis machine. He died in his home in Austin, Texas, on October 16, 1997, at the age of 90.

Although Michener's generous donations undoubtedly helped many people, it may be the message he tried to convey in his books for which he should be most appreciated. That message was simple but clear: All people are the same, regardless of where they come from. As Michener stated in the Intelligencer-Recorder, "I really believe that every man on this Earth is my brother. He has a soul like mine, the ability to understand friendship, the capacity to create beauty. In all the continents of this world, I have met such men."