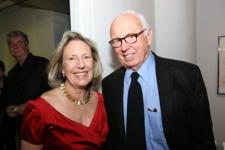 Prolific American painter and sculptor Ellsworth Kelly (born 1923), a leader of the hard-edge school, is best known for his huge canvases of geometric forms in bright colors.

Ellsworth Kelly was born on May 31, 1923, in Newburgh, New York. He went to elementary and high schools in New Jersey, attended Pratt Institute in Brooklyn, New York, and served in the U.S. Army Engineer Corps during World War II (1943-1945). Ironically, in terms of his later use of color, he served in the camouflage unit in France.

Kelly got his initial training at the School of the Museum of Fine Arts in Boston (1946-1948), then went on to the École des Beaux-Arts in Paris. He had his first one-man show in Paris in 1951 and continued to live there until 1954, when he returned to New York City.

In New York, Kelly exhibited at the Betty Parsons Gallery in 1956, 1957, and 1959. By this time his work had begun to attract wider attention, and he was asked to participate in various group shows, the most important at the Brussels World's Fair (1958) and the Museum of Modern Art (New York, 1959). After 1960 Kelly gained increasing national and international recognition. He was invited to show at the São Paulo Biennial in 1961 and at the Seattle World's Fair in 1962.

Kelly's work can be seen in numerous museums. In addition, he executed several public commissions, the most notable being a painted metal relief for the Transportation Building in Philadelphia (1957), a plastic mosaic mural for the Eastman House in New York, and a mural for the New York State Pavilion at the New York World's Fair of 1964-1965. His awards include the Carnegie International of 1962 and 1964 and a fine-arts citation from Brandeis University in 1962.

From his earliest work Kelly's style was consistently cool and hard-edged in orientation. Living in Paris, he was influenced by the geometric abstraction of such European artists as Piet Mondrian. This is especially apparent in his paintings of the early 1950s, many of which are based on strict geometric modules. Unlike Mondrian, however, Kelly frequently composed his paintings in separate panels that could be joined to form a large, single image. Many of these works are as much murals as easel paintings, and they demonstrate how Kelly's art is amply suited to the demands of architectural settings.

Some of Kelly's finest individual paintings were executed during the 1960s. Blue-White (1962) consists of two large blue masses that barely converge within a white field; the clean simplicity of Kelly's drawing allows these forms to expand enormously, resulting in a work of truly monumental scale.

Well into the 1990s, Kelly continued to gain in popularity and recognition. A quiet man who was seldom seen at functions of the art world, he once said, "I'm not interested in edges. I'm interested in mass and color."

In 1991, Kelly was again part of an exhibition at the Whitney, and the following year he was shown again at the Guggenheim as part of the Art of This Century exhibit. In the fall of 1996, Kelly's works were presented in a major retrospective at the Guggenheim.