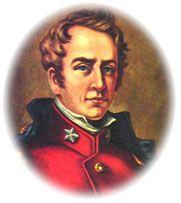 American patriot William Barret Travis (1809-1836) was a hero of the Texan War for Independence against Mexico.

William Travis was born on Aug. 9, 1809, in present Saluda County, S.C. When he was 9, his family moved to a farm in Alabama. Before his twentieth birthday, after studying law, he was admitted to the bar. Unable to support himself entirely by practicing law, he also taught school.

Standing 6 feet in height, weighing 175 pounds, redheaded, and blue-eyed, Travis married one of his pupils, Rosanna E. Cato. The marriage was unhappy, and in 1831 he moved to Texas, establishing a law practice at Anahuac, the legal port for Galveston Bay.

In Texas, Travis quickly conceived an intense dislike for the Mexican government and became a leader of the militant faction working for independence. In 1832 he participated in disputes with the Mexican commanding officer at Anahuac that led to his arrest. In October 1832 he moved to San Felipe, the center of the American colonies in Texas. He practiced law, was secretary of the city council, and courted Rebecca Cummings, whom he intended to marry. His divorce was approved in 1835, and he received custody of his son. The outbreak of the Texas revolution prevented his marriage to Rebecca Cummings.

In the early fighting Travis commanded a scouting company at the Battle of San Antonio. Next he was a recruiter and then was named a major of artillery. Transferring to the cavalry as a lieutenant colonel, he arrived at San Antonio on Feb. 3, 1836, at the head of 25 men. Commanding the volunteers at San Antonio was James Bowie. Both men had orders to quit the Alamo, a mission chapel of fortress proportions, but both chose to disregard the order. On February 23 the dictator of Mexico, Antonio López de Santa Ana, arrived with an army of 5, 000 men. When Bowie fell ill, Travis, with 186 men, assumed total command of the Texan forces. Desperately he wrote for aid: "I call on you in the name of liberty, of patriotism & everything dear to the American character to come to our aid…. If this call is neglected, I am determined to sustain myself as long as possible & die like a soldier." His last note was to the friend caring for his son: "Take care of my little boy…. If this country should be lost, and I should perish, he will have nothing but the proud recollection that he is the son of a man who died for his country."

On March 6 the Mexicans stormed the Alamo and killed every defender, including Travis. The Alamo Cenotaph, erected in 1936 by the state of Texas, commemorates these heroes, especially Travis, whose indomitable will and incendiary pen furthered the cause of Texan independence.

A useful source is The Diary of William Barret Travis, edited by Robert E. Davis (1966). Also valuable is the chapter on Travis in H. Bailey Carroll and others, Heroes of Texas (1964).

Vigilante Woof! Street Gang 1983 (R) , Vigilante Justice Sources Crisis and Response. Before civil and judicial institutions could be firmly established, frontier law was often enforced by… Fort Sam Houston , Houston, Sam Sam Houston Sam Houston was the first president of the Independent Republic of Texas , and he later served as governor of the state of T… Robert Emmett Bledsoe Baylor , BAYLOR, ROBERT EMMETT BLEDSOE Robert Emmett Bledsoe Baylor achieved prominence as a jurist, a Baptist preacher, and a law professor. He was instrumen… Charles Goodnight , Charles Goodnight The American cattleman Charles Goodnight (1836-1929) opened a series of cattle trails from Texas to New Mexico, Colorado, Wyoming,… Alamo , In the late 1820s and early 1830s, hundreds of Americans and Europeans flooded into the northern province of Mexico, known as Tejas (Texas). The Amer… Texas Rangers , The Texas Rangers are a modern law enforcement agency that traces its origins to 1823, when Stephen F. Austin, the leader of the Anglo colonists in T…