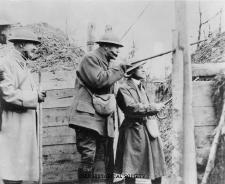 oxford
views updated
Baker, Newton D. (1871–1937), urban reformer, secretary of war.The career of Newton D. Baker, Woodrow Wilson's second secretary of war (1916–21), was paradoxical. A compassionate man, he balanced concern for justice with commitment to order. A man of peace, he became an accomplished warmaker. A social reformer, he did little to combat wartime racial and political prejudice in the army. An antimilitarist, he supported national conscription. A man with no experience in foreign affairs, he supervised the movement of the American Expeditionary Forces (AEF) to France and protected their independence against the French and British who attempted to amalgamate them with their own armies. The rather unimposing, bespectacled, owlish‐looking cabinet officer thus gave President Wilson a strong hand at the peace table and achieved recognition as a successful secretary of war.

A lawyer and reform Democratic mayor of Cleveland, Baker had a reputation as a pacifist as well as an efficient administrator when Wilson appointed him to succeed Lindley Garrison in March 1916 on the eve of the U.S. Punitive Expedition into Mexico. Unlike Garrison, who had been won over by the generals and the Republican‐based Preparedness movement, Baker always remained loyal to Wilson. In the War Department he was a conciliator and kept congenial connections between his office, the General Staff, and the army's bureau chiefs as long as possible. Even during the war production and transportation crisis in the winter of 1917–18 he refused to act hastily; it was April 1918 before authority was adequately concentrated in the General Staff and the War Industries Board. Baker also refused to resolve command issues between the War Department and the AEF. In the struggle between Gen. John J. Pershing and Chief of Staff Peyton C. March for the control of military policy, Baker did not decide in March's favor until the war was nearly over. The secretary believed that most problems were resolved if left alone. After the war, he remained an outspoken Wilsonian internationalist and was a candidate for the Democratic presidential nomination in 1924.
[See also World War I: Domestic Course.]