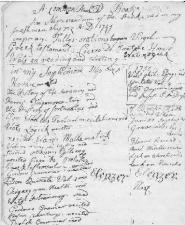 American clergyman, scientist, and politician Manasseh Cutler (1742-1823) was a member of the Ohio Company of Associates and coauthor of the Northwest Ordinance of 1787.

Manasseh Cutler, the third child and eldest son of Hezekiah and Susanna Cutler, was born on May 13, 1742, in Killingly, Conn. He grew to manhood on his parents' farm. After graduating from Yale in 1765, he taught school in Dedham, Mass. The following year he married Mary Balch, and the couple moved to Martha's Vineyard, where Cutler ran a store. Cutler studied law, and by 1767 he was practicing in the Court of Common Pleas. The following year he returned to Yale to receive a master of arts degree and then began his study for the ministry. In September 1771 he was ordained and installed as pastor in the Congregational Church at Ipswich (later Hamilton), Mass.

Cutler's first church was to be his lifelong parish, although he frequently left Ipswich for business or for political activity. During the early years of the Revolutionary War he served as a chaplain.

Because of continuing financial difficulties, Cutler turned to studying medicine under the tutelage of a member of his congregation, and by 1779 he began practice. From medicine he turned to a study of the physical and biological sciences and began working with such varied instruments as sextants, telescopes, and microscopes, in addition to experimenting with an "electrical machine" and carrying out a widespread program of smallpox vaccination.

Among his widely varied scientific activities, botany became Cutler's particular interest. He examined and classified at least 350 species of plants found in New England, and during the 1780s he published an article, "An Account of Some of the Vegetable Productions Naturally Growing in This Part of America." In recognition of his untiring scientific activity, Cutler received membership in the American Academy of Arts and Sciences, the American Philosophical Society, the Philadelphia Linnaean Society, and the American Antiquarian Society. Yale gave him an honorary degree in 1789.

On March 1, 1786, Cutler joined a group of New England speculators who formed the Ohio Company of Associates. Hoping to take advantage of the Federal government's desperate need for funds, the company proposed buying Federal land with depreciated government securities issued during the Revolutionary War. The company sent Cutler to negotiate, and he suggested that Congress table its plan to sell land in small amounts to individual citizens and, instead, sell a vast tract at the confluence of the Muskingum and Ohio rivers to his company.

Finally, during July 1787, the secretary of the Board of Treasury, whose office handled land sales, intimated that Congress would accept Cutler's plan if members of the government could share in the profits. The result was a complex scheme under which the Ohio Company got its 1,000,000 acres of land, and a second group, the Scioto Company, got an option on several million acres more. On July 27, 1787, the Board of Treasury agreed to sell the land to the Ohio Company of Associates at a true cost of about 8 cents an acre.

Next, Cutler reminded Congress that few citizens would migrate to the new territory until Congress provided a system of orderly government there. This was no new idea. Congress had argued about the question for years. But Cutler's demand for a workable plan, coupled with the expectations of profits from increasing land sales, caused Congress to act. In early July 1787 Cutler helped to rewrite a proposal for establishing government in the West, and on July 13 the Ordinance of 1787, or the Northwest Ordinance, was adopted.

The ordinance established the territory northwest of the Ohio and provided for a series of steps through which the government of the region would move toward eventual statehood on an equal footing with the original 13 states. It created an American colonial system for the new territories and assured continuing political rights to citizens who wished to move to the frontier. For Cutler and the Ohio Company of Associates, the land sale and pattern for later government opened the area for settlement.

After visiting Ohio for a year, Cutler returned to Massachusetts, where he served a single term in the General Court and then represented his district for two terms in the U.S. House of Representatives. In 1804 he retired to private life. He continued his scientific activities and participated in the scholarly organizations to which he belonged. A tall, portly man with gracious manners, he was a striking figure in his black velvet suit, black knee stockings, and silver shoe buckles. Cutler died on July 28, 1823.

There is no modern biography of Cutler, and historians have to depend on William P. and Julia P. Cutler, The Life, Journals and Correspondence of Rev. Manasseh Cutler (2 vols., 1888), for the basic factual information about his career. Cutler's activity in the Ohio Company may be traced in both the introduction and documents of Archer B. Hulbert, ed., Ohio in the Time of the Confederation (4 vols., 1918), and in Frazer E. Wilson, Advancing the Ohio Frontier (1953). Francis S. Philbrick, The Rise of the West, 1754-1830 (1965), provides a balanced discussion of the era and its major developments. □