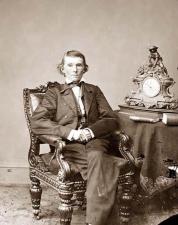 Alexander Hamilton Stephens (1812-1883) was a U.S. congressman, vice president of the Confederacy, and briefly governor of Georgia.

Alexander H. Stephens was born on Feb. 11, 1812, in Wilkes County, Ga. Sickly almost from infancy and orphaned at the age of 14, Stephens received little education until he went to a small academy in Washington, Ga. He graduated from the University of Georgia in 1832 at the head of his class. Two years later he was admitted to the Georgia bar.

Acutely aware of his era's political issues, Stephens criticized the idea of nullification but upheld the right of a state to secede from the Union. In 1836 Stephens was elected to the state legislature. In 1843, elected to the U.S. Congress, Stephens consistently, but moderately, championed Southern interests. He endorsed the Compromise of 1850 but warned the North that any conciliation must be reasonable toward the South. He collaborated in forming Georgia's short-lived Constitutional Union party and helped draft the "Georgia Platform," which combined acceptance of the Compromise of 1850 with strict Northern observance of the Fugitive Slave Law.

In 1852 Stephens and other Georgia Whigs voted for Daniel Webster for president, despite the fact that Webster had died before the election. Thereafter Stephens became identified with the Democratic party, still carefully guarding his habitual political independence. Stephens's view of the slavery question evolved from his initial denial that he defended slavery to a support of the system as best for the inherently inferior black and, finally, to plans for reopening the foreign slave trade.

Stephens retired from Congress in 1859, asserting his concept of society to be hierarchical. "Order is nature's first law," he said, "with it comes gradation and subordination." During the secession crisis after Abraham Lincoln's election in 1860, he counseled moderation. Voting for Georgia's secession in January 1861, Stephens was quickly elected vice president of the Confederacy.

However, Stephens's scruples and his constitutional restraint made him dissatisfied with the Confederate government. He found fault with numerous government practices, conscription and suspension of habeas corpus, in particular. After the war, Stephens counseled acceptance of its result and of the Reconstruction plans. He wrote several popular books on the war and American history. Elected to Congress in 1872, he again proved a master parliamentarian and guardian of the public interest. After resigning from Congress in 1882, he was elected governor of Georgia but died on March 4, 1883, a few months after his inauguration.

The recent account of Stephens is Rudolph R. Von Abele, Alexander H. Stephens (1946), a critical study not always scholarly in documentation. Eudora Ramsay Richardson, Little Aleck: A Life of Alexander H. Stephens, the Fighting Vice-president of the Confederacy (1932), emphasizes Stephens's personal life but lacks satisfactory analysis. The political background and Stephens's role are well covered in Burton. J. Hendrick, Statesmen of the Lost Cause: Jefferson Davis and His Cabinet (1939), and Rembert W. Patrick, Jefferson Davis and His Cabinet (1944).

Norwood, Martha F., Liberty Hall, Taliaferro County, Georgia: a history of the structures known as Liberty Hall and their owners from 1827 to the present, Atlanta: Georgia Dept. of Natural Resources, Office of Planning and Research, Historic Preservation Section, 1977.