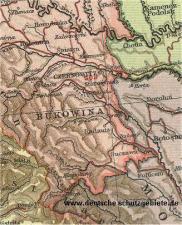 Independent state in e Europe. Ukraine (borderland) is the second-largest country in Europe (after Russia). The coastal lowlands include the Black Sea port of Odessa. Crimea is a peninsula region, and contains the vital port of Sevastopol. The River Dnieper divides Ukraine into e and w. The capital, Kiev, lies on its banks. In the w, the Carpathian Mountains rise to 2061m (6762ft), close to the Romanian border. The fertile central plateau is among the world's greatest producers of wheat and barley. In the e the Donets Basin is one of the world's greatest industrial powerhouses. The cities of Kharkov and Donetsk are major industrial centres.

Ukraine's continental climate is moderated by proximity to the Black Sea. Winters are most severe in the ne and the highlands. Rainfall is heaviest in summer.

The once-grassy central steppe is now mostly under the plough. The black, chernozem soil of the s is especially fertile. In the n, around the Pripet marshes, are large woodlands, with trees such as ash and oak. Pine forests cover the slopes of the Carpathian and Crimean mountains.

In ancient history, the area was successively inhabited by Scythians and Sarmatians, before invasions by the Goths, Huns, Avars, and Khazars. The first Ukrainian Slavic community originates from this period. In the 9th century, the Varangians united the n regions as Kievan Rus. The empire disintegrated under the onslaught of the Mongol hordes. In the late 14th century, Ukraine became part of Lithuania. In 1478, the Black Sea region was absorbed into the Ottoman Empire. In 1569, the Lithuanian sector passed to Poland following the Poland-Lithuania union.

The enserfment of the peasantry and persecution of the Ukrainian Orthodox Church marked Polish rule. In 1648, refugees from Polish rule (Cossacks) completed Ukraine's liberation. Independence was short-lived due to the emerging power of Russia. A succession of wars resulted (1775) in the division of Ukraine into three Russian provinces. The nationalist movement was barely suppressed and found an outlet in Galicia. Ukraine's industry developed from the 1860s.

In 1918 (after the Russian Revolution), Ukraine declared independence and was invaded by the Red Army, which was repulsed with the support of the Central Powers. The World War 1 armistice prompted the withdrawal of the Central Powers. A unified, independent Ukraine was once more proclaimed. The Red Army invaded again, this time with greater success. In 1921, Poland received w Ukraine, and in 1922 e Ukraine became a constituent republic of the Soviet Union. In the 1930s, Stalin's autocratic, agricultural collectivization replaced Lenin's policy of appeasement. The programme caused 7.5 million Ukrainians to die of famine. The 1939 Nazi-Soviet partition of Poland reunified the Ukraine. In 1940, it also acquired Northern Bukovina and part of Bessarabia from Romania. In 1945, it gained Ruthenia from Hungary and e Galicia from Poland.

After 1945, all Ukrainian land unified into a single Soviet republic. In 1954, the Crimea was annexed to the Ukraine. Ukraine became one of the most powerful republics in the Soviet Union, contributing 30% of total Soviet industrial output. In 1986, the Chernobyl disaster contaminated large areas of Ukraine. After a unilateral declaration of sovereignty in 1990, Ukraine proclaimed independence in August 1991.

In December 1991, the former Communist leader Leonard Kravchuk was elected president and Ukraine joined the Commonwealth of Independent States (CIS). Tensions with Russia over the Crimea, the Black Sea fleet, the control of nuclear weapons, and oil and gas reserves eased after a treaty in 1992. Crimean independence was refused. In the 1994 presidential elections, Leonid Kuchma defeated Kravchuk. Kuchna continued the policy of establishing closer ties with the West, and sped up the pace of privatization. In 1995, direct rule was imposed on Crimea for four months. Subsequent elections saw reduced support for pro-Russian parties. Disputes continue about the extent of the powers of the Crimean legislature. Kuchna was re-elected in 1999. In 2001, Prime Minister Viktor Yushchenko was dismissed by Parliament. Pope John Paul II made his first visit to Ukraine in June 2001. The results of presidential elections in 2004 were disputed and, after demonstrations and international pressure, re-run with Viktor Yushchenko declared the winner.

Ukraine plunged into economic crisis with the rapid dismantling of its command economy. It is a lower-middle income economy (2000 GDP per capita, US$3850). Agriculture is important – Ukraine has been called the ‘breadbasket of Europe’. It is the world's leading producer of sugar beet and the second-largest producer of barley. It is also a major producer of wheat. Other crops include maize, potatoes, sunflowers, and tobacco. Livestock rearing and fishing are other important activities. Ukraine has extensive raw materials. The Donets Basin is the world's eighth-largest producer of bituminous coal. Krivoy Rog mines are the world's fourth-largest producer of iron ore, and Nikopol is the world's leading manganese ore producer. Many of the coal mines are exhausted, and in 1995 the government closed 19 coal mines. Antiquated technology contributes to the highest mining fatality rate in the world. Despite its hydroelectric and nuclear power stations, Ukraine relies on oil and natural gas imports. Ukraine's debt to Russia (2000, US$1400 million) has been offset partly by allowing Russian firms to hold majority shares in many Ukrainian industries.