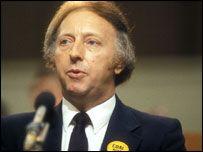 Arthur Scargill (born 1938) was the militant, controversial president of the British National Union of Mineworkers who led the longest and most violent miners' strike in British history.

Arthur Scargill, the son and grandson of coal miners, was born in Worsborough, South Yorkshire, in 1938. The house in which he was born and in which he lived for his first three years had neither plumbing nor electricity. In time he and his family moved to a more comfortable, modern home in the town where he grew up.

Scargill was an only child, and his parents, Harold and Alice, doted on him. His father was a loyal member of the Communist Party, and The Daily Worker was read regularly in the Scargill household. As a boy Scargill read of starvation and injustice in such books as The Ragged Trousered Philanthropists and of the courage and nobility of the revolutionary working classes in Twelve Months in Hell. Spurred by the outrages he saw in capitalist society, the young Arthur vowed to work for a more equitable world.

After leaving Worsborough Dale School at 15, Scargill, unable to find other works, reluctantly followed his father into the pits. His first job was removing loose chunks of rock from the coal in the screening sheds of the Wooley Colliery, near Barnsley. Faced with the incredible heat and choking dust of the sheds, Scargill almost turned and ran on his first day from what he described as a scene from Dante's Inferno. He stayed, however, and as a self-appointed representative of the apprentices he soon began making demands for better working conditions. Experiencing first hand the plight of industrial laborers, Scargill wrote letters of complaint to a number of agencies and newspapers. The only response came from a representative of The Daily Worker who convinced him, at the age of 17, to join the Young Communist League of Britain. Within 18 months the energetic Scargill was sitting on the executive board of that organization.

At the age of 19 Scargill attended the 1957 world youth festival in Moscow as the representative of the Yorkshire miners. While there he met with such Russian leaders as Nikita Khrushchev and Nikolai Bulganin. Upon returning to Britain, he joined the Campaign for Nuclear Disarmament and was defeated when, in his first attempt to win political office, he stood as an independent Communist in a local council election. For reasons that remain unclear Scargill, who made no secret of his Communist beliefs, never formally joined the Communist Party and in his later years described himself as a socialist.

While working in various jobs in the mines for 17 years he continued to study economics, history, and industrial relations in day release courses. He also began to rise in the ranks of his local union and in 1964, at the age of 26, was elected representative to the Yorkshire area meetings. Scargill first gained notoriety in the strike of 1972 when, as spokesman for the Yorkshire miners, he organized the system of flying pickets who rushed to mines or plants outside of their own area to assist fellow strikers. He played a prominent role in the much-publicized "battle of Saltley Gate" that closed the huge Saltley coke depot in Birmingham. This assured his election as financial secretary of the Yorkshire area, an important victory that gave him a seat on the national executive committee of the National Union of Mineworkers (N.U.M.). A few months later, in May 1973, he was overwhelmingly elected president of the Yorkshire mineworkers.

After the miners' strike of 1974, which brought down Edward Heath's Conservative government, the militant Left under Scargill's leadership made great strides within the structure of the N.U.M. The victory of the Conservatives under Margaret Thatcher in 1979, after another wave of strikes destroyed the Labour Party's majority, was met by the N.U.M.'s election of Scargill to the presidency in 1981 with over 70 percent of the vote. The expected conflict between Scargill's union and Thatcher's government erupted in early 1984 when the National Coal Board announced the planned closure of several "uneconomic" pits across the country. In a divisive, unpopular decision the executive of the N.U.M., at Scargill's urging, declined to permit a national vote by the membership before calling local work stopages to protest the closing of the pits.

The strike, which began on March 12, 1984, lasted for a year before ending in failure. It was one of the most violent disputes in British labor history, and both Scargill and his wife were among the hundreds of strikers arrested. Support for the walkout varied in different parts of the country, with one third of the pits remaining open, and many miners and other workers who believed the strike was unconstitutional denounced Scargill personally for its failure. The Labour Party and Trade Union Congress leaders blamed "the Scargill factor" for fragmenting the labor movement and driving moderate voters into the ranks of the opposition. The Thatcher government strategy of refusing to legitimize the union by attempts at compromise marginalized the union, and dispirited strikers broke ranks to return to work by year's end.

Despite the failure of the strike and the anxiety caused by Scargill's neo-Marxist rhetoric and confrontational tactics, he clearly remained popular with the majority of miners. To demonstrate their loyalty to him in 1985 they supported controversial changes in national procedures that permitted Scargill to remain president of the N.U.M. for life.

Picking Up the Pieces

In the years following the miners' strike, the labor battle lost on the streets returned to the newspapers and airwaves. N.U.M. supporters claimed the conservative Thatcher government, learning from Heath's mistakes, adopted strategies to break the union even before the strike, increasing government subsidies to nuclear power and gas to undercut and weaken the nationalized coal industry. Once the government announced plans to close mines and lay off 20,000 workers, critics charged, Thatcher waged war on the union using tactics reserved for severe internal security threats. Government undercover agents infiltrated the union and wreaked havoc on public perceptions. At one juncture, a union official who later was alleged to be a Thatcher agent approached Libyan officials with great public fanfare asking for donations. That incident did much to turn public opinion against the miners' cause during the strike.

Scargill turned his attention to politics, leading disaffected members of the Labour Party to form a splinter Socialist Labour Party in 1996 after he concluded Labour leaders had betrayed the basic principles of the party constitution in a move to the right. While the first candidate backed by Scargill's new party was humiliated in polls, Scargill pressed on, despite political in-fighting which threatened to splinter the new SLP even further. Scargill personally entered the political fray for a second time in a run for parliament, but won scant support.

Scargill and his wife Anne, herself a miner's daughter and an active organizer of miners' groups, had one daughter, Margaret. They lived in the house Scargill grew up in Worsborough, South Yorkshire.

oxford
views updated
Scargill, Arthur (1938– ) English trade union leader. A miner at the age of 18, he was a member (1955–62) of the Young Communist League before joining the Labour Party. In 1981, Scargill became president of the National Union of Mineworkers (NUM). His attempt to confront Margaret Thatcher's programme of pit closures and anti-union legislation led to a miner's strike (1984–85). The strike split the miners' and Labour movements. In 1995 he formed the Socialist Labour Party.

Lech Walesa , Lech Walesa Lech Walesa Lech Walesa (born 1943), charismatic leader of Solidarity, the independent trade union movement in Poland, was awarded the 19… Harry Bridges , Harry A.R. Bridges The American labor leader Harry A.R. Bridges (1901-1990) became one of the best known radical trade unionists during the 1930s and… Wladyslaw Gomulka , Wladislaw Gomulka Wladislaw Gomulka (1905-1982) ruled Poland for 14 years as first secretary of the Communist party. His career in politics reflected… Strike , strike / strīk/ • v. (past struck / strək/ ) 1. [tr.] hit forcibly and deliberately with one's hand or a weapon or other implement: he raised his han… United Mine Workers Of America , UNITED MINE WORKERS OF AMERICA (UMWA), a labor union founded in 1890 by bituminous coal miners from the United States and Canada who met to consolida… William Zebulon Foster , William Zebulon Foster William Zebulon Foster William Zebulon Foster (1881-1961), a leading figure in the Communist Party of the United States for 4…