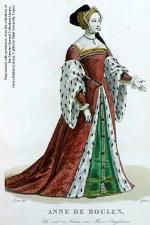 ANNE OF BRITTANY (1477–1514; ruled 1491–1498, 1499–1514), queen of France. Duchess of Brittany and twice queen of France, Anne was the daughter of Francis II (1435–1488) of Brittany and Marguerite de Foix. She was eleven when a French army defeated her father in the Fools' War in August 1488. Francis died a month after, and Anne inherited the duchy as the elder of his two daughters. Her hand in marriage became a valuable prize. In hopes of preventing the duchy from falling under direct French rule, Archduke Maximilian of Austria (later Holy Roman emperor; ruled 1493–1519), King Henry VII of England, and King Ferdinand of Aragon supported her against the French, and she agreed to marry Maximilian. In 1490 they were married by proxy, but the archduke delayed coming to Brittany. In 1491 French forces entered her capital of Rennes, and she was pressed to marry Charles VIII (ruled 1483–1498) of France. Convinced by her confessor that she was free to marry him, Anne agreed to a marriage contract that stipulated she would have to marry Charles's successor in default of a son from their marriage. The marriage took place at Rennes in December 1491.

Anne's marriage contract with Charles also stipulated that she would remain the ruling duchess of Brittany, and she always took a deep interest in its affairs while living at the French court, although it appears that she could not speak Breton. On several occasions she spent months away from her husband directing the affairs of her duchy. Those absences and that of her husband for sixteen months during the first French invasion of Italy (1494–1495) reduced the opportunities for Anne to become pregnant. She gave birth to a son, Charles Orland, a year after her marriage, but he died of measles at age three. Two more pregnancies resulted in a stillbirth and a son who died after five weeks.

When Charles VIII died suddenly in April 1498, Anne became a widow at age twenty-one. Her obligation to marry his successor, Charles's cousin Louis of Orléans (ruled 1498–1515), was complicated by his marriage to Jeanne of France, the daughter of Louis XI. Louis of Orléans requested an annulment from Pope Alexander VI on the grounds of coercion and nonconsummation. After his son Cesare Borgia was properly rewarded with French titles and treasure, Alexander granted the annulment. In January 1499 Anne and Louis XII were married, making her queen of France for a second time, the only woman for whom that was true. Their marriage contract stipulated that Brittany would continue to be governed separately from France and that it would go to the second son from the marriage or, in default of sons, the second daughter. In the absence of any children, it would go to Anne's closest relative. She was determined to maintain the duchy's autonomy from the French monarchy.

During her marriage to Louis, Anne was a key adviser to her husband, and she served as regent for him during his several Italian expeditions and a serious illness of 1505. The primary duty of the queen, however, was producing a male heir. In that respect Anne was unsuccessful. From at least five pregnancies, two daughters, Claude (born 1499) and Rénée (born 1510) alone survived. Anne strongly supported the betrothal of her young daughter Claude to Charles of Austria in 1503. She was sharply opposed to the proposed marriage between Claude and Francis of Angoulême (ruled 1515–1547), the successor to the French throne in default of any sons from Louis. Anne despised Francis's mother Louise of Savoy (1476–1531) and was eager to maintain Brittany's autonomy, which she perceived would be easier to do with a foreign prince as its duke. Much to her anger, Louis wrote a will in 1505 that repudiated the marriage between Claude and Charles and required their daughter to marry Francis. It was only after Anne's death in 1514 that Claude married Francis. Louis quickly remarried, to Mary Tudor, Henry VIII's sister, but he died in 1515 without having a child with her. Francis, Louis's son-in-law and cousin, became king, and he undid Anne's determined efforts to keep Brittany autonomous by making his heir its duke in 1534, thereby absorbing it into the royal domain.

Anne was a patron of artists and writers. Her most notable commission was for the splendid funeral monument for her father at Nantes.

Matarasso, Pauline. Queen's Mate: Three Women of Power in France on the Eve of the Renaissance. Brookfield, Vt., 2001. Study of Anne and two other powerful women of her era, Anne of Beaujeu and Louise of Savoy.

Queen consorts of France and Duchess of Brittany, Anne was a wealthy patroness of Renaissance art and music who devoted her life to keeping Brittany independent of French control. Born in Nantes, a port city of the Breton coast, she was the daughter of Duke Francis II and Margaret of Foix. Brittany had remained independent of France even after the defeat of England by the French at the close of the Hundred Years' War. Although Brittany fought the French armies to a stalemate in 1488, by the Treaty of Verger that concluded this war Anne was not allowed to marry without the approval of the French king. The only surviving child of her parents, Anne inherited her father's title when he died in a riding accident and left no male heirs.

In the French kingdom the Salic law prohibited women from reigning; the arrival of an unmarried girl as the nominal head of Brittany set off a diplomatic crisis between Brittany and France. To head off the claims of the French, a marriage was arranged between the twelve-year-old Anne and Maximilian, the Habsburg emperor of the Holy Roman Empire, long an enemy of France. The wedding took place by proxy in December 1490, without the bride and groom actually meeting to take part in a ceremony; at the insistence of France the marriage was soon dissolved by a decree from the pope. The French king Charles VIII then began a siege of Anne's capital at Rennes, which ended with the city starving and capitulating and Anne agreeing to marry Charles. The wedding took place at the chateau of Langeais, in the face of angry protests from the Habsburg dynasty, which claimed the marriage to be illegal.

As a result of her marriage to Charles, Anne was crowned as the queen of France in February 1492. She gave birth to four children, all of whom died before reaching adulthood. When Charles died in 1498 Anne was married to his successor, Louis XII, but also returned to Brittany, where she allowed a parliament of representatives to meet. Although Louis claimed the right to govern her duchy, she defied French claims on Brittany until her death in 1514. She had two surviving daughters by Louis—Claude and Renee. By her will the duchy passed to her younger daughter Renee; however, Louis forced the issue of Breton independence by decreeing Claude as the rightful heir to Anne's title. By the marriage of Claude to Francis of Angouleme, who became King Francis I in 1515, Brittany passed on the control of France.

"Anne of Brittany (1477–1514) ." The Renaissance . . Retrieved January 23, 2020 from Encyclopedia.com: https://www.encyclopedia.com/arts/arts-construction-medicine-science-and-technology-magazines/anne-brittany-1477-1514

Anne Of Denmark , Queen consort of King James I of Great Britain; b. Skanderborg, Jutland, Dec. 12, 1574; d. Hampton Court, England, March 2, 1619. Anne, whose parents… Anne De Beaujeu , Anne de Beaujeu Anne de Beaujeu (də bōzhö´), c.1460–1522, regent of France, daughter of the French King Louis XI. With her husband, Pierre de Beaujeu… Anne Finch Countess Of Winchilsea , Finch, Anne Anne Finch, the Countess of Winchilsea (1661–1720), was one of England's first published women poets. Today, some consider her to be Engl… Anne , Anne Anne (1665–1714), queen of England, Scotland (Great Britain from 1707), and Ireland (1702–14). The conventional picture of Queen Anne as a weak-… Anne Of Cleves , Anne of Cleves (1515–57), 4th queen of Henry VIII. The daughter of John, 3rd duke of Cleves, Anne was suggested by Thomas Cromwell as a wife for Henr… Husband , Husband A husband is a male partner in a marriage. Most cultures recognize this common social status with a specific affinal kinship term. In most ti…